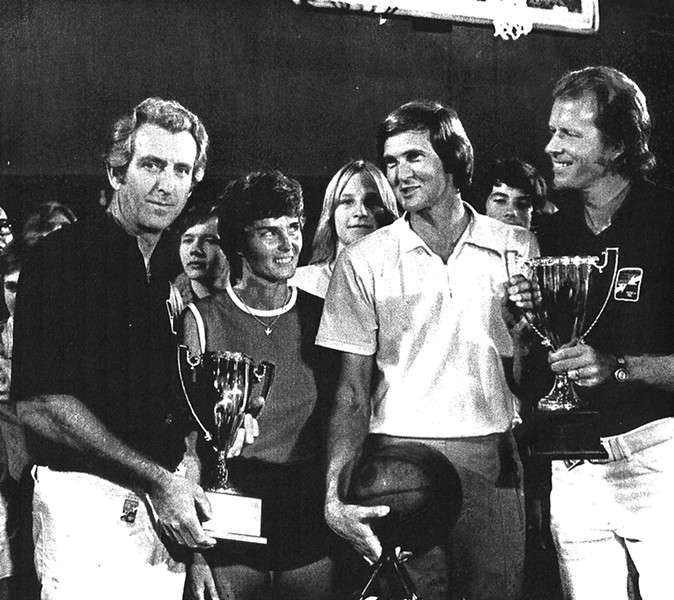 Courtesy of Mingos Bar Karen Logan and Jerry West in a teasing moment before their game of HORSE in Challenge of the Sexes, 1975.

Courtesy of Mingos Bar Logan being interviewed by Billie Jean King before the start of a race at the Battle of the Superstars, 1975.

When I was a kid, boys rode their Schwinns around Humboldt County neighborhoods, sneaked through the alleys and climbed on Main Street rooftops at night; they played pickup baseball games at the park in the summer. Each town had a sliding hill for cardboard on the dry grass, basketball courts and open gyms in Samoa and Scotia.

Funny, I never thought back and wondered what the girls were doing. But a few years ago I heard stories about how there was a girl in one neighborhood who got picked first whenever she showed up with her brothers and friends for a game of baseball, football or basketball. Her name was Karen.

In the 1950s and ’60s, there weren’t the same organized sports for girls in local high schools. There was a Girls Athletic Association (GAA) and many local schools participated, but sharing gym time with the boys was tough.

Title IX legislation moved sports toward gender equality in the 1970s but before that girls’ sports were limited at all levels. Even under Title IX, change was slow. For students at Fortuna High School, Damon Gym was the “boys’ gym” and Logan Gym was the “girls’ gym.” Thousands of students have gone through the door of that practice gym with the sign Logan Gym above the door, never knowing why it was called that.

Karen Logan came from the Campton Heights area of Rohnerville in the late ’50s and ’60s, then a hub of Southern Humboldt. She grew up in a house that butted up against the field of Toddy Thomas Grammar School, where she spent most of her time on the fields and courts by the small flat-roofed houses. It was a time when girls could not play Little League. It was too soon.

She went to Fortuna High School and became the star of anything she could do athletically. Her mentors were Dennis Kinser and Yvonne Rocha. Logan was like no one they had ever seen. She was fast, left-handed, tall and willowy, with great hand-eye coordination. She could do anything with a basketball.

One day, her mentors took her out to the boys track practice to see how far and high she could jump. She jumped 5 feet 6 inches using a now obselete, pre-Fosbury Flop method and she long jumped more than 18 feet. If Rocha hadn’t recorded it, I would not have believed it.

She was the best girl’s basketball player around, practicing with the boys and participating in the limited age of GAA. Tennis was the most organized of sports for girls and Kinser taught her the skills. Logan won an AAU Amateur title in Walnut Creek when she was a senior in high school. In a New York Times article, she once said, “I hated being a girl. Oh, I like being feminine, but there I was, so into sports, there was nothing for me to do. I was a girl.”

With no college basketball opportunities for women, she left for Pepperdine University after graduation in the fall of 1967 on an Athletic Achievement Grant, which eventually led her to train for the U.S. Olympic Track Team. The men’s basketball coach at Pepperdine let her scrimmage with the men’s team and he started a women’s team, the All American Redheads. Led by Logan, they played comedy basketball and traveled on the weekends from town to town in a van playing men’s teams. She did dribble exhibitions at half time.

She also qualified for the Olympic trials in 1968, running 440-yards in 54.9 seconds but tore her hamstring prior to the actual trials. In her final year at Pepperdine, she went out for tennis in the school’s first year of participating in NCAA tennis. She never lost a match as the team’s No. 1 player and considered a career in tennis, but, she said, “Basketball is my sport. I am good at lots of sports but in basketball, I am super.”

Basketball it would be. She played for the Indianapolis Pink Panthers in a semi-pro league but tired of comedy basketball and show leagues. So she pioneered the start of the women’s basketball professional circuit (WBL) playing for Chicago.

She was billed the No. 1 basketball player in the country, scored 23 points per game during her career and continued to do dribbling exhibitions. Because of her stardom and a Sports Illustrated article, she was courted by both ABC and CBS for programs to give women athletes more exposure.

ABC started a series called The Battle of the Superstars in 1975 where the best female players in each sport were picked to compete against each other in the softball throw, the 60-yard dash, the 440-yard run, bowling, tennis, bicycle racing, swimming, obstacle course and others. Qualifying to compete in the finals with her were such stars Cathy Rigby from Gymnastics, volleyball player Mary Jo Peppler, skier Kiki Cutter, diver Micki King and seven others.

The event was chronicled in James Michener’s classic book Sports in America, where he said, “Peppler could only watch the last event as Logan ran the obstacle course beautifully to clinch the championship… . but an eagle eye official detected that Karen had not properly gripped the last bar of the 12 monkey bars. Karen had lost first place and was placed second and lost a whole bundle of money.” Peppler, of Olympic fame, convinced Logan to come to Texas and learn volleyball. She played well enough professionally to be endorsed by Coca Cola. She also convinced Peppler and others to come back to Fortuna to play an exhibition charity against the Oakland Raiders. The Raiders did not particularly like her, as she just wanted to win and not flirt.

The same year as the Superstars, Billie Jean King beat Bobby Riggs in tennis in the widely televised Battle of the Sexes. Due to that, CBS started a program called Challenge of the Sexes in 1975. Logan played and beat Jerry West, one of the greatest shooters in history, in a game of horse. She was also beating Oscar Robertson when he complained about her trick shots like spinning a ball on her finger and bouncing it off her head into the basket and argued that her outside jump shot wasn’t the same as his. The officials agreed with him.

Logan was still playing professional basketball but the Women’s Professional League was underrepresented and non-union. As a leader, Logan was contacted on the sly by the NFL Players union to try to Unionize. When word got out, her new team in New Orleans fired her and she was blacklisted. She decided to move on to a different life.

Logan had worked for equal rights for women’s sports and set the tone for Title IX. Many visiting high school girls’ teams who dressed in Logan Gym and played in Damon Gym were probably also unaware of the work she did moving women’s sports forward. She blazed trails for female athletes to follow but was herself born too soon.

Karen Logan is 71 years old now and works relentlessly as a licensed clinical social psychologist in Provo, Utah. When she has time off, she lifts weights and plays as much golf as she can. I bet she’s good.