Bouncing Sonar Off the Public 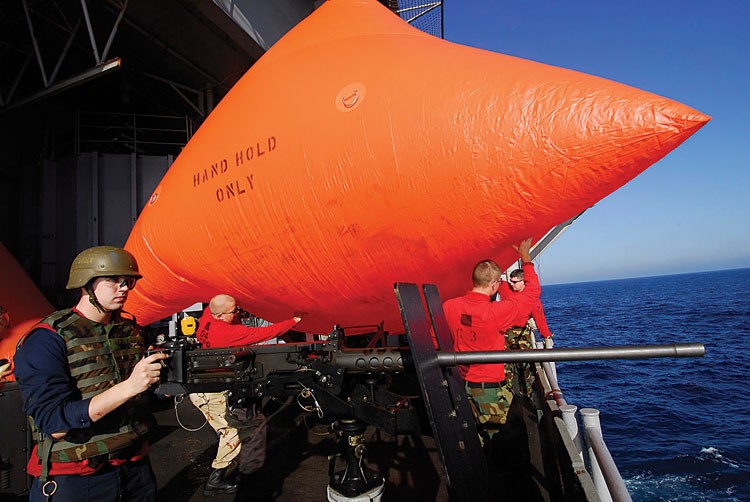 With the high seas awash in piracy, enemy submarines and unpredictably swirling geopolitical currents, the U.S. Navy wants its fleets ready to meet any potential threat. Readiness, it says, requires extensive training exercises on and under the ocean's surface and in the air above it -- with missiles, explosives and sonar. The Navy says caution, surveillance and science can be used to minimize the chances of marine animals becoming collateral casualties of this training.

A U.S. Navy contingent will come to Eureka on Thursday, March 22, to engage with the community as it pursues renewed environmental authorization for activities in its Northwest Training Range Complex. The area includes 162,000 square nautical miles of waters off of Northern California, Oregon and Washington. It spans from the coastline west to about 250 nautical miles offshore, and from the waters off Shelter Cove north to the Strait of Juan de Fuca. Picture an aquatic area slightly larger than Montana. (The Navy's Northwest training areas also include facilities in Puget Sound; near Ketchikan, Alaska; and on about 800 acres of land in Washington.)

Billed as an "open house" rather than a public hearing, the March 22 event -- from 5-8 p.m. at the Wharfinger Building -- is part of a nine-stop Navy tour to inform, and hear from, coastal communities about the environmental impacts of training activities in the complex from 2015 to 2020. (Currently, more than 95 percent of the Navy's training in the complex takes place in a sector off the Puget Sound called Warning Area 237.)

In 2009, the Navy held similar sessions to inform the Environmental Impact Statement covering its current training and testing. Many of the public recommendations at the time echoed a simple refrain:

"Damn the torpedoes. Give the whales a break!"

A sense of the scale of the pseudo sea battles can be gleaned from the Navy's 2009 "Complex Biological Evaluation" for the Northwest Training Range Complex.  In it, the Navy proposed annual offshore actions involving 34 high explosives, 110 "bomb dummy units," 57 missiles (with names like "Sparrow," "Sidewinder," "Harpoon," "Maverick" and "HELLFIRE"), about 50,000 gun shells, 117,000 rounds of machine-gun fire, 231 flares, nearly 500 targets (including 120 dumpster-sized, heavy-duty inflatable red bags called "killer tomatoes") and the deployment of 886 mid-frequency sonar buoys and 631 other active-sonar devices. What the Navy actually used is classified information.

Sonar may have a nice ping to it when it reveals a deadly threat to a ship full of sailors, but the intensity and pitch of its sound pulses can injure and disorient whales. Indeed, many of the concerns voiced by the public and environmental review agencies have focused on the potentially debilitating impacts of active sonar on whales and other marine mammals.

Many biologists contend that not enough is known about the physiological and behavioral changes that sonar prompts in whales, particularly in deep-diving beaked whales.

Pat Higgins is a fisheries and watershed biologist and member of the Humboldt Bay Harbor, Recreation and Conservation District. Three years ago he questioned the Navy's ability to gauge the impact of its training activities, citing a paucity of data on the distribution, abundance and behavior of whales, dolphins and porpoises.

"My concerns from a couple years ago are still germane," says Higgins. "The Navy doesn't know what it's doing out there in terms of interaction with wildlife because they've collected no local data that could be a foundation for useful models."

Higgins believes that the Navy's aerial observers will have difficulty spotting beaked whales in the training area. These whales dive to great depths, and when they "come up to sip air," Higgins says, they barely make a ripple.

"When it comes to beaked whales," he says, "the Navy's flying blind."

As it has previously, the Natural Resources Defense Council filed suit Jan. 26 to prompt greater protections for marine mammals in the Navy's Northwest training plans. According to the nonprofit environmental group, about 355 whales have been stranded during military activities worldwide since 1985. About a third of those were beaked whales. In a 2004 incident, about 200 melon-headed whales ended up on the shores of Hawaii in the wake of a seven-nation Pacific Rim training exercise.

The Navy is not disinterested in these environmental impacts. It reports spending $18 million to $26 million annually for marine-mammal research conducted by universities and nonprofit oceanographic institutions. In 2009 the Navy was part of a 10-agency federal task force on marine mammals and man-made sounds; the group's top priority was to find out more about the negative impacts and how to mitigate them.

Meanwhile, back on land at the Wharfinger Building, mitigation will be a topic at one of the tables set up for the March 22 open house. Other tables will focus on the importance of training and testing with sonar, public access and safety, marine protections and the National Environmental Policy Act (NEPA) process. NEPA requires federal agencies to develop an environmental impact statement that evaluates several alternatives for a proposed action.

According to Navy spokesperson Liane Nakahara, "We want public comment so we can refine what to analyze. It's just the beginning of a very long process."

Data drawn from past public comments suggest that, when it comes to whales and sonar, some humans will come to listen, some to ask questions, and some to give the Navy an earful.