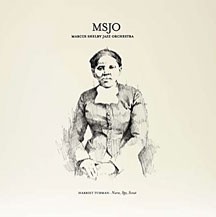 History is only as memorable as the current stories we tell about the world. The preference to remember past events in a charitable or patriotic light transforms ideas, events and people who are then filtered through the current discourse to explain their relevance. Marcus Shelby's musical suite dedicated to Harriet Tubman is a good example of re-presentation, the re-articulation of Tubman's story through lyrics, composition and performance.

The collection is musically stunning. Grounded by Shelby's musical research, the collection offers a combination of jazz, big-band and innovative music — not exactly to tell Harriet Tubman's story, but to point the listener to the idea that there is more to Tubman's tale. Songs like "Ashanti Stomp" and "I Will Not Stand Still" offer poignant invitations to reconsider what we might know about Tubman, and at the same time they are wonderful pieces of music.

The perception that the Underground Railroad was a charitable institution run by privileged people who realized the evils of slavery and hid African slaves in their attic is pervasive, but not accurate. In fact, Tubman was known as "The General" and was a leader in a much larger struggle, one that Marcus Shelby and his musical colleagues invite the listener to explore.

"Stampede of Slaves" begins with a tentative stroll and builds to a frenzied movement with explosive solo work by Gabe Eaton on the alto sax and Mike Olmos on the trumpet. The song offers a musical explanation of Africans fighting against institutions of slavery through the Underground Railroad with more than white charity going on.

Kersplebdeb Press author Butch Lee describes an 1860 struggle to free Charles Nalle, a fugitive who was captured in Troy, N.Y. At his trial, where his "owner" was suing for Nalle to be returned to his property in Virginia, Harriet Tubman snuck into the courthouse and as soon as Nalle was ordered back into slavery, helped to break him out of the grasp of police. A struggle quickly ensued. A newspaper reported: "The crowd at this time numbered nearly a thousand persons many were black and good share were of the female sex."

After a bloody escape via a rush across a river, Nalle was recaptured by federal agents and locked up. Harriet Tubman arrived minutes later with more than 400 anti-slavery activists. Facing gunfire and clubs, they charged the locked office. Despite having several of their group cut down, a crew of mostly African-American women broke through the doors and pulled Nalle out, and he successfully escaped to freedom.

Marcus Shelby's suite points to the disconnect between the many stories that have been told of Tubman as a lone activist with the reality of large-scale anti-slavery actions. Songs like "I Will Not Stand Still," (which positively swings in the middle) and "Go Down Moses" help us to imagine something different than the perception of anti-slavery movements as made up of privileged North Americans, maybe even understanding that Africans were at war with slavers and slavery.

Battling the misunderstandings of Tubman's life means challenging the stereotypes (then and now) about women, and Africans. Shelby was inspired by Kate Larson's book on Tubman, Bound for the Promised Land, to create this musical piece.

The music on this collection is so good it could be argued that a listener could just enjoy the tunes. Shelby is a renowned bass player, and the loping connections made by his playing tie the horns and voices together in buttery-smooth eloquence. "Black Suffrage Blues" is a good example of just how potent his band can be. In this case, the exceptional musicianship only contributes to the reflective space; it is simultaneously invitational and subversive.

The Marcus Shelby Jazz Orchestra performance of Bound for the Promised Land: Harriet Tubman is the keynote of Humboldt State University's Social Justice Summit. Join the conversation on Friday, March 7, at 7 p.m. in HSU's Van Duzer Theatre and experience astounding music and a genuine reflective space.