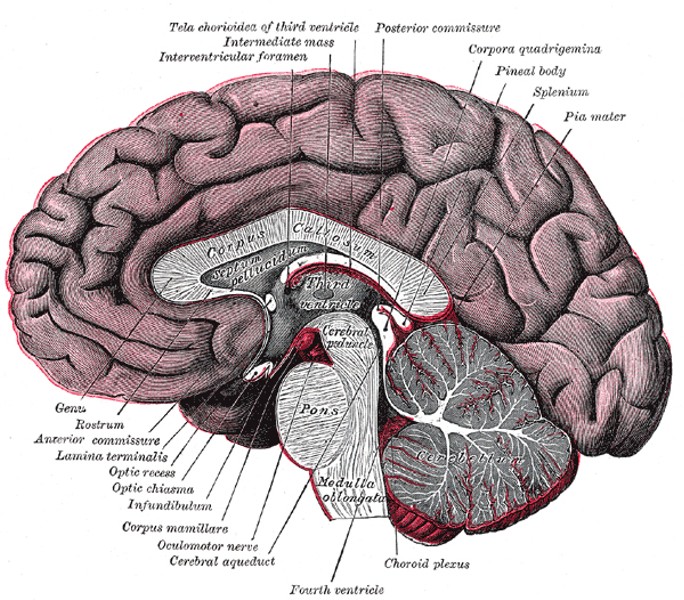 1918 Gray's Anatomy Corpus callosum, the nerve bundle linking the brain's right and left hemispheres, is the light gray structure in the middle of the diagram.

Myths about the brain are easy to come by and hard to dispel. Here are a handful that keep cropping up:

You are either "right-brained" or "left-brained."

The idea stems from experiments performed on "split-brain" patients in the 1960s by Roger Sperry and Michael Gazzaniga at Caltech. In cases of extreme epilepsy, doctors sometimes resort to severing the corpus callosum nerve-bundle that links the brain's twin hemispheres. While this often provides relief from seizures, communication between the two sides of the brain is sharply reduced, making it possible to analyze differences in the two hemispheres. The researchers were able to show that the left hemisphere is dominant in speaking and writing, while most nonverbal, spatial processing takes place in the right, giving rise to the "left-analytical, right-intuitive" dichotomy of pop-psychology.

It's far more complicated than that. Most of our behaviors essentially use all parts of our brains, and what's going on in one hemisphere is usually complemented by activity in the other. For instance, the part of language processing that affects intonation and emphasis mostly takes place in the right hemisphere (with the left-right roles often being reversed in lefties). Also, patients with injuries in one hemisphere are often able to "train" the other hemisphere into taking over the damaged functions.

Brains are "rewired" moment-by-moment, even while we sleep. That is, they are constantly making and breaking connections. Brains appear to thrive on novelty, so once they're sated with violence and/or sex, they'll find something else to latch onto.

Your brain is separate from your mind.

French philosopher Rene Descartes promoted the idea of "dualism," with our immaterial minds floating separately above our brains and somehow communicating via the pineal gland deep in the brain. Philosopher Gilbert Ryle, among others, effectively rebutted the notion, which he called the "ghost in the machine" fallacy. Nowadays, it's easier to think of "mind" as a verb, as in, "Lungs breathe, brains mind." (Another popular shorthand views mind as an "emergent property" of the brain.)

The brain is basically a computer.

This tempting analogy fails on many levels, including: (1) Brains are much (much!) bigger than any current computers; (2) Brains and computers function differently — brains are massively parallel computing machines that process far more at once than computers, which are modular (working in sections) and serial (working in a sequence), and so much less integrated; (3) Neurons aren't as simple as binary switches.

Doesn't this tired old myth know when to die? Don't worry, you're using all of your brain, although functional MRI and PET scans do show that different parts are more involved in different activities. But over the course of a day, all parts of your brain are busy. Brains are energy gluttons, using about 20% of your body energy while only making up two percent of your body weight, so it's hard to see why evolution wouldn't have dumped that mythic 90% dead weight long ago.

Barry Evans' (barryevans9@yahoo.com) brain is just along for the ride, unlike his Field Notes anthologies (available at Eureka Books and Northtown Books), which think they're only along to be sold.