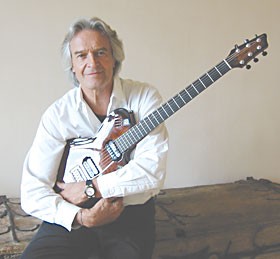 The great jazz keyboardist Joe Zawinul died last week. News of his passing spurred me to dig out my copy of In a Silent Way , the sublime Miles Davis album that took its name from one of Zawinul's tunes. I bought the record when it came out at the end of the '60s -- not realizing it would prove a sea change in the music world, the beginning of a merger between jazz and electrified rock that some journalist later dubbed jazz fusion. The Silent Way sessions included saxophonist Wayne Shorter and three electric piano players -- Zawinul, Chick Corea and Herbie Hancock (who incidentally has a gig at HSU Nov. 9) -- Tony Williams on drums and two Brits who'd just come to New York, bassist Dave Holland and guitarist John McLaughlin . In an interview in Sunday's SF Chronicle Pink Section, McLaughlin recalled his instructions on how to play the complex chords in Zawinul's song. "Play it like you don't know how to play the guitar," Davis told him. That may well be the exact point that jazz guitar took a paradigm shift. McLaughlin came up with something different, expanded on it in subsequent albums for Davis like Bitches' Brew , and made history in the process. McLaughlin would go on to defy expectations again and again, exploring Eastern sounds with his electric Mahavishnu Orchestra and merging acoustic jazz with Indian classical music in his band Shakti with Zakir Hussain on tablas (Zakir will be here Sept. 30 with Mickey Hart 's Global Drum Project ).

At this point in time McLaughlin is back to fusion with a neo-bop album, Industrial Zen, and his first American tour with an electric band in nine years. John McLaughlin and the Fourth Dimension includes Gary Husband from Level 42 on percussion and keys, drummer Mark Mondesir from Jeff Beck's band and French bassist Hadrien Feraud . This weekend McLaughlin and 4-D play the Monterey Jazz Festival and a preview for the San Francisco Jazz Fest before heading to Humboldt for a show Sunday at the Van Duzer. Prepare for amazement.

I sent a copy of Zawinul's obit to local keyboard wiz Mike Kapitan , mainly because his M. Davis tribute, Miles Ahead, draws heavily on Miles' electric years. He wrote back acknowledging Zawinul as one of his "major keyboard influences." He also dropped a line this week to say that Miles Ahead is returning to Muddy's Hot Cup this weekend. "We've finally found a new trumpet player, Brad Werren , and will be playing at Muddy's Saturday [Sept. 22]. We're also working more original material into the set. Line-up is moi [as in Mike] on keyboards, Rich Bradley on tenor/soprano saxes, bass clarinet and guitar, Anna Pfiefer , basses and Mike LaBolle , drums." The show should prove a great warm-up for Sunday night.

There was a time when Slightly Stoopid was routinely described as "slightly sublime," a reference to the Long Beach bad boys who were their original role models. Founding members Kyle McDonald and Miles Doughty were still Ocean Beach high schoolers when Bradley Nowell signed them to Sublime's Skunk label. That was more than 10 years ago -- Miles and Kyle have matured quite a bit since as has the Stoopid sound -- a new release, Chronchitis , is evidence. Not that they've abandoned the tried-and-true SoCal skate/surf/stoner/ska-punk vibe, that's still there, but they've stretched in new directions incorporating hip hop, mellow Jack Johnson-esque folk jams and plenty of reggae.

On "2 a.m." they lay down a percolating Caribbean beat and overlay '80s Brit Two-Tone horns to tell a tale of a late-night dope bust. "That's just a bad-attitude-toward-the-cops song," says McDonald. "It's about the police holding up the innocent when they could be doing better things with our tax money instead of going after skateboarders, pot smokers and people who park in the wrong spot. It's about a lot of people's lives, a lot of people go through that situation where they're just sitting in their house and in comes someone who just ruins them, and over what, a plant?"

The band's fans (Stoopidheads) already know about the Stoopid tour with The Supervillains, a like-minded ganja-centric ska/punk/reggae band from Orlando. The two bands hit Eureka next Tuesday, Sept. 25, for a show at Indigo Lounge.

Got a call this morning from Jane Williams, aka Universalia Jane , about the time I'd noticed she's playing Saturday at the Jambalaya. Being the generous sort, Jane wasn't actually calling about her gig, instead she wanted to make sure I knew that Myshkin's Ruby Warbler is on the bill that night. "They are just amazing. I love them," she told me, heaping on praise. "Myshkin is one of the best songwriters out there." She went on to describe some of the songs on the Warbler's latest, Sigh Semaphore -- " quiet, hard, and gorgeous political songs about lying leaders, stolen resources, and drowning cities," according to the publicity folks -- touching on the troubles in Myshkin's former hometown, New Orleans.

When I tried to turn the subject back to U. Jane's jazzy work, she let on that she's "getting back into the swing of things" and recording some new songs with Tim Gray (more praise), but she soon changed the subject to Derrick Mendes ' solo gig Friday night at Jambalaya and Derrick's new trio ("gonna be great"). She thought the Jam show was a songwriter night, which confused me since Derrick is opening for two bands, World History and Luminous Craft . Well, it turns out that Luminous Craft is one Dominick Campbell, a visual/folk artist from New Mexico who sometimes performs "with help from Neil Campau ," a folk/punk songwriter from Seattle, aka World History, who frequently plays live with "guest Dominick Campbell ," and so on.

Did you check last week's cover story, "Humboldt Hip Hop"? A number of the featured artists are at the Red Fox this weekend: On Friday Nac-One and the Fabulous Fam join battle-rapper Franco from the Dirty Rats, Opti-Pop and Humanoids from the Deep . Subliminal Sabotage is in the house Saturday.

Meanwhile Mazzotti's has Handkufz , a rapper from San Jose, Friday and Saturday including an early show Saturday for under-21 only.

Saturday at Six Rivers it's The Republican Duck Hunters with rappin' T-S Fat Guy Chris Durant sharing a bill with Anchorite & Mystic , a folk/goth outfit that includes the other Fat Guy, James Faulk , on lead guitar. Note: A&M ain't hip hop; they declare themselves "your source for murder ballads."

I'm guessing EOTO (End of Time Observatory), the "live improvised looping project" of String Cheese Incident drummer Michael Travis and percussionist Jason Hann bares little resemblance to SCI. Instead it draws "from the ethos of some of the great DJs and computer artists of the world," with guitar, bass, keys and percussion digitally manipulated into dance grooves suitable for hula hooping. They're at the Red Fox Monday, Sept. 24.

If you've read Vonnegut, you know Billy Pilgrim as a character with an unusual relationship with time. The Billy Pilgrims on the other hand are an old timey quintet from Colorado on the way to Humboldt for two shows: next Tuesday at Six Rivers and Wednesday Muddy's Hot Cup. (Of course if you're aware of time as the fourth dimension you could have already seen those shows.)

As I left the DJ Shadow/Cut Chemist 45-athon Monday night a friend from SoHum handed me a handbill for an Autumn Equinox reggae show Saturday on property right next to Dimmick Ranch. Veterans Don Carlos and Junior Reid (and Reggae Angels ) top a bill that includes Ishi Dube and several bands I haven't heard of. Showtime is 4:30. Tickets aren't cheap ($75) but camping and parking are free. Have a good time.

Remember the pair of concerts in July that were supposed to feature Judgement Yard, Sizzla's "fiyah blazing" Bobo Ashanti Rasta brethren? The Judgement crew never showed; the promoter got burned. An early September show that moved from one club to another before being cancelled was re-scheduled for this week. Now that show's off too. A note on Sizzla's website indicates that, "as far as I & I Judgement Yard rasta youths are concerned, anything that may appear as a setback is really a setforward and a step forward. Judgement Yard will forever forward on." Does that sound as Billy Pilgrim-ish to you as it does to me?