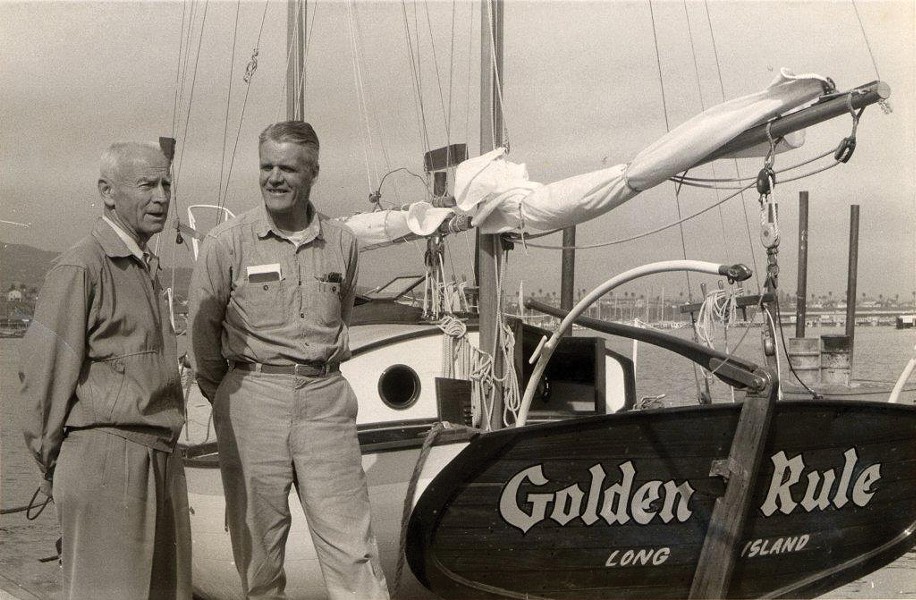 photo by Heidi Walters Leroy Zerlang, left, and Chuck DeWitt and Nate Lomba of Veterans For Peace with the beat-up Golden Rule in her current home at Zerlang’s boat repair dock on Humboldt Bay.

Last Wednesday, out at Zerlang and Zerlang Marine Services' boat repair yard behind Fairhaven Business Park on the Samoa Peninsula, Hank, the black yard dog, and two other canines whirled about the beach playing tug o' war with a large feather and rolling on a crackling blue and gray tarp in front of the massive, drydocked fishing boat Nanbellis Jo, from which the whine of power tools erupted. A few yards down the beach the Ajax, a tiny but powerful tug boat painted half black and half the color of dried blood and girded with old tires, was ready to be lowered down a set of rails back into the bay.

On the other side of the Nanbellis Jo, between a junk pile and the bay, a 30-foot wood boat tilted on its keel, adrift in beach sand. Though obviously once graceful, she looked like her future might lie in the junk pile rather than the bay: Her red belly was scarred, her equally paint-peeled white hull had been gored by something log-large in at least two places, and her deck was splintery. She'd been stripped of her cabin, bunks, engine, water tanks, rigging and masts.

But Leroy Zerlang, in his sawdust-brown coveralls, stood nearby gazing fondly at the battered vessel. Beside him, Chuck DeWitt and Nate Lomba, members of Veterans For Peace, also cast her long, affectionate looks. This was the Golden Rule, the 30-foot double-masted ketch that began its life as a pleasure yacht but was enlisted, in 1958, by Quaker peace activists to sail from Los Angeles to the Marshall Islands to disrupt the United States' atmospheric nuclear weapons testing there. She tried twice but didn't make it, thwarted outside of Honolulu by the Coast Guard and, the second time, her four crew members jailed. The Golden Rule's skipper, Albert Bigelow, wrote a book about the missions, and a subsequent, successful attempt by the Phoenix, in the memoir The Voyage of the Golden Rule. The Golden Rule's mission invigorated the then-fledgling anti-nuclear movement -- even inspiring the creation of Greenpeace -- and that movement eventually led to the signing of several nuclear disarmament treaties, according to Lawrence Wittner, a history professor at SUNY Albany, who researches social movements. Wittner has written several books on activism and how it helped end the arms race, including the recently published Confronting the Bomb. He also recently wrote an article for the History News Network specifically about the Golden Rule's role, and about how she now languishes in Zerlang's boat yard.

But how did the Golden Rule end up in Eureka? And what will become of her?

We can answer the second question: The Garberville and Humboldt Bay chapters of Veterans For Peace plan to restore the Golden Rule and relaunch her on peace-awareness missions up and down the coast. Last week, the Humboldt Bay Chapter voted to donate $1,000 toward her restoration. But it'll take tens of thousands more to fully restore her, said Zerlang last Wednesday out at the boatyard. Zerlang has offered space at his yard for the repairs, and will serve as consultant to the project.

The first question is more difficult. Zerlang said the Golden Rule is owned by Eureka doctor Laurence Badgley, but he doesn't know how Badgley came to possess her. Wittner, reached by phone this Tuesday, doesn't know her history post-1958 either. And Badgley could not be reached.

Zerlang said Badgley had her docked for six or seven years at Woodley Island Marina before re-anchoring her on his property on the peninsula south of Fairhaven. Last year, she broke loose and washed up on the beach.

"And my son Cody and I went down and towed her off the beach, because we have a love for old boats," said Zerlang.

She was only a little banged up. The Zerlangs hauled her out of the water into their yard, put some paint on her, and brought her back to Badgley's. Then, this March, she got caught in a big storm and was battered and sunk.

But then local shipwright David Peterson told them she could be fixed. Which really pleased Leroy Zerlang.

"She's a wood boat," he said. "She's an Alpha-30, which is a smaller version of a Sea Witch, a type of boat that was designed by Hugh Angelman, who's world famous. She's a tall ship, and I love tall ships. And she's unique; she has that history. And her life really needs to be saved."

On Tuesday, by phone from Albany, Wittner said it's important for people to remember what the Golden Rule stands for, and to realize that the world still hasn't reached full nuclear disarmament.

"We live with 23,000 nuclear weapons in the world today, and most of them are more powerful than the bomb that destroyed Hiroshima," he said. "And, therefore, the world, ever since 1945, has been living on the brink of doom. So it's very important to remember this part of the world's history. This is not a dead issue; this is not the temple of Tutankhamen. This is something with us today that threatens the world's future."