The moral desert of War Dogs 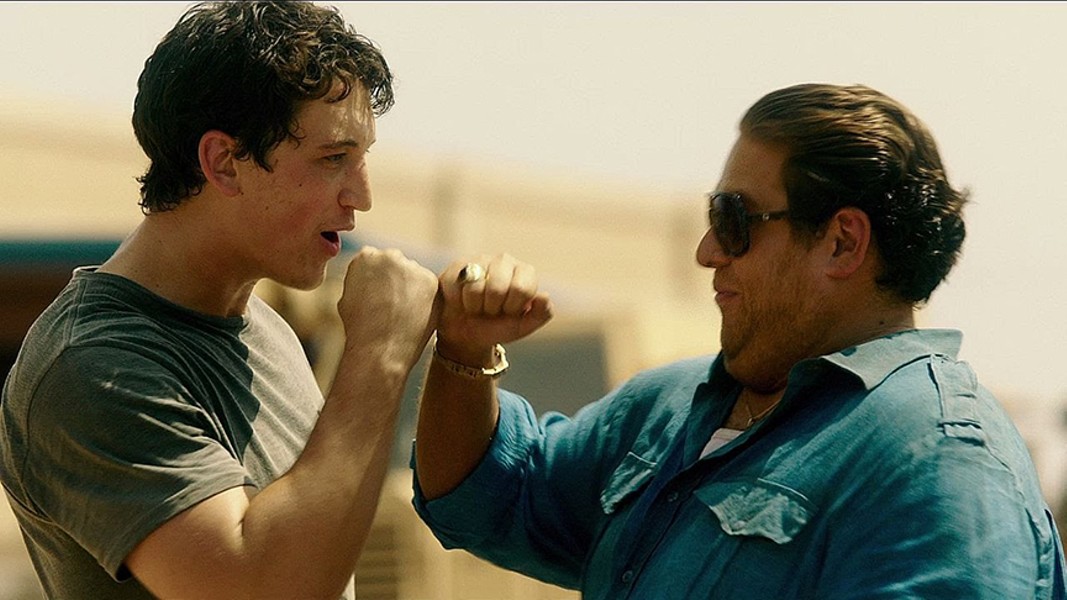 See, dude, we don't need DiCaprio to carry this thing.

WAR DOGS. War, as we know, is profitable — in fact, it's a whole economy, as War Dogs makes sure to tell us right at the beginning. The film, directed by Todd Phillips, is based on a 2011 Rolling Stone article by Guy Lawson about two 20-somethings who sell weapons to the Pentagon. And that's the most terrifying thing about this movie — it's real.

The backstory for the film, as one character tells another, goes like this: It seems that after President George W. Bush got into trouble for giving exclusive weapons contracts to Dick Cheney's company, the government opened up military contracts for bidding on its website, FedBizOps. The big boys get the big contracts, of course, but there's still lots of money to be made from the "crumbs" — ammo, guns, helmets — all the things a soldier needs. In fact, the movie tells us that it costs us, the taxpayers, $17,500 to outfit a soldier, and that stuff's got to come from somewhere, right?

This is where the two dudes come in. David Packouz (played solidly by Miles Teller), an earnest, yet drifting college dropout working as a massage therapist for wealthy men, reconnects with his high school buddy, Ephraim Diveroli, at an Orthodox Jewish funeral in their hometown of Miami. After the funeral, they ride through the streets in Ephraim's car in search of pot. When drug dealers stiff Ephraim, we get our first glimpse into what he is capable of.

Ephraim convinces David to come work for him at AEY, the company he's set up for bidding on government contracts, and the two begin working long nights scanning new contract opportunities on the website. When they're not doing that (and sometimes when they are doing that), they're partying. Cocaine, pot and lots of alcohol fuel their greed. They work, they party, they spend. And then, believe it or not, trouble arises.

Jonah Hill, with greasy, slicked back hair and sporting more than a few extra pounds, eats up the part of Ephraim. A greedy young sociopath who employs an infectious giggle to put others at ease and get what he wants, his genius is in playing others — in any way they want to be played. For example, when the two need financing for their first weapons deal, they pay a visit to a friend of the family, a devout Jew who runs a string of dry cleaning businesses, and whom Ephraim convinces that he's only buying the weapons to help Israel. (It's a lie; the money's going to supply pistols to the Iraqi army.) David is as timid as Ephraim is blustery. He goes along with Ephraim's plans, which get crazier and crazier, until he finally has to assert himself.

Bradley Cooper, masked in sunglasses, plays an opaque arms dealer on the terrorist watch list, with whom Ephraim and David meet at an international weapons expo in Las Vegas. Filmed in the U.S., Morocco and Romania (It wasn't feasible to film in Iraq? Huh.), Lawrence Sher's cinematography gives the believable backdrops of Jordan, Iraq and Albania a scary, foreboding bleakness.

There are plenty of absurdly funny, stoner-weapons-dealer-antic moments, like when Hill tries to buy a pair of sunglasses right off the face of a Jordanian smuggler, or when the pair do bong hits in the darkened offices of AEY while wearing night-vision goggles. There's also a cameo by the real David Packouz in the role of a singer/guitarist playing "(Don't Fear) The Reaper" to a captive nursing home audience, which had me laughing out loud.

Ana de Armas, as Packouz' girlfriend, is completely unnecessary, since the role requires the acting abilities of a lawn chair. She doesn't seem to do anything except wait for David to come home, throw an occasional dinner party, and have a baby. But then again, women aren't the doers in this film, they're the done-to. Which gets me to what is left out of this story: the other half of the equation — the tragedy, the lives lost and ruined as a result of all of these weapons. Because, lest we forget, they have died mainly because it was profitable, somehow, to kill them.

Still, the movie succeeds nicely in showing us the terrifying world of war profiteering while at the same time creating two likeable and immensely fallible characters. And the filmmakers probably figured audiences would rather watch the bad guys chasing two dudes through the Triangle of Death (on the road from Jordan to Iraq) than have to look at all of that nasty reality. And they're probably right. R. 114m. BROADWAY, FORTUNA, MILL CREEK.

MECHANIC: RESURRECTION. Jason Statham is in and out of his shirt again as a retired hit man (surprise!) pulled in for one last job. With Jessica Alba and a soul-patch-sporting Tommy Lee Jones. R. 99m. BROADWAY.

SPACEBALLS. May the Schwartz be with you for this revival of the 1987 Mel Brooks Star Wars parody. PG. 96m. BROADWAY.

SUICIDE SQUAD. This unremittingly awful mess of semi-random violence rattles on without any emotional or narrative center as DC Comic villains take on badder guys. With hope from Margot Robbie as Harley Quinn and Jared Leto (briefly) as the Joker. PG13. 123m. BROADWAY, FORTUNA, MILL CREEK.