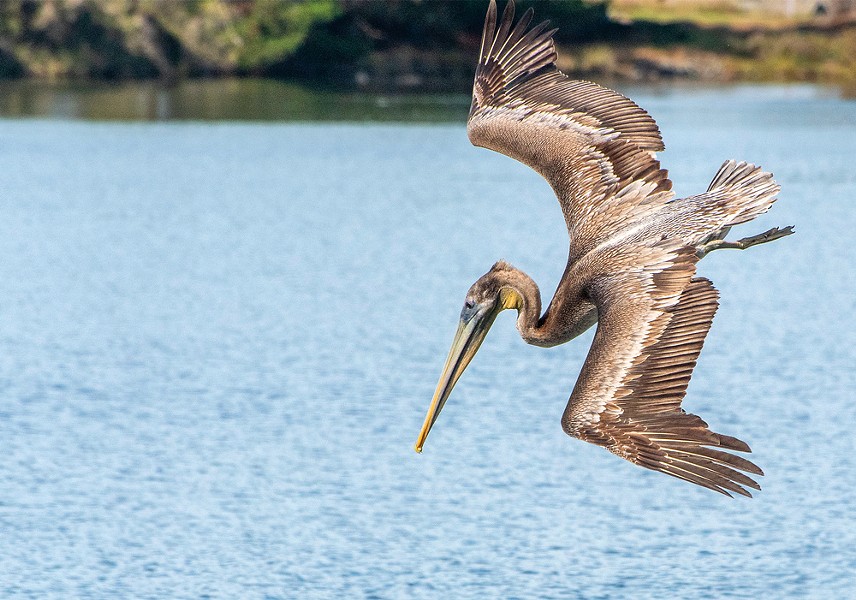 Photo by Mark Larson A brown pelican diving down for a fish. 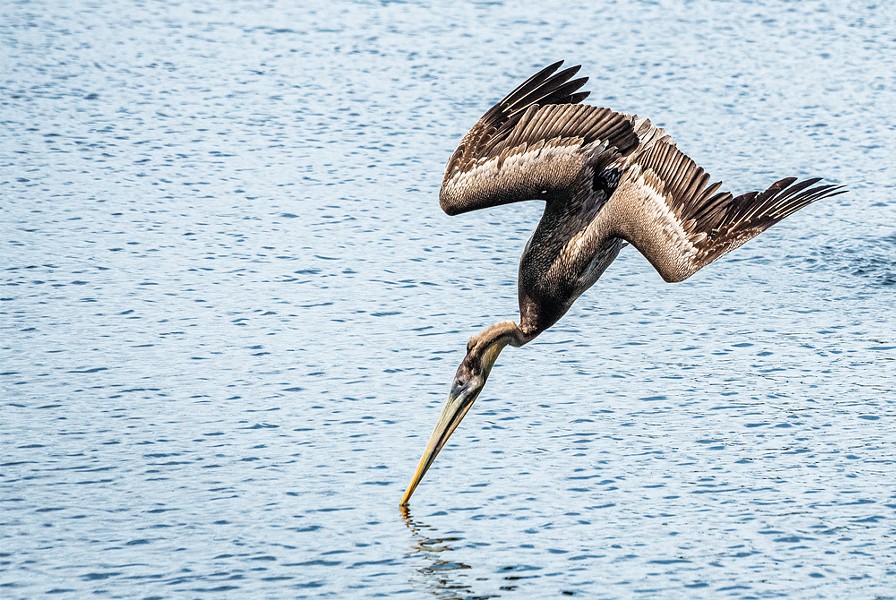 Photo by Mark Larson A brown pelican diving down for a fish.

A large group of pelicans has been called a "brief," "pod," "pouch," "scoop" or "squadron." July through November is peak season locally for viewing brown pelicans in numbers at my favorite location at the Arcata Marsh and Wildlife Sanctuary.

On the Endangered Species list until 2009 due to the effects of pesticides, these long-lived (25 to 30 years) birds are the only pelican species we're likely to see locally. They head south to nest in the winter to Southern California and Mexico. Other good viewing opportunities can be found along Elk River Slough and the Hikshari' Trail in south Eureka, Humboldt Bay piers and pilings, and at river mouths along the ocean. I recently saw a large "squadron" gracefully gliding by Wedding Rock at Sue-meg State Park.

The next time you see brown pelicans diving for fish, watch carefully to see how they twist their bodies, heads and that large bill to the left as they "crash" into the water with a splash to pursue small fish. Using their keen eyesight to spot prey and diving from high up, they use the force of their impact in the water to stun the fish and then scoop them up. According to local bird-guidebook authors Burton & Anderson, this behavior is known as "plunge diving," a method shared with osprey, terns and belted kingfishers. According to other sources, the brown pelican tucks its head and rotates its body to the left to cushion its trachea and esophagus on the right side of the neck from the impact. Air sacs beneath the pelican's skin cushion the impact and help it resurface.

Brown pelicans are described as "a comically elegant bird with an oversized bill, sinuous neck, and big, dark body," on allaboutbirds.org. But Burton & Anderson suggest these unmistakable large birds with a huge wingspan should be called gray pelicans, as only the juveniles are brown. Mature Pacific Coast males and females both have white heads with pale yellow foreheads, a dark reddish-brown color on the sides of the bird's neck, a grayish bill, gray and dark brown streaks on the back, rump and tail, blackish-brown breast and belly, pale yellow eyes, and black legs and feet.

Now fairly common in the U.S., brown pelicans nearly disappeared from North America in the 1960s and 1970s because of the effects of DDT and other persistent pesticides. According to birdadvisor.com, brown pelicans incubate their eggs by covering them with their webbed feet. The pesticides caused thinning eggshells that cracked under the weight of their parents' feet.

The brown pelican's long beak measures approximately 9 inches with a hooked tip. The huge skin pouch suspended from the lower half of the hooked bill is used as a dip net and can hold a gallon of water and fish. Pelicans squeeze the water out from the corners of their pouch before they swallow their catch. They don't carry fish in the pouch, but in the gullet or esophagus. The pouch also serves as a cooling mechanism in hot weather, and as a feeding trough for young pelicans.

Another favorite moment for me is after brown pelicans land in the water and begin taking a bath. They duck their heads down and vigorously flap their wings, splashing water in all directions. When they dry off, they use glands to oil their feathers.

And FYI, about that well-known limerick supposedly by Odgen Nash, my online search says author C. M. Marshton is the leading candidate for creator of this poem in 1913:

A gorgeous bird is the pelican, Whose beak will hold more than his bellican. He can put in his beak Food enough for a week. But I'm d— if I see how in hellecan.

Advice for photographing birds in the wild: Try to photograph flying birds with the sun at your back and a fast shutter speed to freeze the action (in this case, 1/4000th of a second with Shutter Priority for exposure and burst mode). Practice panning to track the bird's flight and anticipate peak action like diving into the water or taking flight.

Get Out pelicans Brown pelican