Ford vs. Ferrari is a well-engineered ride 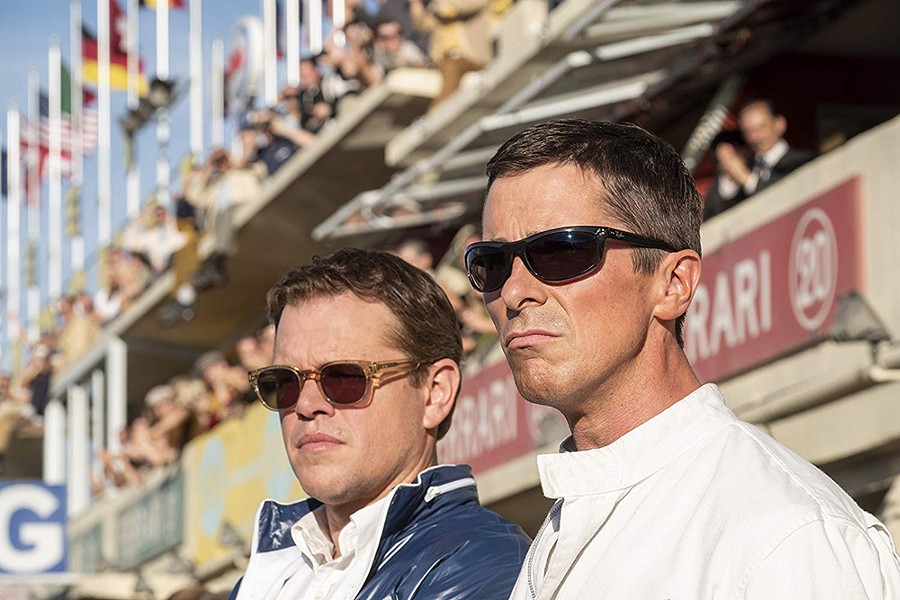 Ford vs. Ferrari Every time Devin Nunes opens his mouth.

FORD VS. FERRARI. Motorsport in the middle 1960s stood on the precipice of change: still hewing to its daredevil origins, it remained delicate and brutal, homebuilt and homicidal. It was a time when a little upstart car company off the beach of Los Angeles, helmed by a former world-class racing driver turned failed chicken farmer with a shit-eating grin, could go out and win a world championship. This was before the wholesale corporatization of the sport (whether we agree to refer to it as sport is incidental), before HANS devices and fire suppression, before the technology of tires had advanced enough to adequately and safely contend with the speed and heat to which they were subjected. It was a raw, rugged and frequently balletic form of competition, often as likely to deal out death as victory. And for many, an endurance race held annually on a ludicrous circuit in the French countryside, the 24 hours of Le Mans, represented the pinnacle of achievement, the ultimate intersection of engineering, perseverance, skill and luck.

Le Mans 1966 became, even before the benefit of hindsight, a sort of high water mark for the bug-eyed fever auto-racing induces in its acolytes. And it sits squarely at the center of director James Mangold's Ford v Ferrari.

In the early '60s, an ambitious young executive at the Ford Motor Co. named Lee Iacocca (Jon Bernthal) scrambles to halt slumping sales under the jowly glare of Henry Ford II (Tracy Letts), nicknamed the Deuce. Iacocca is onto something, even if his peers cannot see it: He recognizes that the generation who will become the Baby Boomers are something unprecedented. Teenagers with agency, earning power and a love for cars, they are also coming of age in an era of increasingly ubiquitous world culture. They want it fast and sexy, and they want it right now; drawn to the statuesque sensuality of European design, they eschew the plain utilitarianism of Mom and Dad's grocery-getter. Iacocca's pitch: Ford should go racing on the world stage by purchasing Scuderia Ferrari, the little Italian car company that has won Le Mans four of the last five years and is, as a result, now bankrupt.

It's not a bad idea but it ignores the guile and pride of the old man who put his name on the building, Enzo Ferrari (Remo Girone). The attempt goes sideways in rather spectacular fashion but it manages to get the Deuce's back up; he wants to go to war.

Enter the aforementioned shit-eating grinner, Carroll Shelby (Matt Damon), recently retired from race driving due to a faulty heart valve. He got the bright idea to import little aluminum bodied sports car from England, stuff them with Ford V8s and take them racing. The Shelby Cobra, constructed in a funky little building in Santa Fe Springs and then in Venice by a ragtag group of savants and journeymen, presaged the muscle car movement, captured the passion of European design, won a great number of races and became an international icon. Despite Shelby's innate hucksterism and hustle, though, they didn't sell particularly well. So when Iacocca pays a visit, waving a blank FoMoCo check under his nose, it gets Shelby's attention.

Shelby, in turn, petitions the aid of Ken Miles (Christian Bale), a British former tank driver, superlative amateur race car pilot and recently failed repair shop owner. Miles is famously cantankerous, single-minded to a fault and, to Shelby's mind, a vital asset in developing a race car for Mr. Ford that will give him a chance at beating Ferrari at Le Mans.

This all sets the stage for a multi-year process of research and development, corporate infighting — Leo Beebe (Josh Lucas) comes off as the undisputed villain of the piece — success and failure in equal measure, with Shelby betting big on Miles as the shoe to beat.

It may be apparent that, while I don't pretend to be an expert, I am closer to this material than some. So I was predisposed to very much enjoy Ford v Ferrari, my enjoyment of Mangold's recent work almost notwithstanding, although I would venture that Logan (2017) and Wolverine (2013) are both more compelling than anything Avengers.

There is more to the pleasures of this movie than is probably worth dissecting here but in brief: The attention to detail, both automotive and otherwise, is impeccable; the aesthetic, controlled and deceptively smooth, totally appropriate; the performances, including Bale appearing to have fun onscreen for the first time in a decade or more and Tracy Letts disappearing into character, spot-on. From my nerdy perspective, though, the racing sequences are the thing. It is famously difficult to capture speed on film (books could be written about the attempts) but Mangold, director of photography Phedon Papamichael and their technical team make it seem effortless. They put cameras in impossible places, moving in and around cars on track in a totally innovative but non-invasive way; it's a marvel of ingenuity and design, just like the exquisite automobiles upon which it is focused. PG13. 152M. BROADWAY, FORTUNA, MILL CREEK.

21 BRIDGES. Chadwick Boseman stars as a cop on a manhunt who discovers a police conspiracy in a totally locked down Manhattan. R. 99M. BROADWAY, MILL CREEK.

IT'S A BEAUTIFUL DAY IN THE NEIGHBORHOOD. Tom Hanks dons the cardigan of Mr. Rogers in this biopic that's probably wholesome enough to give you strong bones and healthy teeth. PG. 108. BROADWAY, FORTUNA, MILL CREEK.

FROZEN 2. Elsa and Anna return for more snowbound sisterly adventure and to put that song back in your head. PG. 104M. BROADWAY, FORTUNA, MILL CREEK, MINOR.

PARASITE. Director Bon Joon Ho's drama about a broke family scamming their way into the lives of a rich family with some success until things get weird. (In Korean with subtitles.) R. 132M. BROADWAY.

FANTASTIC FUNGI. Mycological documentary with time-lapse footage of mushrooms and a dive into their history. NR. 81M. MINIPLEX.

GIFT. Documentary about the creative process of giving and gift-based cultures from a Roman museum to Burning Man. NR. 90M. MINIPLEX.

THE GOOD LIAR. Ian McKellan stars as a confidence man who falls for his wealthy mark (Helen Mirren) and everything goes to hell. R. 149M. BROADWAY, MILL CREEK.

JOKER. The supervillain gets the sympathetic (but not vindicating) origin story treatment with an excellent and creepy Joaquin Phoenix amid a grimy, brutal Gotham. With Robert DeNiro calling up King of Comedy vibes. R. 121M. BROADWAY.

MALEFICENT: MISTRESS OF EVIL. Angelina Jolie is back in the horns to block Aurora's (Elle Fanning) wedding and throw down with Michelle Pfeiffer. With a winged Chiwetel Ejiofor. PG. 119M. BROADWAY.

MIDWAY. Ed Skrein and Patrick Wilson as U.S. Navy pilots in the key battle over the Pacific during World War II. FORTUNA.