And what's living in the holdfast 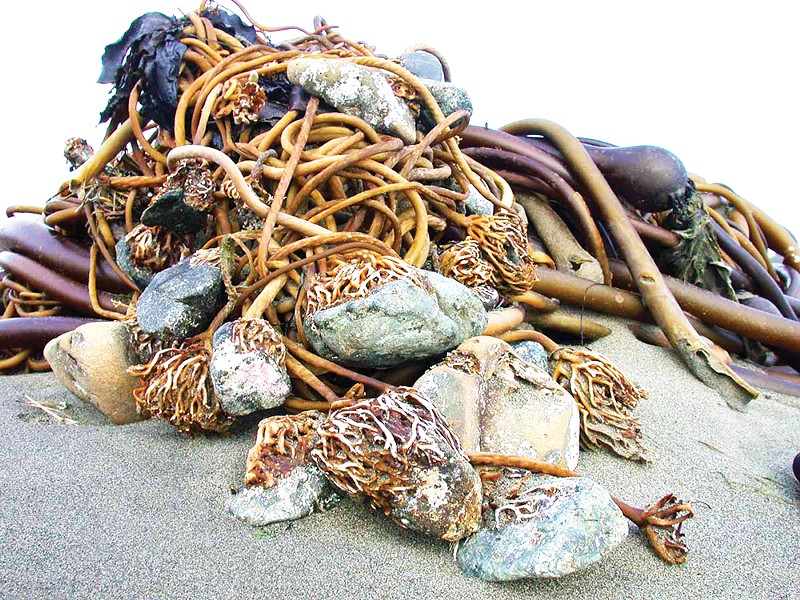 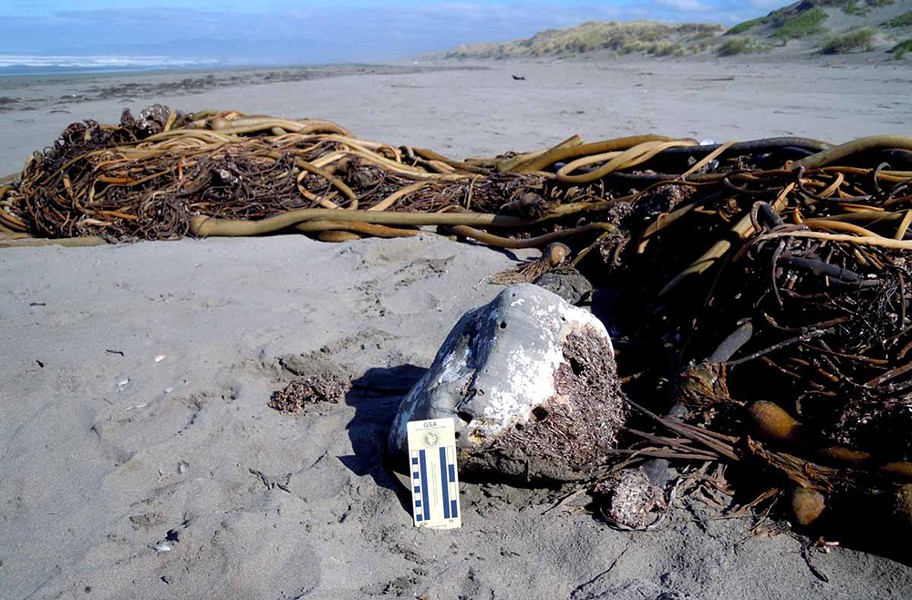 Photo by Mike Kelly A brittle star in a bull kelp holdfast.

Photo by Mike Kelly A gooseneck barnacle on a bull kelp holdfast.

Photo by Mike Kelly An isopod from a bull kelp holdfast.

Photo by Mike Kelly Larval fish eggs from a holdfast.

Photo by Mike Kelly Nudibranch Hermissenda from within a holdfast.

Photo by Mike Kelly A post-larval red rock crab in a holdfast. 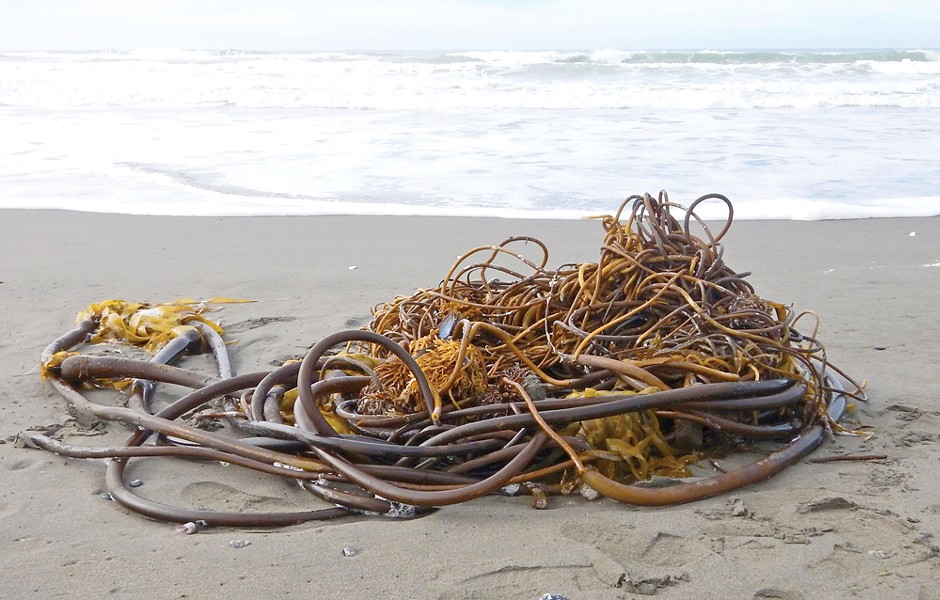 Photo by Mike Kelly A typical mass of washed up bull kelp.

Climate change-related shitstorms are not funny. So if you came here for humor this week, you'll have better chances reading the crossword puzzle.

I know someone will say, "But there's no actual shit falling from the sky, so global warming is a hoax." That's fine, but I'll even let doubters choose the type of shit and how deep they think the flood needs to get in order to convince them. Bat guano up to their ankles? Knee-deep donkey dung? A deluge of doggie doo-doo buoying their boobs?

The shitstorm I'm referring to is the dramatic loss of bull kelp (Nereocystis luetkeana) along the California coast. In an issue of the North Coast Journal last month, you may have read the facts about the shit cascade of warm ocean conditions, seastar wasting disease, loss of a top predator, the explosion of sea urchins and the starvation of kelp-eating abalone, as well as efforts to restore bull kelp. If you missed it, that story is online ("Tools in the Toolbox," April 15).

But my job here is to celebrate the washing up of bull kelp on our local beaches. And I can tell you anecdotally that there isn't as much washing up now as in past years.

Before bull kelp washes up, it exists attached to the bottom by a structure called a holdfast. The holdfast is a tangle of rubbery threads that usually attaches to rock. However, I once found an unfortunate abalone that had been dragged up the beach by a bull kelp, on which it feeds, attached to its shell. Picture a human dragged backward out to sea by a pizza.

Sometimes a large tangle of bull kelp is buoyant enough to lift large cobbles and deposit them high on the beach when the whole mass washes up. Rocks going uphill naturally aren't what we'd expect. So I always wonder whether there are any confused geologists out there examining ancient beach deposits with erratic clusters of cobble.

If you find a fresh bull kelp with its holdfast still attached, check for some of the many animals that hide in the nooks and crannies. We have found sea stars, brittle stars, lots of small and larval crabs, shrimp, clusters of fish eggs, barnacles, sea slugs, hydroids — the list goes on. We've been able to salvage some of these animals for marine biology classes, which was satisfying since they were doomed to die slowly otherwise.

While the holdfasts hold the kelp down, a gas-filled bulb called a pneumatocyst holds it up. Between the float and the holdfast is a long, skinny "trunk" called a stipe. Most popular accounts will tell you that bull kelp is named for the stipe's resemblance to a bull whip. But I say it's because the pneumatocyst resembles a bull's something-else.

A tiny bull kelp starts life attached to the bottom and grows toward the surface — at something like a foot a day in the right conditions. When it reaches the surface, its fronds spread out like the canopy of a forest. The so-called kelp forest functions ecologically as an actual forest and supports living communities. If you have the luck to dive in a kelp forest, try picturing the fish above you as birds flying around.

So far it seems that the loss of kelp forests has been worse to the south of Humboldt County. But the loss of bull kelp forests may end up being a real shitstorm here too. Hopefully it will be no worse than a bird turd on my suede loafers. However, if ocean conditions keep warming and kelp restoration efforts fail, we may end up with the kind of shitstorm that leaves us with human feces cresting our lower lips. Would that be convincing enough?