My experience using fire to fight fire as land management 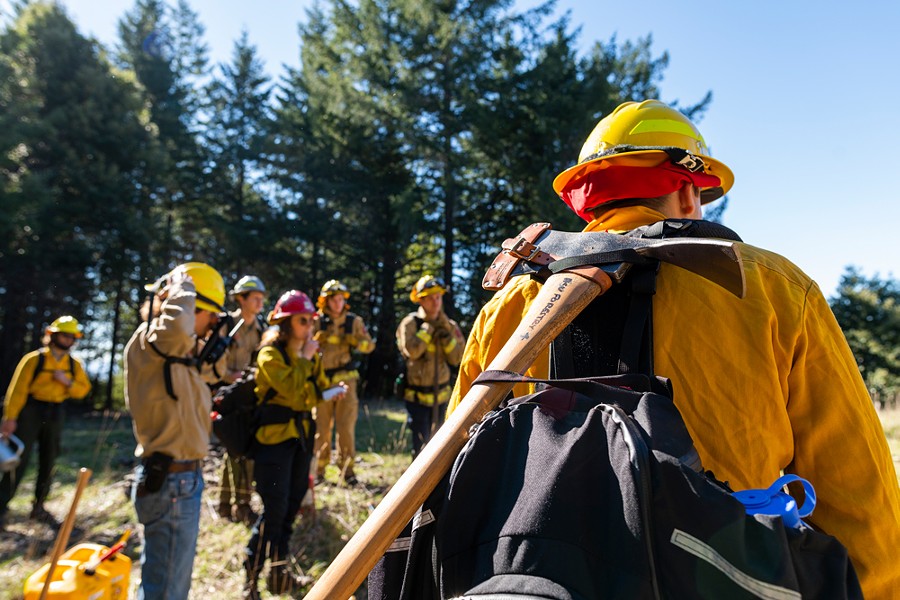 Photo courtesy of Cal Poly Humboldt Flames take off under the canopy.

Photo courtesy of Cal Poly Humboldt Prescribed fire can reduce brush, or "fuel load," to mitigate the impact of wildfires.

The scariest thing about prescribed burns — to me — is not the flames. It's the people. This is what I explained to my friends when they asked about our plans for the 109-acre Buckeye Ridge Burn, a project funded by a CalFire Climate Change Investment grant awarded to the Save the Redwoods League. Save the Redwoods also contracted with the Mattole Restoration Council (full disclosure: I serve on its board) to prep and monitor the burn. Members of the Prescribed Burn Association, several local volunteer fire departments, firefighters from CalFire, students from Cal Poly Humboldt and a handful of friends and family all planned to show up on an unseasonably sunny Saturday in February to light my family ranch on fire. Again, fire was not the problem — we'd hosted a prescribed burn before and it was pretty anti-climactic. But that's a lot of people to feed and keep safe.

Until you've actually spent time in the rural regions of Humboldt County, you don't understand how remote, how cut off, it can be. My childhood home is 30 miles from the highway, 8 miles from the Honeydew Store, 4 miles from the nearest neighbor. Buckeye Ridge is farther still, accessible only by four-wheel drive. I spent the week before the burn buying groceries for the crew and fretting about the danger of someone blowing a tire or going off the road, about how it doesn't matter how often you explain it, many people just don't get that there is almost zero cell service out on the ranch and, no, Google Maps will not help you get here.

The history of fire in this region is also a history of people. The original stewards of this land, the Sinkyone Tribe, burned meadowlands rotationally to enhance game habitat and also to improve oak woodlands for the acorn harvest. This practice was lost when the Sinkyone and Mattole people were attacked, murdered and forced from the Mattole Valley in the mid-1850s, although we are fortunate to be witnessing a revitalization of traditional burning practices today, led by groups such as the Cultural Fire Management Council.

The settlers who claimed land taken from the Sinkyone and Mattole people did clear it by burning. According to my dad, widespread burns were held back by a desire to preserve wood fencing and timberlands, but pastureland was often cleared and renewed with fire. In the first half of his lifetime, sheep were the region's biggest industry, and ranchers would often organize burn parties, first "cutting a line" with heavy equipment then lighting the pastures on fire, "a drip torch in one hand and a case of beer in the other." It was common to notify CalFire about these burns, but there wasn't the same level of regulation we see today. Those burns enhanced the grazing land, reduced fuel for wildfires and cut back on brush.

In the second half of my father's lifetime, the dominant industry in the Mattole Valley became cannabis. Much of the surrounding timberland was subdivided and — as my dad puts it — brush cover was a good thing for guerrilla grows where you might want your plants camouflaged from CAMP helicopters among young fir or whitethorn. The Bureau of Land Management also bought up many of the former large ranches and did not include fire as part of their management plans. As with much of the West, our little corner of the world became more densely populated. And with more people, less sheep and less good fire, came the threat of more, well, bad fire.

I can only remember one major wildfire in the Mattole, in the early 1990s. A series of lightning strikes hit King's Peak, the Upper North Fork and Gilham Butte. As dad puts it, CalFire was "stretched pretty thin," so he and other members of the Honeydew Volunteer Fire Co. were instrumental in cutting line and containing the fires started by the strikes. As a child, my strongest memories of the incident are the dense smoke that kept us inside, and my mother packing up our Chevy Blazer in case we needed to evacuate. My little brother and I were each given a cardboard box and told to fill it with our favorite toys. We have been spookily lucky in the decades since, I often think, both in the Mattole and in Humboldt County. (We have also been blessed with a badass crew of volunteer firefighters and the presence of the CalFire station in Honeydew.) I can't help but think, however, that it's really a question of when, not if, we will have a conflagration like the Camp or Carr fires.

Fighting fire with fire was the primary aim of the Buckeye Ridge Burn. Save the Redwoods League, again using funding from CalFire, sponsored a shaded fuel break across Gilham Butte and Buckeye Ridge. A stalwart fuels crew employed by the MRC has been at a spike camp on our ranch almost continuously over the past two years, thinning trees and clearing brush to create a line of defense. The fact that the crew worked through a pandemic, freezing cold, blazing heat and our tricky, sometimes slippery roads, eased my anxiety about inviting folks out for the burn. True, they were and are extraordinary humans, but maybe extraordinary humans aren't as rare as we might think, especially in the Mattole. And so it was that on Feb. 17, a convoy of pick-ups and fire trucks made it (safely) to the back end of the ranch, where Phil Dye, the burn boss, had everyone circle up for a safety talk.

Dye, who runs Prometheus Fire Consulting, eliminated most of my logistical concerns. He taped a map of the burn to the side of his truck and reviewed who would be stationed where. He discussed basic safety, including fuel and hydration needs, communication and evacuation plans for medical emergencies. Each team was issued a portable CB radio. Dye talked briefly about our objectives — to consume dead and downed trees that would exacerbate a wildfire, to reinforce the shaded fuel break and to try and knock out some of those aggressive baby Douglas firs that have been creeping into our meadows. He spoke about fire behavior and the unusually dry winter we'd had, one that made conditions perfect for a prescribed burn that would normally be done in the late fall. The Buckeye Ridge burn was one of three in Southern Humboldt that week alone, as conditions made for what the Prescribed Burn Association called a "perfect burn window."

"It's strange to be doing a burn in February," Dye acknowledged. "But let's make lemonade from lemons."

And so we convoyed again, up to the Duncan Pre-emption, an open space of meadowland just below Gilham Butte, where the MRC crew had camped most of the summer. A team headed up toward the butte with a fire truck and drip torches, and others fanned out along the fireline. Plumes of smoke soon began to rise above the trees. Dad, my brother and my cousin tried to set off piles of branches and slash next to the timberline. My friend and I walked to where Cal Poly students were working with members of the Prescribed Burn Association to light the grass just above the timberline with drip torches. She remarked that it felt strange to "walk toward a fire," and I agreed, but it didn't feel dangerous. It felt good, natural, even safe.

The folks holding drip torches began with small passes at the top of the ridge until there was no fuel behind them to catch fire, then became bolder, burning wider swathes of ground as they worked their way down the slope. Each team checked in with the burn boss and one another via CB radio to make sure no one was below the fire line or otherwise unsafe.

And the fire was not out of control, like the scary ones we see on TV. It was clean burning and quick, the smoke a healthy organic gray and white. When it caught the undergrowth in the deep timber it found a voice, a roaring hiss not dissimilar to the murmur of running water. My friend and I packed the truck and took it back down to the other side of the ridge to see the burn from a different perspective. From there, we noted the tall firs and oak were blanketed with smoke. Occasionally the fire caught the pitchy underside of a large fir and scurried up it, rendering the tree momentarily a torch. The day became unseasonably hot, and we stripped down to tanktops, which felt weird for February.

Two ridges over, a herd of cows grazed placidly, unaware or uncaring of the flames. By 5 p.m. a strong wind picked up and began buffeting the ridge and we layered up again. Crew members began returning to base in pickups and water tenders at around 5 p.m. The fire was still burning but well within control, and a skeleton crew of MRC staff was ready to monitor it over the night. Everyone circled up again, stamping their feet and pulling their jackets tight against the wind. The snack table was razed by hungry firefighters and college students.

Dye gave a debrief, congratulating everyone on a job well done. The plan, and the deviations from that plan, were discussed.

"I don't like to micromanage," Dye said. "I like to give crews on the ground an opportunity to improvise. That said, there's going to be a day when you're on a burn and things are going to get crazy and I want to know that the people I'm with are accountable."

Among the challenges of the day were problems with the CB radios, some of which didn't work properly on the fireline. We noted that the plastic culverts in place at some of the fire roads could have melted if the fire had crossed them or created a backdraft. But for the most part it was a successful burn, a much more dramatic burn than our previous event, where a patch of meadowland gently smoldered as about 100 firefighters watched, waiting for their chance to jump in and keep it from getting out of control. We thanked the crew and they thanked us, and everyone convoyed safely back out across the ridge to where their cell phones worked.

The next day, dad and I came back to examine the fireline, noting the fingers of scorched earth that extended down to the road. The flames would smolder in some places for days, and the smoke would sit on Buckeye Ridge like a big wooly blanket. Most of those small firs were scorched but not wiped out, which was disappointing. The MRC crew reported they heard a few larger old trees fall over in the night with cracks and groans.

Altogether, dad estimates about a quarter of the site actually burned, which is not a bad success rate. Most importantly for me, my fears about death and disaster were allayed due to good management. Everyone got fed and got home safe. This summer, we'll get to go back and see how the grasslands have reacted, if there's more feed beneath the trees for the cattle. And fingers crossed, if the worst thing possible happens and we're struck by lightning or some man-made wildfire, the good fire will keep the bad fire from getting out of control. We're already talking about where we want to burn next.

Linda Stansberry (she/her) is a staff writer at the Journal. Reach her at linda@northcoastjournal.com and follow her on Twitter @LCStansberry.