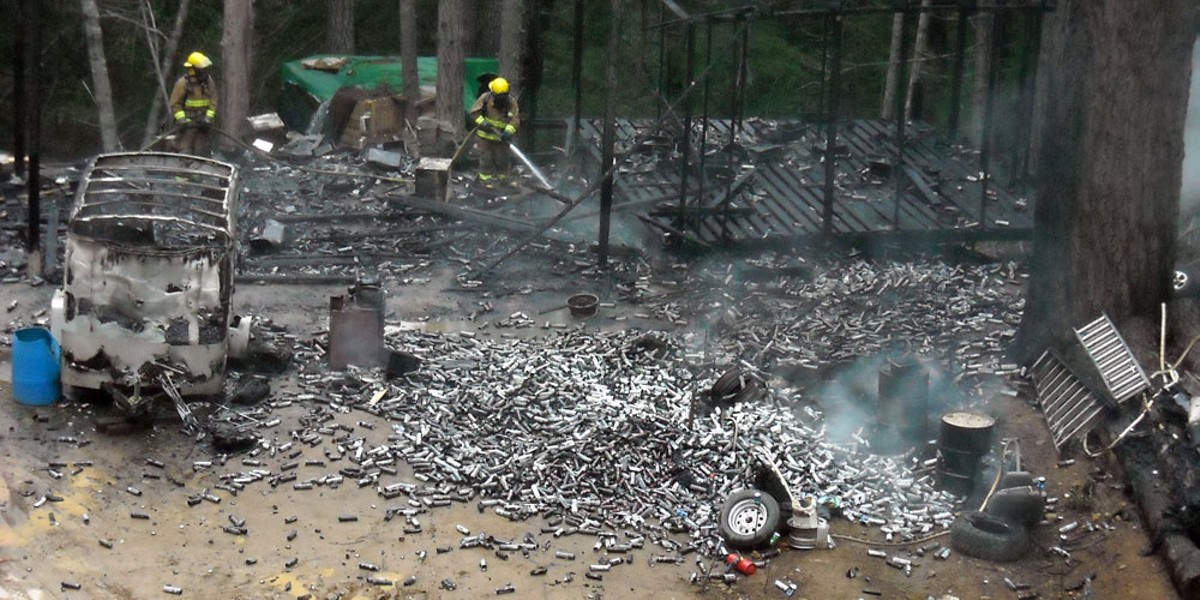 Humboldt County Sheriff's Office Does a bear hash in the woods? No, no it doesn't.

Whether it be oils, shatter, wax or honeycomb, the marijuana concentrates market is exploding. And in the eyes of some, that's a very literal problem.

Potent concentrates now make up about half of all legal recreational marijuana sales in Colorado, and some industry insiders predict the shatters, oils and hashes of the weed world will soon dominate the market. The problem lurking beneath this market trend is that the most popular method of making many of these products — butane extraction — is wasteful, dangerous and carries a host of unstudied health risks.

Cannabis concentrates are nothing new and have been used in some form for thousands of years. But the traditional methods of separating marijuana's psychoactive properties — THC, cannabinoids, terpenes and terpenoids — have given way to new methods of extraction that can deliver a more potent product.

The two most widely used extraction methods involve using CO2 or butane to strip compounds from the cannabis plant in order to isolate the stuff that will get you high. The CO2 extraction process involves expensive botanical machinery that uses pressure and the gas to pull a potent amber oil from marijuana. That oil is then put in the small plastic cartridges used in portable vaporizer pens, which have become some of the industry's best sellers. Largely, CO2 extraction is a safe process that results in a safe product.

Butane extraction is something entirely different. The go-to method for making the shatter, wax and honeycomb that now permeate the market, butane extraction involves taking a long plastic or glass tube, filling it with marijuana plant matter and then pushing butane through it. The butane strips the plant matter of THC, leaving behind a thick golden liquid. That thick liquid still contains butane, however, which must be evaporated off, usually in a two-step process involving hot water and a heating pad.

The problem is that butane, once purged from its container, becomes a fugitive gas that's heavier than air. In a poorly ventilated space, it pools at the floor and builds up until it escapes or hits an ignition source, such as a pilot light, and explodes.

To make shatter — a hard concentrate with an amber, stained-glass-like appearance — folks add the additional step of "winterizing" or "dewaxing" to remove marijuana plant wax from the butane extract. This is usually done by putting the extract into a canning jar with acetone or isopropyl alcohol, and placing the jar into a freezer for 24 to 48 hours. This adds another layer of danger, as the gasses from any remaining butane in the extract and the added solvents can pool and ignite when the freezer's fan clicks on.

If you're wondering about the impact on your lungs from taking some clean, green, sun-grown marijuana, dousing it with butane and other chemicals, and then smoking what's left over, you're not alone. The health risks associated with butane hash oil (BHO) products are potentially legion, if totally unstudied. These include the risks of concentrating pesticides used to grow the marijuana; of smoking butane that isn't properly purged from the abstract; of the presence of lubricating chemicals and other compounds — things like benzene, hexane and neopentane — in the finished product; and even of concentrating the waxy substance that exists on most plants and vaporizing it directly into your lungs.

But pushing aside the potential health risks associated with the finished product, there's plenty about the butane extraction process that's worrisome. First off, butane is sold in relatively small canisters — generally ranging from 4 ounces up to 12 ounces in size. The BHO extraction industry goes through tens of thousands of these things, as was evidenced when when Southern Humboldt cleanup effort in January of last year pulled 800 pounds of empty canisters from a canyon near Carter Creek.

But the more immediate worry is the aforementioned explosions associated with the extraction process. Because of BHO's soaring popularity and marijuana's still quasi-legal-yet-largely-unregulated status in California, scores of people have taken to manufacturing BHO in their residences, often with little training beyond an Internet tutorial. This can have tragic consequences.

Humboldt Bay Fire has responded to four confirmed butane hash lab explosions — with another suspected — since November, including a couple that sent people to out-of-area hospitals for burn treatment and another with an explosion so fierce that it "moved the roof off the walls." Overall, butane hash lab explosions have accounted for 19 percent of the department's structure fire calls since Nov. 1. In February, the department announced that these fires — which often come with secondary explosions due to large amounts of butane stored on site — are so dangerous it would no longer send firefighters into structures to fight them unless they believed someone to be trapped inside.

Fire Chief Bill Gillespie is now working with the Eureka City Attorney's Office and County Counsel to craft an ordinance that would limit the sale of butane within city limits and potentially within the entire county. The idea, Gillespie said, is to make sure butane is only sold in very small quantities, making it difficult for someone to find enough of the stuff to run an extraction operation.

The bottom line, Gillespie said, is there is no place within his jurisdiction that has been approved as safe for butane extraction. Such a facility, he said, would need fire suppression systems, sprinkler systems, commercial ventilation systems and wiring up to codes that could sustain a potential explosion.

"If you're doing this, you've got to be really careful," Gillespie said. "It's such a tremendous blast and fire hazard to be in an enclosed area that's not designed for it."

Frenchy Cannoli, a renowned "cannabis resin consultant" from Mendocino who specializes in making hash, said there's an extract revolution going on right now in the cannabis industry. Within that, there are those who are refining processes of sieving off the resin glands and THC from cannabis to make hash that have been around for tens of thousands of years. Then there are also those constantly questing for easier methods and more potent products. That's where BHO comes in.

Editor's Note: This story was updated from a previous version to include additional data about Humboldt Bay Fire's responses to butane hash lab explosions.