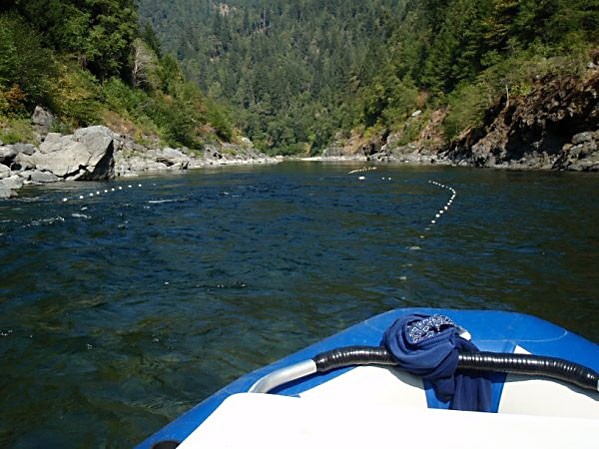 As the fall salmon run on the Klamath and Trinity rivers draws to a close, a small group of sport fishermen and guides has been casting allegations into the teeming waters of the Internet, claiming that gill nets employed by the Yurok and Hoopa Valley tribes are systematically decimating the fragile fish population by ensnaring all but a measly, undersized few. They say the nets, which snag fish by the gills as they attempt to escape, are jeopardizing not only their livelihoods but the health of fisheries up and down the coast for years to come.

Tribe members, meanwhile, dismiss the charges as baseless, saying these commercial fishermen are ill-informed at best, and, at worst, dishonest and racially motivated.

Commercial fishing guide Mike Aughney has been leading the anti-gill net campaign from his own Web site, www.usafishing.com. For more than a month, Aughney has been lamenting the dearth of salmon on the lower Trinity, citing as evidence the experiences of commercial fishermen and guides like himself as well as low fish counts at the Willow Creek weir, a collection site monitored by state scientists.

"It's tough enough the salmon have to make it through one gauntlet on the Lower Klamath," Aughney wrote in reference to the Yurok gill nets, "but it's the second set of nets at the Hoopa reservation that are inflicting the biggest toll."

"We were aware that the Yurok tribal commercial season had been closed for over a week, and became concerned that the fish had been unlawfully harvested under current Yurok fishing regulations," he said. Investigators learned that a total of 20,000 pounds of salmon had been sold and distributed among the chain's 20 Bay Area locations. Aughney believed this was the smoking gun. However, the salmon turned out to be from the Hoopa Valley Tribe, which, unlike the Yurok, does not prohibit its members from the commercial sale of their state-sanctioned allotment of subsistence fish. (Such a ban used to exist, but the tribe repealed it in 1989.)

"That's the rub, the Catch-22," said NOAA Fisheries Special Agent Tim Broadman. "You have to have a regulation that's being violated." NOAA Fisheries has authority to prosecute tribes under the federal Lacey Act, which prohibits the sale of illegally acquired fish, but since the Hoopa Valley Tribe has no law against selling subsistence fish, the agency has no jurisdiction in this case. In fact, the transaction was not illegal.

Nevertheless, Aughney believes the current system, in which tribes regulate their own fisheries, allows for corruption and dishonesty. He claims tribes have been stringing gill nets across the entire width of the river, a violation of regulations in both tribes. "When [tribal police] have NOAA observers on board, all the illegal activity stops for a couple hours while the principal walks down the hall, so to speak," Aughney said by phone last week. "And as soon as he goes back in his office, it's wide-open recess again." He suggested switching to the type of sonar counting system used in numerous Alaska fisheries.

Broadman said sonar has been tried but was unsuccessful on the lower river due to its width and the prevalence of moss. And he commended the Yurok tribe for improving its accounting efforts. "When I first started here years ago, there wasn't any accounting for fish," he said. "They do a very good job compared with the past."

Both tribes defended the accuracy of their accounting methodology, in which pre-season harvesting estimates are compared with actual harvest numbers, based on sample data collected in interviews and inspections. "We know what we're doing, and we do it well," said Yurok Tribe member and policy analyst Troy Fletcher. "And the Yurok Tribe has never exceeded their quota. ... We sure would like to see the sport industry monitored to the high degree that the tribal fisheries are monitored."

The Hoopa Valley Tribe is catching more fish than in previous years. Mike Orcutt, the tribe's fisheries director, said the near-total closure of this year's commercial ocean fishing season increased both demand and market price for salmon, and the tribe has built new facilities and increased efforts to catch its full allotment of 6,180 fish. As of last week, he said, they'd caught just over 4,000 -- but not with bank-to-bank gill netting, which Orcutt insisted he had never seen in Hoopa territory.

"We have that right," Orcutt said of this year's catch, "and now we're exercising it."

That's the bottom line, agreed Chuck Tracy, salmon staff officer with the Pacific Fishery Management Council, a federal agency that regulates sport and commercial fishing on the West Coast. "Tribes regulate their own fisheries," he said. "They're sovereign, so they set their own rules."

Fletcher said complaints like Aughney's often boil down to racial tensions and attitudes about the tribal fisheries, a charge Aughney denied.

"It just so happens that only Indians have gill nets," he said. "I wish it was white people because then we could really go after them with both barrels and I wouldn't have to worry about being called a racist."

The actual numbers of naturally spawning salmon in the Klamath basin won't be known until the PFMC releases its full analysis in January or February. Then, new quotas and conservation objectives will be set and another fishing season will commence.