By Julie Cart and CalMatters 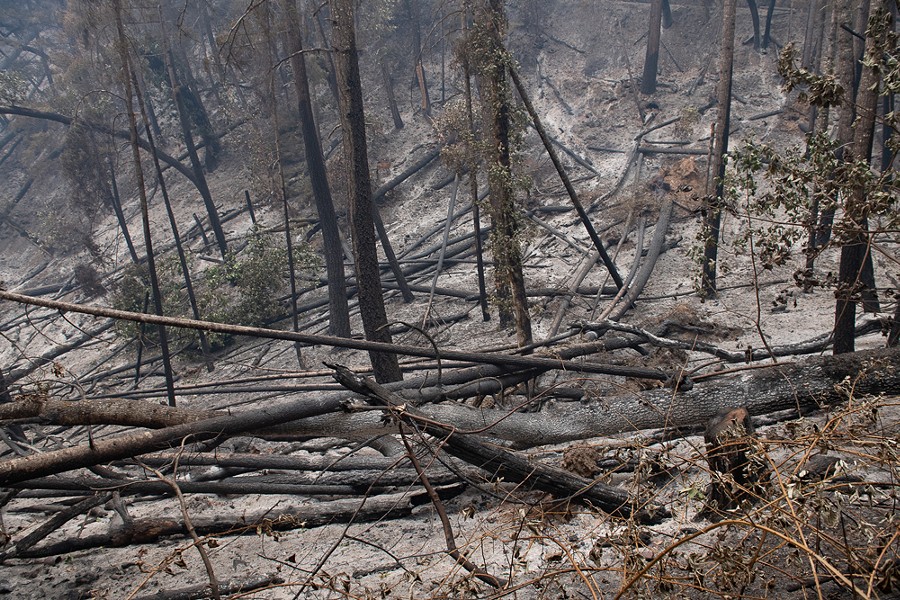 Mark McKenna Fire crews stage at the corner of Bigfoot Avenue and Hillcrest Way as they prepare to defend structures from the encroaching Six Rivers Lightning Complex Fire in Willow Creek.

Mark McKenna Smoke rises from the Six Rivers Lightning Complex Fire on a ridge as seen from Friday Ridge Road near Salyer.

As California emerges from its "peak" wildfire season, the state has managed to avoid its recent plague of catastrophic wildfires. So far in 2022, the fewest acres have burned since 2019.

State Emergency Services Director Mark Ghilarducci said California had "a bit of luck" with weather this summer. Although enduring yet another drought year, much of the state was spared the worst of the heat and dryness that can spark fires. And in some instances, timely rain came to the rescue.

CalFire officials also attribute some of the mild wildfire season to their emphasis on clearing away vegetation that fuels fires. CalFire Chief Joe Tyler said the $2.8 billion spent in the last two years on forest management made a difference, with the work "moderat(ing) fires approaching communities."

Mindful that wildfires can spark at any time in an environment driven by climate change, California officials have their fingers crossed after Gov. Gavin Newsom pronounced "the end of peak fire season" in mid-November. While California has entered an age of year-round fire seasons, the bulk of its fires occur from April through October.

Still, Newsom knows better than to tempt fate. So while reporting that the state had a relatively moderate fire season and praising fire managers and crews, he quickly added that anything can still happen.

"We are not here with a sign, 'Mission Accomplished,' in any way shape or form," Newsom said. "We will continue to maintain our vigilance."

Here's a look at some of the stories behind the numbers.

That's how many acres burned across the state so far this year. Almost a quarter of those tore through remote El Dorado and Placer counties during the Mosquito Fire in September and October.

For perspective, last year's acreage was about seven times larger — 2.5 million. And those years paled in comparison to record-breaking 2020, when more than 4.3 million acres were ablaze in California.

The state still threw everything at the wildfires it faced this year, hiring 1,350 additional personnel, deploying a new fleet of bespoke firefighting helicopters, and putting satellites, drones and artificial intelligence to work to attack each blaze.

Included in the 362,455 acres burned were the 41,596 acres charred in the Six Rivers Lightning Complex, a cluster of fires sparked by lightning strikes in eastern Humboldt and western Trinity counties Aug. 5. While the blazes prompted mandatory evacuations and threatened numerous communities, a prompt and robust response from fire agencies resulted in not a single structure being lost.

Statistics about dramatically fewer structures destroyed by wildfires offer cold comfort when it's your home that burned down. Still, there was much less damage done compared to recent years: 772 California structures were destroyed by fire this year, while 104 were damaged.

The McKinney Fire in July leveled 185 structures and the Oak Fire in Mariposa County destroyed 182, also in July.

Last year, a challenging fire season, was much worse: 3,560 buildings were destroyed — almost five times more than this year— with another 286 damaged. And during the 2020 season, the benchmark worst in nearly every statistical category, 11,116 buildings were lost.

The 2018 Camp Fire in the Butte County town of Paradise remains the most destructive fire in California history, wiping out nearly 19,000 structures — an entire community.

The ultimate cost was great, even in a quiet fire year. 2022 fires claimed the lives of nine Californians.

Four people died in August in the McKinney Fire in rural Siskiyou County, a sprawling blaze that also injured 12 firefighters. Two people were found dead in a car in their driveway. Another victim was a woman in her 70s who worked as a fire lookout for nearly five decades. She was killed in her home.

For comparison, three people died during the 2021 fire season, 33 in 2020 and three in 2019. The Camp Fire, which killed 85 people, retains the awful distinction as the state's deadliest fire.

It's a small victory, but fire officials will take it. Some 7,490 fires were sparked in California in 2022, which is 256 fewer than the five-year average of 7,746. In the fire world, even modest gains (about 3 percent below average) are welcome.

Tree removal projects — and burn scars from previous wildfires — can often slow or stop the spread of new fires. That simple calculus of creating a less-combustible landscape should equate to fewer and smaller fires, even with the dozens of variables that go into sparking wildfires.

California has a goal, in conjunction with the federal government — which owns the majority of the state's forested land — to "treat" a million acres annually by 2025. That entails setting and monitoring low-intensity small fires, building and extending fuel breaks and clearing rights-of-way.

But it's painstaking and slow: In the 2021-22 fiscal year, the state conducted nearly 600 fuels-reduction projects across 101,000 acres. An additional 21,000 acres have been cleared since July.

The state's largest wildfire of the year, the Mosquito Fire, which burned 76,788 acres in national forests, turned out to be puny by recent standards, especially when compared to 2020's million-acre giga fires and last year's 963,000-acre Dixie Fire.

Size isn't everything. Although not huge, the Mosquito Fire, which ignited in early September, was stubborn in the extreme, abetted by its location in steep canyons where fighting the flames was difficult. The fire quadrupled in size in one day. It took almost three months for firefighters to control it.

The scenario of that fire burning in a dense and dry landscape was sobering enough to prompt evacuations and weeks of defensive actions including closing parts of Tahoe and El Dorado national forests at peak camping season.

A sustained deluge of rain in October was credited with finally helping to suppress the blaze.

Along with the Mosquito Fire, two other wildfires were also, in part, extinguished by an increasingly rare commodity in California: rain.

Firefighters in the Rockies have an axiom: Snow puts out fires. California's analogue occurred this summer when unexpected rainstorms doused two particularly nasty fires: the Fairview Fire in Riverside County and the deadly McKinney Fire in Siskiyou County.

Moisture from Tropical Storm Kay bailed out the Fairview Fire in September, and thunderstorms dumped three inches of rain on the McKinney Fire in August to douse some flames. But the storm also set off mud and debris flows, including one that killed thousands of fish in the Klamath River.

It's not just precipitation that influences the severity of the fire season. It's also wind.

As wildfires in the northern part of the state were tamped down at the end of summer, attention turned to the south, where fires often are triggered by dry Santa Ana winds. Perhaps to remind everyone who's in charge, winds gusted through Southern California over the Thanksgiving weekend, setting off red flag alerts for brush fires. But no large blazes erupted.

If history is any guide, the 12th month of the year can't be counted on to be quiet.

In 2017 Southern California exploded under strong Santa Ana conditions, sparking 29 wildfires, including the Thomas Fire, which burned 281,893 acres in Santa Barbara and Ventura Counties, making it at the time the largest fire in California history.

The month-long barrage started in December, ran across 440 square miles and destroyed more than 1,000 structures. It burned into January.

In 2020 more than a half-dozen wildfires started in December, a month that is reliably cool and moist — or sometimes hot and dry.

In other words, to quote the governor, "We are not out of the woods yet."