The late Mr. Mac is in full effect in Soul Men. Plus: Katrina, behind the scenes. 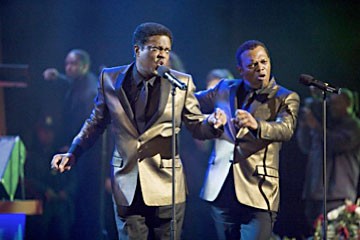 Opening Friday, Nov. 14 is Quantum of Solace, the 22nd James Bond film and the second to star Daniel Craig in the title role. I was a big fan of 2006's Casino Royale, which brought a fresh perspective to the series, not to mention the best "Bond girl" ever in Eva Green. At least Bond is out for revenge for her untimely death while battling Dominic Greene (Mathieu Amalric), who intends to control the water supply in Bolivia. Say what? Olga Kurylenko attempts to fill Green's, uh, shoes. Rated PG-13 for intense sequences of violence and action, and some sexual content. 106m. At the Broadway, Fortuna, Mill Creek and Minor.

Check out a midnight sneak peak of the teen vampire romance, Twilight, on November 20. The film is based on Stephenie Meyers' novels and features the traditional suave vampire type, played by Robert Pattinson. The vamp finds his soul mate in a young woman, but then must ultimately battle to resist his urge to devour her. Rated PG-13 for some violence and a scene of sensuality. 120m. At Fortuna.

SOUL MEN: Even had Bernie Mac not died following the shooting of Soul Men, it would be hard not to see this comedy as a tribute to his particular talents. His extended comic riffs on the f-word, for example, and his generally raucous approach to humor are plainly on display in the film, with Samuel L. Jackson generally taking the position of the comic straight man.

The plot is unoriginal. Two former backup singers for Marcus Hooks (John Legend), Louis Hinds (Jackson) and Floyd Henderson (Mac), were forced to go it alone when Hooks decided to strike out on his own. But a dispute involving Louis' wife ends their collaboration on a very bitter note and, we discover, they haven't spoken to each other for 20 years.

The film quickly establishes this background and then moves into its main storyline, precipitated by the death of Hooks. When Floyd receives a phone call inviting him and his former singing partner to perform at a tribute concert for Hooks to be held at the famous Apollo Theatre in Harlem, he sets out to persuade Louis to forget the past and sing together again.

As the two now live in Los Angeles, the film becomes a long road trip with their concert performance the payoff. While the concluding scene is both affecting and effective, I didn't care for the often tedious story that preceded it. Since Jackson's character is the one offended against, he gets to be irritable for much of the film while Mac gets to have fun.

The road trip involves some very silly gunplay and some painful performances at various dives along the way. To be fair, the two are meant to be very rusty, as they haven't sung together for a long time and the signature part of their act was their dance moves, maneuvers their aged bodies presumably can't handle as well (although a hip problem magically disappears by the final act).

Relieving Floyd and Louis from carrying the plot by themselves, they are joined by Floyd's daughter (we are led to believe) Cleo (Sharon Leal), the result of his affair with Louis' ex. Before Cleo becomes an instant lead singer for the duo, they have to pry her away from a standard issue abusive thug (Affion Crockett). They also spend a night in jail, and they are improbably joined by a nerdy guy who wants to be their manager.

All of this comes together in the final scene, where Jackson, Mac and Leal sing together, a scene made more memorable by a cameo of Isaac Hayes playing himself. Hayes died a day after Bernie Mac. The music is mostly a joy, but I wish the film itself had been better. You can see more of Mac in outtakes shown during the end credits. Rated R for pervasive language, and sexual content including nudity. 103m. At the Broadway.

TROUBLE THE WATER: Winner of the 2008 Sundance Grand Jury Prize for documentary, Trouble the Water reveals more about the effects of Hurricane Katrina on New Orleans than most viewers will know despite the extensive news coverage of the 2005 flooding of the city and the subsequent dislocation of many of its residents.

The subject of the documentary by filmmakers Carl Deal and Tia Lessin (who have previously worked with Michael Moore) is Kimberly Rivers Roberts, an aspiring rap singer (as Black Kold Madina; you can hear her during the end credits) who stayed put when Katrina hit and then roamed her neighborhood shooting video images of the flood, others who stayed, the National Guard and the few remaining police officers.

Deal and Lessin could not have picked a better subject. Roberts, it turns out, is a bold, assertive woman who has an innate understanding of the cultural hierarchy that becomes baldly evident following the disaster. The film intermixes footage shot by Roberts with interviews by the filmmakers and archival news footage. We see Roberts roaming the neighborhood, seeking higher ground and conversing with various people, including National Guard soldiers. We discover later that Navy personnel denied Roberts and a group of homeless people sanctuary at a base no longer in active use.

Roberts hooked up with Deal and Lessin at a Red Cross shelter. The two had come to New Orleans to film the National Guard, but were denied access. Meeting Roberts must have seemed like a gift from heaven. Eventually, Roberts and her family (including dogs) move to another state to live with relatives and start a new life, but that plan doesn't take and the family moves back to their New Orleans neighborhood to rebuild.

Roberts' take on the situation is matter-of-fact and devastatingly revelatory of the national failure to render aid to the people displaced by the storm, particularly those from poorer mostly black wards. Roberts is also indomitable: No matter what comes her way, she seems always to remain positive and hopeful even when she accurately states about the people in her neighborhood, "We lost our citizenship."

The failures evident in 2005 at both the national and local levels in responding to Katrina are nothing new, but it is highly personalized by Roberts. Deal and Lessin have made a very effective film, and have found a new way of depicting the Katrina disaster, not from a bird's eye view but from the ground, focusing on the very real effects on individuals of the flooding.

We discover with end titles that a National Guard member shot one of Roberts' dogs. The country lost a lot more. This is a film well worth checking out. Not rated. 93m. At the Broadway.

BEVERLY HILLS CHIHUAHUA. Pampered dog winds up on the mean streets of Mexico. Rated PG. 91m. At The Movies and Mill Creek.

HIGH SCHOOL MUSICAL 3: SENIOR YEAR. Teen couple lives up their senior year lest they end their romance for college dreams. Rated G. 112m. At the Broadway, Mill Creek and Fortuna.

THE NIGHTMARE BEFORE CHRISTMAS. Relive the king of Halloween Town's adventures in Christmas Town in 3-D. Rated PG. 76m. At Fortuna.

RELIGULOUS. Bill Maher's unusual spiritual journey around the globe. Rated R. 101m. At the Broadway, Mill Creek and The Minor.