It's not just the sauce, it's the smoke 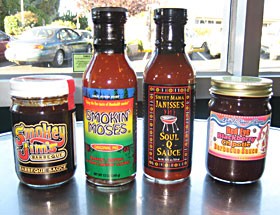 The beef brisket sandwich was as good as everyone promised. The glowing sauce -- a bizarre, grainy concoction of paprika and vinegar -- took some getting used to, but the whole combination of meat and sauce and pickle slices and icy beer pretty much couldn't be beat. (Arthur Bryant's, Kansas City, Miss.)

At Cooper's, you step right up to the outdoor pit and point at the meat you want. The pitmaster grabs it; slices off as much as you ask for; slaps it on a tray; pours a tiny bit of thin, vinegary sauce on it; and hands it to you. Then you take it inside and hand it to a cashier, who weighs it and dumps it on butcher paper -- your plate. (Cooper's Old Time Pit Bar-B-Q, Llano, Texas.)

I guess the first thing we have to tackle is the definition of "barbecue." Most Americans have never tasted real barbecue, especially most Californians. We are a culture that does not like to defer our gratification, and great barbecue is the essence of deferred, requiring five hours or more in an enclosed chamber or pit.

The pit dates back at least to the Mayans. A young pig would be marinated in Seville orange juice and annatto, wrapped in banana leaves and lowered into a pit in which the fire had burnt down to coals. The pit was covered, so that the smoke permeated the meat. The resulting flavor combined smoke, the bitter charred leaves, the annatto, the sour marinade and the caramelized meat.

From time to time, a true Southern barbecue place starts up. For a couple years there was one in Rohnert Park (actually just a few blocks away from the mothership of Porter Street Barbecue, also in Rohnert Park). It was a low-ceilinged, rather funky place -- real barbecue establishments seldom have "ambience" -- but it did cook its meat long and slow, in a closed chamber. This is known as "cool" smoking, meaning direct heat from the coals never reaches the meat; instead, the smoke arrives indirectly, but then collects -- it has no place to escape -- infusing the meat with flavor, and slowly, very slowly, cooking it to a tender flavorfulness impossible with any other form of cooking.

By contrast, California barbecue is either meat smoked over wood coals ("Santa Maria" ranch-style is the most flavorful), or simply plunked onto a grill, where the juices drain into the hot fire, sending up flavorful plumes. This, of course, wastes perhaps 90 percent of the flavor, but it is at least smoked. The alternative is simply a backyard grill, with stuff cooked over fire, not smoke, and often served petrified.

Since most people have no opportunity to experience the celestial realm of Southern Barbecue (I recommend the above Slate series, which documents one writer's journey), I am devoting this column to barbecue sauces , which can enhance both smoked and grilled meat.

Barbecue is not to be confused with barbecue sauce . As seen above, the actual sauces that accompany real barbecue can be truly weird -- e.g., "a bizarre, grainy concoction of paprika and vinegar" -- yet delicious in context. Often the very best barbecue (from some establishments in Texas and Arkansas) comes without sauce !

Mostly, what we today call "barbecue sauce" is a spiced tomato sauce that complements smoked or char-grilled meat.

There are regions in the U.S. with distinctive preferences (and remember, there is true barbecue in at least seven or eight states). South Carolina uses a mustard-based sauce, which complements their "pulled pork" barbecue. Heading west, Memphis leans toward ribs with a molasses-and-vinegar sauce, Texas, Arkansas and Oklahoma favor hotter sauces, while Kansas City's Arthur Bryant's serves a thick, sweet, rust-colored one.

Of course, as with salad dressing, the point is not the condiment itself, but its interaction with the meat. As Bruce Bjorkman, in his book The Great Barbecue Companion , says, the function of sauce is "to complement your cooking, not hide it ... Barbecue sauce should help draw out the flavor of your barbecue and grilled meats, not overpower it."

I tend to dismiss anything that is nationally distributed. No matter how "famous", the manufacturing costs inevitably mean corn syrup as a major ingredient. Sorry, no sauce can make it past that barrier for me. But time and again, consumer panels have awarded gold medals to just such sauces, most recently Iron Works BBQ Sauce , from Austin, Texas. Its first two ingredients are tomato purée from concentrate and high-fructose corn syrup. (In fairness, I should mention that Annie's Natural Original Barbecue Sauce uses rice syrup instead.)

My opinion of tasting panels, however, diminishes every time I see such results. Tasters are not immune to social conditioning; they may think they don't like corn syrup, but they don't realize that catsup such as Heinz is loaded with it, and catsup is a primary ingredient of most commercial sauces.

To my mind, the predominance of tomato paste, whether as catsup or otherwise, is a flaw in barbecue sauce. Tomato is a powerful and distinctive flavor, and a crucial element in many dishes, such as chili, where a small amount is used toward the end "to set the flavors," as Ward Fowler puts it. And it serves an equally useful role in my barbecue sauce, but not as the base.

A trip through The Ultimate Barbecue Sauce Book shows the preponderance of the same ingredients, page after page: catsup, vinegar, corn syrup (or dark Karo) and Worcestershire sauce. Sometimes there is honey, sometimes brown sugar or molasses, and spices can range from hot sauce to a dozen or more different things, but the essence of the sauce stays within a predictable range of sour and (mostly) sweet.

None of this satisfies what I look for. I want a tang and enough sugar to balance, but I also look for complexity. Most of all, I want something that is dark and earthy and mysterious, something as primal as the charred prehistoric origins of carnivorism. And while I'm not above using liquid smoke, I prefer the actual flavor from smoking.

You will not be surprised to learn that I think my barbecue sauce surpasses everything else. But like many of my favorite recipes, there is no formula, just some basics to which I add various elements until it's right. Thus each batch is different. For a long while I imagined my first two ingredients were known only to me, but there is nothing that someone else has not imagined.

There are four local barbecue sauces that can be found in retail stores. Using a Wildberries rotisserie chicken, we tasted them all, together with one batch of mine (sadly not my best, but fair is fair).

We liked them all. Here's how they ranked:

Smokey Jim's -- the best overall balance. Prominent tomato, but a good sour, picante flavor; maybe a little too much liquid smoke flavor in the finish.

Byrd's August 2007 batch #3 (not commercially available) -- rich and complex, with smoke well integrated; but too thick and not sour enough.

Mama Janisse's Soul-Q-Sauce -- strong vinegar flavor, not too sweet. A bit too much tomato, but robust flavor. Intensely Southern.

Mad River Farms Red Eye Chipotle Blackberry -- interesting off-center treatment with a fruit base. Too sweet and too thin, but admirably adventurous. Coffee is among the ingredients! A good choice for a gourmet course like grilled oysters.

I was robbed! My batches #1 and #2 were much better; the last batch was just what was left over.

Still, the good news is there are some fine sauces made locally. From top to bottom, there was nothing that wasn't superior to any nationally distributed commercial sauce.

Mustard -- prepared, Dijon or powder (but if the latter, blend with vinegar)

Red wine vinegar (or just the wine) whisked with cornstarch

Ground pan-roasted cumin (not too much)