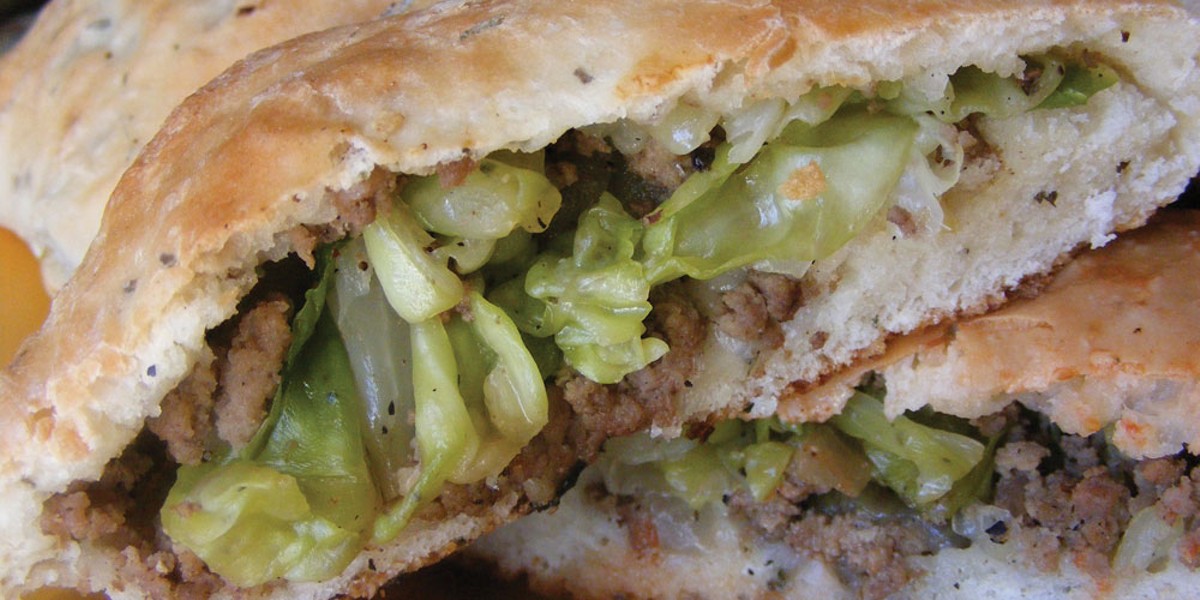 Cabbage burgers are individual-sized, savory yeast bread stuffed with peppered beef, cabbage and onions, and they are to rural Nebraskans what sourdough is to Californians. Think calzone or empanada, rather than a typical burger. In Nebraska, these little treasures are also called cabbage buns or runzas; in the neighboring state of Kansas they are called bierocks. Regardless of the name, they make for a comforting, satisfying meal fresh out of the oven or packed to go and warmed.

Their origins in the Midwest date back to the turn of the 19th century, when many German Russians (Volga Germans) immigrated to the U.S. and settled along the plains of Nebraska and Kansas. They shared their love of cabbage and introduced the region to cabbage burgers. Since then, the burgers have become beloved fare made at home or sold at bake sales, church fundraisers and in school cafeterias (back when our school cooks actually made food from scratch). They are similar to the German and Russian pirozhki and krautburgers, yet distinct.

Since the 1970s, the Nebraska fast-food franchise Runza has been cashing in on them, even selling them at Nebraska football games. Alas, homemade cabbage burgers still prevail in my book, and this recipe pays homage to my Nebraska roots.

Growing up, my Mexican family ate plenty. I suspect it's because the pillowy treats provided a good way to stretch a pound of ground beef. As a young girl, my mother learned how to make them from an older German woman in town. She's been making them ever since and they've now become part of our family food traditions.

This isn't a fancy recipe. It's real food for real people. The ingredients and spices are simple but the reward is mighty fine, especially dipped in some coarse brown mustard. Some of my family prefer theirs with salsa. We are Mexican, after all.

Don't be intimidated out of making the bread dough. There's a huge difference between homemade bread and the frozen stuff. For experienced bakers with their own favorite bread recipes, give this a try first. I've been told it is superior for cabbage burgers. It's a light bread and a perfect complement to the cabbage and ground beef filling.

If you must, substitute the from-scratch bread recipe with 2 loaves of frozen (1 pound) white bread dough, thawed overnight. Makes 8, serves 4.

For the bread dough:

To make the meat/cabbage filling: Brown the ground beef in a large skillet with deep sides. Drain the cooked meat in a colander. Reserve 2 tablespoons of grease and add it back to the skillet. Leave the browned beef in the colander. Sauté the onions and chopped cabbage until the cabbage wilts. Return the ground beef to the skillet and season it with salt and pepper to taste. Cover and reduce the heat to simmer 5 minutes. Let it cool completely uncovered.

To make the bread dough: Scald the milk over the stove or in the microwave, heating it to just below a boil, and let it cool to room temperature. In a large mixing bowl, add the sugar and warm water, then gently stir in the yeast. Let it stand 5 minutes without stirring any more. The mixture should bubble. Blend in the milk, salt, butter and flour. Mix well. Turn the dough out on a floured surface and knead it until it is smooth and elastic, usually about 5 to 7 minutes. It will be tacky until the gluten develops. If the dough is too tacky even after 3 to 4 minutes, add more flour by the tablespoonful and knead to incorporate. It may need 2 to 4 tablespoons of flour. Avoid adding much more and work the dough instead; that way your finished bread won't be tough. The final dough should be supple and smooth without being overworked. Set it aside.

Filling and folding the cabbage burgers: Divide the dough into 8 equal pieces. Roll each piece out into 6- to 7-inch rounds on a lightly floured surface (they do not have to be perfectly round). Add ½ cup of the cabbage mixture to the center of each. Add a thin slice of cheese on top of the cabbage mixture, if desired. Fold the dough into rectangles about 5 inches long by 3 ½ inches wide by overlapping opposing sides of the bread dough in the middle, like wrapping a present. Then fold over the sides, pinching the seams to avoid leaks. On a greased baking sheet with low edges, carefully place the cabbage burgers seam side down. Cover them with a dish towel and let stand for at least 30 to 45 minutes in a warm location, allowing the bread to rise.

Bake in a 375 F oven for 20 minutes or until golden brown on top and underneath. Serve hot.

Andrea Juarez has additional recipes on her food anthropology blog