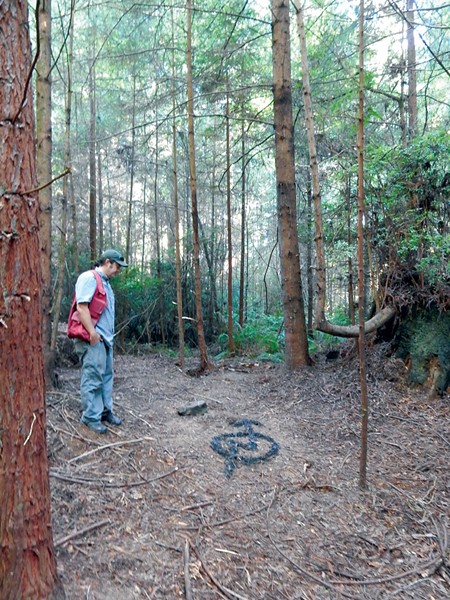 Courtesy of the City of Arcata Natural resources forest technician Michael McDowall looks at the only trace of the vanished dwelling.

This is an homage to a work of art that might not exist. The potential work is open-ended, loosely defined — it's really more of an art situation than anything else. And it all relates to the tiny, illegal, irreproachable cabin that captivated public imagination when it was discovered this summer in the Arcata Community Forest.

Back on July 23, a city employee stumbled upon a perfectly camouflaged cabin in the heart of the woods. In this part of the forest, dense redwood canopy casts permanent shadow. Massive old-growth stumps form squat, dark pillars at regular intervals, presenting ramblers with an uninterrupted visual field of dim and roughly cabin-shaped forms. Shrouded in leaf litter and fallen branches, the cabin was almost invisible even at close range. Redwood duff seemed undisturbed, with no discernible pattern of wear from repeated visits.

The 12-by-15-foot cabin was built on a foundation of cement blocks and it contained heavy objects such as a wood stove. Investigators wondered how the cabin builder managed to move these massive components to the site.

When they forced their way in, Arcata police and city employees walked into a well-kept home. The house looked like a scholar's retreat. It was equipped with humble but comfortable basic furnishings, including a manual typewriter, a spice rack and a manifesto. When authorities left the residence, they stapled a notice of trespass to the door.

Everyone ruefully agreed: This was the illegal fruit of a trespass act. Even so, coverage struck a note of awe. None of the elements regularly featured in local news accounts of illegal campsites could be identified here. Not a single piece of trash. Not one discarded needle. No environmental degradation. No human waste. Nothing! Eyewitnesses celebrated the campsite's minimal environmental impact and the builder's leave-no-trace philosophy. This was our kind of illegal camper!

Cut to the saga's next phase: On Aug. 31, it was reported that the cabin had disappeared basically overnight, in spectacularly complete fashion. No trace of movement in or out had been recorded. The site was left in perfect condition.

Before vanishing, the cabin builder (presumably) left a message, using woodstove charcoal to make a sign upon the ground. The image was inscribed in a heavy, decisive heavy charcoal line. It depicted the international emblem for squatters' rights: a circle split by an arrow/lightning bolt. Once the cabin was discovered, the maker must have realized that he or she could leverage unwelcome publicity by addressing the public in this way.

The cabin incident prompted viewers to examine their views. Who has a right to occupy public space? Who has the right to make a mark in public space? We're talking about the Community Forest — should that matter? What should it mean when a place is designated as being of the community?

Opposition to the idea of individuals' right to camp and mark in publicly owned land is certainly not based on the idea that public space is sacrosanct. We are used to visual expression in public space being monetized. In effect, this means that the right to make public images is reserved almost exclusively for the use of corporate entities. What if individuals also believed that they possessed this right? Some interesting possibilities come into view. We might see new monuments. We might get exposed to some new ideas. People might even forge a new relationship with land that does not begin and end with the right to use it to generate profit. That's not impossible. But to return to my initial question: Is it art?

People were captivated by the cabin story. But the vast majority who discussed it, at parties and bars and beach bonfires, only experienced it second-hand. The work only ever had a tenuous hold on material existence, and now that's gone. Leftovers resonate in the public imagination — what remains is an untraceable set of recollected conversations, a handful of documentary photographs and a cluster of searchable articles, of which the present text is one. Rather than undermining the situation's plausibility as a work of conceptual art, these characteristics lend it support.

Can you make a work of art by accident? The cabin builder did not intentionally initiate the cabin's career sequence of events. But, to paraphrase the adage, some people are born artists, some people become artists and some have the condition of artist thrust upon them. Clearly, the cabin builder(s) did not begin by seeking publicity. But realizing that he, she or they had been thrust into a public position, the builder(s) responded with aplomb.

In support of the "art" designation, what we have here is first and foremost a story about mark making with the builder playing a game of erasure and inscription with city authorities. The cabin's environmentally responsible, zero-impact existence was finally and fittingly memorialized through the ephemeral mark of an ash manifesto.

Public comment positioned the cabin as the hideout of a latter-day Thoreau. But it seems to me this project inverts the Thoreau dynamic. Thoreau went to the woods in search of solitude. Initially, the cabin builder might have done the same. However, unforeseen circumstances conspired to make the cabin project less about interior retreat, and more about the possibility of social change. The builder's use of the squatters' emblem made it clear that she or he hoped to pose some thought-provoking questions regarding what we honestly believe to be our human rights to viewership and self-expression — not as they exist under current law, but as they exist with regard to justice.

Is the unknown squatter an artist? Who knows? The answer really depends on to what degree a given viewer is willing to expand or contract his or her definition of creative gesture. But either way, he or she did us a solid. We want to believe in our intuitive sense of creation as immensurable. We haven't relinquished the old romance of trackless wilderness, even though we are ruefully aware that we exist in the age of Google Maps. Legends of this self-reliant hermit are like Bigfoot rumors: They captivate us because they answer our need to make the forest less knowable and manageable. They bring back a measure of the woods' enchantment.