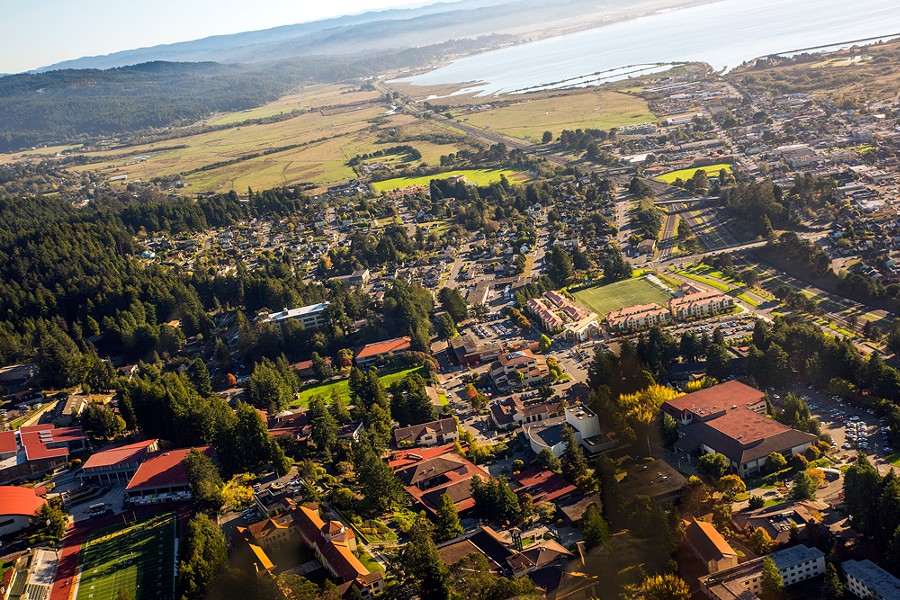 When and where I was a kid — 1950s, Britain — it was science or arts. No middle ground, nothing nuanced about my education. If you were "science," you looked to engineering or medicine for your future. If you were "arts," you ended up doing, well, something else — usually more creative. I became a civil engineer: three years at the University of London, no electives, no nothing if it wasn't engineering. The limitations of my education hit home when I saw a pal reading Russia and the USSR: The Big Three. "Who are they?" I asked, and he gave me a despairing look. (Hint: It wasn't Gorbachev, Yeltsin and Putin.) The science/arts dichotomy in which I grew up was later labeled as "left-brain" and "right-brain" although, truth be told, there's no evidence that any of us uses one half of our brain more than the other.

Now Humboldt State University is going left-brain, as it were, since it's in line for a $458 million grant to turn itself into the third California polytechnic, joining Cal Poly San Luis Obispo and Cal Poly Pomona. Meaning, essentially, it's going full-on STEM: Science, Technology, Engineering and Mathematics. Not that HSU is currently chock-full of painters, sculptors and other liberal-arts visionaries. It currently has the highest rate of STEM students who go on to earn a PhD in the California State University system, and its percentage of STEM program students is just behind that of the two other polytechs. However, with steadily falling enrollment, HSU needs to do something different. The desperate situation is reflected in its low-bar admission rate of 92 percent, compared to 45 percent and 25 percent for Cal Poly Pomona and Cal Poly San Luis Obispo respectively.

While the STEM acronym summarizes the focus of what will be taught, the label "polytechnic" underlines how it will be taught. The polytech approach emphasizes hands-on, experiential learning, "ensuring students get a chance to apply what they are learning, making new graduates career-ready," to quote the HSU website. To grasp what STEM entails, it's worth looking at the "S" in particular. Science as a whole is usually thought of as embracing three disciplines: natural science, such as physics, chemistry and biology; formal science, including mathematics, statistics and logic; and social science — sociology, psychology, political science, economics and the like. STEM focuses on the first two, as can be seen in the technology, engineering and math parts of the acronym. (Today, social science is typically lumped in with humanities and arts, hence HASS, the counterpoint to STEM.)

So in a way, for our local university to switch to an official polytechnic designation is a pretty natural development, with HSU already offering so many STEM-oriented courses. Its website lists a broad spectrum of such programs, including marine science and fisheries, forest ecology and renewable energy, in addition to programs oriented to social science: psychology, anthropology, social work, nursing and kinesiology.

This is good news, not just for the local economy (HSU is the county's largest employer), but also for California as a whole, balancing out the locations of the other two polytechs, one in Los Angeles County, the other on the border of Northern and Southern California. Having a polytechnic university up here "in the heart of the redwoods" (they're around here somewhere) should attract STEM-focused students from Santa Cruz north. Done right, it will also help alleviate the current gender imbalance, wherein women, who make up nearly half the U.S. workforce, hold only 24 percent of the STEM jobs. Hopefully, the move will also improve the nation's dismal showing in STEM education. Compared to the rest of the world, we rank 35th in math and 25th in science out of 109 countries.

HSU is currently engaged in a "self-study" leading up to the polytech designation, to be presented to its Board of Trustees in January of 2022. With luck and diligence, within a couple of years HSU will have transformed into CPH: Cal Poly Humboldt. It does have a nice ring to it.

Barry Evans (he/him, barryevans9@yahoo.com) got to figure out Lenin, Trotsky and Stalin late in life.