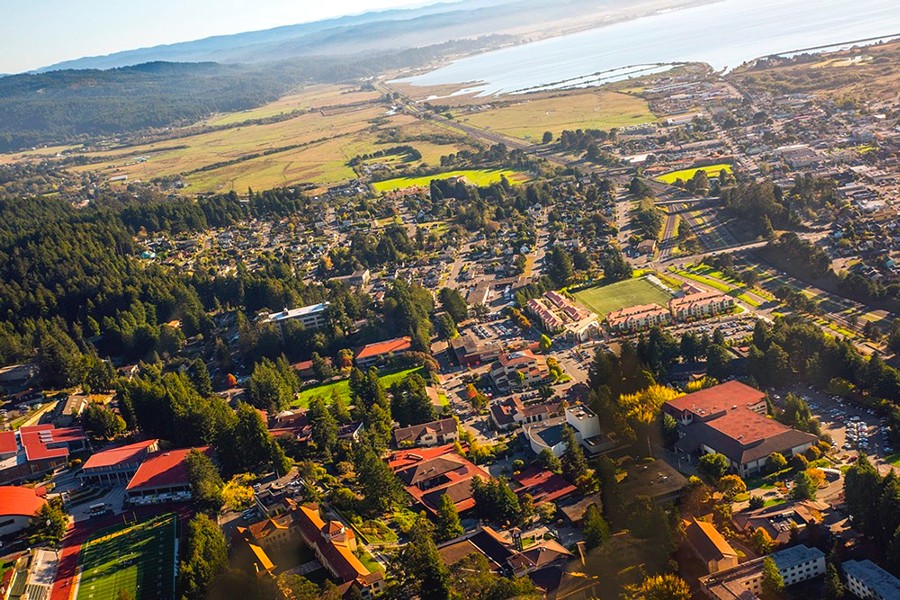 Two months after officially becoming the state's third polytechnic university, Cal Poly Humboldt signed a March 22 purchase agreement for a 16-acre vacant lot on the eastern edge of the Arcata Bottoms, putting down a $54,000 deposit on what campus officials have described as a "strategic" investment.

The parcel was apparently considered essential enough that the university made a cash offer of $5.4 million without an appraisal contingency — ultimately paying more than three-times the land's estimated value.

"This was the best price that could be negotiated for the property," Cal Poly Humboldt spokesperson Grant Scott-Goforth said in an email when asked about the price. "In addition, it is a strategically valuable property for the university, given our need for space to grow as part of our polytechnic transformation."

That transformation includes sweeping plans for a host of new academic programs, more than $680 million in infrastructure projects that will reshape the campus, a doubling of student enrollment over the next seven years and nearly $12 million for land acquisitions — one of many indications that more forays into the local real estate market are likely in Cal Poly Humboldt's future.

When and how the deal with seller Foster Avenue LLC — owned by Danco's Dan Johnson and Sun Valley Floral Farm's Lane DeVries — for 2000 Foster Ave. came together is not entirely unclear. Scott-Goforth declined to answer directly, citing the university's need to keep negotiations confidential, but said, "Once approached, we engaged in discussions, realized this property could benefit our university's transformation and proceeded with negotiations and eventual acquisition."

The purchase came as news to city officials and board members of a nonprofit that had been in talks with Foster Avenue LLC for well over a year, with the seller and the nonprofit having signed a non-legally binding letter of intent to work together in December of 2020. That was followed in January of this year with another letter of intent signed by both parties under which the nonprofit agreed to buy 12 acres for $3 million with plans to develop a senior living community. But no formal contract was signed and, within months, Cal Poly Humboldt had agreed to pay nearly double the price.

According to board members of Life Plan Humboldt, which is now looking at other properties to build its age-in-place living community, talks stalled after the January letter of intent was signed but there was no communication about another party being interested until Cal Poly Humboldt's announcement that it had bought the property July 5, a few hours after a new deed was officially filed with the county Recorder's Office.

Scott-Goforth declined to state whether the university had been aware of the nonprofit's purchase offer, also citing the confidentiality of negotiations.

For years, plans for the site had centered on a proposed Danco project called Creekside Homes, which included a 32-house neighborhood, with the same number of accessory dwelling units, as well as a 100-bed memory care facility and 25 senior-only cottages.

Two years ago, the city and Foster Avenue LLC entered into a development agreement that included provisions that the LLC was to "pay certain fees for traffic impacts, wastewater treatment impacts and water storage impacts," according to the city, which then annexed the property from the county in March of 2021 to move the process forward.

"The intention was always that the site would be used for some form of housing," Arcata Community Development Director David Loya said. "However, the city is going through a new 20-year General Plan planning cycle and will have adequate lands designated for housing through that process. While the city will not likely have regulatory authority over any project that is designed and built by Cal Poly on the site, most of the infrastructure measures required of the Creekside project will be required of any project that is built on the site."

As of now, the 2020 development agreement remains on the books.

"The agreement hasn't terminated. It is still on title," Loya said. "It is unclear whether Cal Poly will be subject to any of its clauses. But it hasn't been removed or terminated."

What the university will not be paying is property tax, due to its exempt status as a public school, effectively removing $53,000 annually from the local property tax rolls, according to a 2018 Fiscal Analysis done on the annexation.

When the university and Foster Avenue LLC first started talks is unclear but the timeline that is known comes from documents included with what's called a "due diligence" report that campus officials are required to file with the CSU Office of the Chancellor for review to receive approval for a land purchase.

The earliest document is a preliminary title report dated March 11, followed by the March 22 purchase agreement with a 67-day escrow period, which Scott-Goforth said was later extended, and then a March 31 appraisal report, which valued the land at $1.07 million.

The due diligence process, according to Hazel J. Kelly, a spokesperson in the CSU Office of the Chancellor, includes examining "funding sources, title history, environmental review and assessment of structures, if applicable."

The goal, Kelly wrote in an email to the Journal, "is to ensure that the CSU is making an acquisition that is in the best interest of the university." But sometimes, she wrote, "the process is expedited and the due diligence investigation happens at the same time a transaction is moving forward."

Scott-Goforth said that was not the case for Foster Avenue and the escrow period allowed time for the university to "perform its due diligence," describing the three-months of study that went into the purchase as "typical of the CSU process."

The due diligence report itself is dated June 28, a day before CSU Assistant Vice Chancellor of Capital Planning, Design and Construction Elvyra San Juan finalized the purchase on behalf of the California State University Board of Trustees.

The report cites the campus' recent Cal Poly designation and the need for additional resources "to respond to an anticipated increase in enrollment and overall growth," describing the parcel as "positioned well as far as size and proximity to the campus." Additionally, the report notes the property has undergone numerous "site-specific special studies" during the annexation and development review processes.

It also states that while the current Facilities Master Plan from 2004 calls for the university to expand its "land holdings to support university growth" and focuses on properties that are "contiguous to the campus footprint," that "strategy has proven to be infeasible."

"The subject property allows flat, contiguous, buildable land within a mile of campus that meets the goals and intent of our master plan and current planning initiatives," the report states, noting "off-campus properties are appealing because the current Cal Poly Humboldt campus proper is bound by forestlands to the east, Highway 101 to the west, and single-family neighborhoods to the north and south."

The university hasn't released any information on what might be built on the site.

"Cal Poly Humboldt knows this additional space for growth is needed. The University has not determined a specific use for the property at this time," Scott-Goforth said in response to a Journal inquiry about why the campus needed to buy the parcel. "It would be appropriate for a wide range of facility usages to support our polytechnic transformation; all of this parcel of land will be dedicated to projects and facilities in support of Cal Poly Humboldt's campus objectives."

In the July 5 announcement, Cal Poly Humboldt said the land "will be used to support any of a number of institutional priorities aligned with our polytechnic transformation" and "play a vital role in efforts to provide a positive, meaningful educational experience for students."

The university also stated it "continues to explore other property acquisitions that align with the educational needs of our students, as well as supporters and partnerships for a variety of efforts" and that the campus was "embarking on a comprehensive facilities planning effort" that will "help many stakeholders to engage in the long-term transformation of Cal Poly Humboldt's campus and off-campus sites."

According to the due diligence report, funding to acquire the Foster Avenue property was "identified from a combination of Housing and Parking Reserves," which CSU policy seems to indicate would require the property be used for one of those applications. The document simply describes the property's intended use as "undetermined."

Whatever development occurs, the university will follow requirements set down by the CSU and the state of California, including CEQA compliance, according to Scott-Goforth and the due diligence report.

"Cal Poly Humboldt has been in touch with partners at the city of Arcata and others in the community and will continue to work with them," Scott-Goforth said.