Sometimes it takes a village, or maybe just a lounge 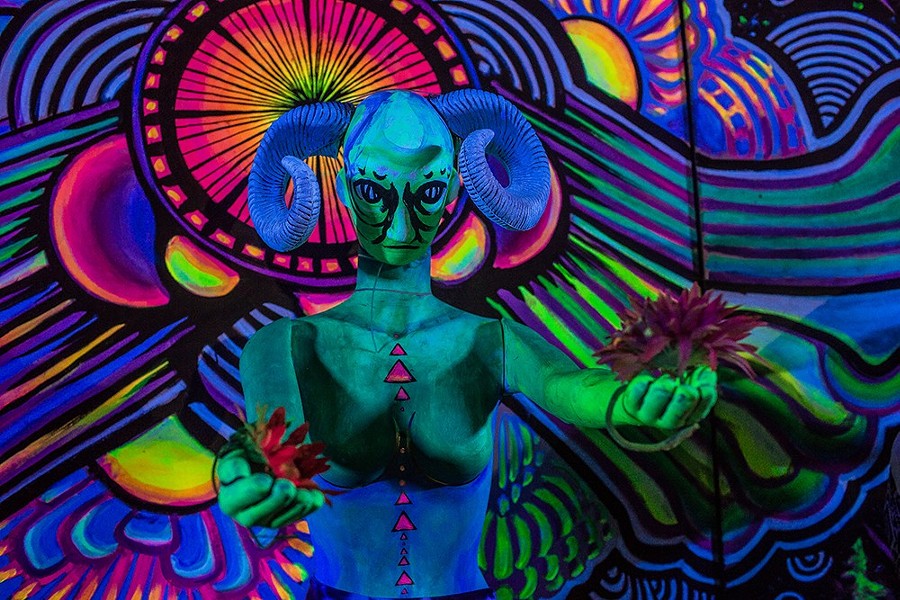 File Close-up of a horned statue painted by artist Blake Reagan at the 2018 Northern Nights Festival.

Southern Humboldt's summer music festivals are breaking new ground this year and will feature designated cannabis areas, where revelers can legally purchase and imbibe to their hearts' content with a seal of approval from the state of California.

Northern Nights Music Festival announced last week that it would be the "first-ever three-day music festival" and the "first ever overnight camping music festival to allow recreational cannabis dispensing and use on-site in the country." We can't speak for the in-the-country claim, but it does appear that the festival — to be held at Cook's Valley Campground along the South Fork of the Eel River on the Humboldt-Mendocino county line July 19 through 21 — will be the first of its kind in the state to feature legal sales and use, which the Legislature approved last year with the passage of Assembly Bill 2020, providing a process for "special event permits" to allow onsite consumption and sales.

The festival — which is akin to a Reggae on the River but for the EDM set — will feature the "Northern Nights Tree Lounge," where folks 21 and up will be able to purchase cannabis from eight to 10 vendors, "including the farmers themselves so festival guests can purchase directly from the source and spark up educational conversations," according to the site. Northern Nights co-founder Andrew Blap told Billboard that the lounge is designed to highlight small cannabis farmers in Humboldt and Mendocino counties.

He said Flow Kana — a San Francisco-based distributor that stakes its brand on getting "sustainable, sungrown" small-batch cannabis to market — is sponsoring the lounge and will do a "farm to bong competition."

"It will take local produce and vegetables and you're going to be able to carve a bong and the winner will get announced each day," Blap told Billboard.

Not to be outdone, Reggae on the River — which, you may recall, is now being produced by High Times Productions Inc. under an agreement with the Mateel Community Center — also has some big plans for its festival, which will take place a couple weekends after Northern Nights and about a mile north at French's Camp.

As first reported by the Lost Coast Outpost's Ryan Burns, the Humboldt County Planning Commission on May 2 unanimously signed off on a conditional use permit that includes plans for a "cannabis village," a permitted 40,000 square-foot area that will feature more than 120 vendor or exhibitor tents and a designated area to imbibe.

Both the "lounge" and the "village" will be physically separated from areas where alcohol will be sold at the two events, per state law, and Northern Nights even notes that sales of the two mind-altering substances will take place in different counties, as Cook's Valley Campground straddles the county line. (For those keeping score at home, the weed will be sold in Mendocino, the alcohol in Humboldt.)

It will be interesting to see how this goes at the events, both of which had reputations for being cloudy, cannabis-infused free-for-alls long before recreational weed was legalized at the start of last year.

One can imagine them playing out somewhat akin to California's recreational market as whole: Both festivals will have small areas where cannabis will be tightly regulated, taxed and sold to consumers with proper identification at marked-up prices that reflect the state's packaging, testing and tracking requirements. Outside these fenced-in areas, we imagine weed will be plentiful, if possibly contaminated, and sold at rock-bottom prices to anyone who can come up with the cash, regardless of age or ID. And at the end of the day, organizers will lament that regulated sales didn't do as well as projected.

But hey, at least that farm-to-table bong contest sounds like a hit!