Call Me By Your Band Name 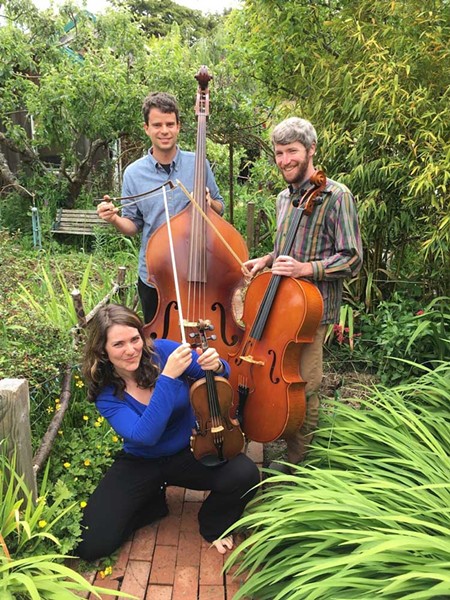 Courtesy of the artists The Bowlicks play the Sanctuary at 7:30 p.m. on Friday, May 18.

The more creatively named bands featured this week got my wheels spinning down memory lane. Despite a preternatural and seething distrust of all things over and done with, I couldn't help thinking about some of the uniquely named groups I've encountered over the decades. I myself used to front a New Orleans-based punk/psych outfit called PonyKiller, named after any car that can beat a stock Mustang flat-out in a street race. During those years I encountered Child Bite, Dumpster Dummy, Evil Army, Red Shield, Mountain of Wizard and Cavalcade. I once watched a trio of large men in North Carolina play doom metal under the moniker Pig Mountain and a foul-mouthed hip-hop puppet named Doogie Fontaine. And to what end? To paraphrase Roy Batty in Blade Runner, all these moments will be eventually lost in time, like tears in rain.

Have a swell week.

There's raw vinyl in Eureka for the starved polymer gourmand. Phatsy Kline's features Marjo Lak spinning black gold on her decks at 7 p.m. for the weekly Laidback Lounge and over at Siren's Song at 8 p.m., the 33 and a third Thursday brings old skool sounds curated by DJs Goldylocks and Fade. As always, both events are free as a bird.

Meanwhile, at the Arkley Center, The Eureka Symphony Orchestra closes its 2017-2018 season at 8 p.m. with a repertoire including Cherubini's Requiem No. 1 in C Minor ($19-$49). The show is called Transitions from the Past and features a sale of prints by artist Katherin Burleson from her Creation series.

Rock 'n' roll's afoot in Eureka and Arcata at 8 p.m. I used to call two simultaneous shows I wanted to see at different venues "slingshot shows," which made sense to me at the time. Anyway, slingshot your way across the bay and back to catch what you can of these two if you have the fortitude. Siren's Song has one-man band Kenny Bowling opening for FHOG — short for Finger Hash of the Gods — and the always exquisite Ultramafic (price TBA).

Up at the Outer Space, groove rock royalty Lord Ellis burns down the house in honor of its latest release Mouth of the Mad. Skate punk slack-engine Imperial Destructo opens ($5).

Metal is on the menu tonight at the Siren's Song at 6:30 p.m. for those suffering from twee-fatigue or iron deficiencies (price TBA). Join Yreka's thrash masters Chains of Belmont — that has to be a Castlevania reference, right? — with Shasta Lake City's Bullet Lobotomy and local metal mavens Muppet Hunter and Unholy Orifice (moment of appreciation for two stupidly cool names) for a neck bending blood-feast.

So a band from Athens, Georgia, named itself Eureka California and is playing the Miniplex tonight at 8:30 p.m. (price TBA). A dip into its discography didn't reveal the duo's reason for such an oddly specific local name but I enjoyed the 7-inch Wigwam. Arcata California's Super Senior and Blood Honey provide local support.

Why is my pulse elevated, my pupils dilated and my body hair erect? Because OG punk/thrash masters D.R.I. — Dirty Rotten Imbeciles — are playing the Arcata Vet's Hall tonight at 7 p.m. ($20/$15 advance). And although I have listened to them since I was knee-high to a grasshopper, I have yet to see the esteemed Messrs. Brecht and Cassidy live. My inner disaffected youth is knifing his way out of my pathetic, aged carapace to cry havoc and let slip the dogs of war once again. Deathwish, Scythe and Scum Lourdes provide support.

Siren's Song hosts a Hip Hop and Ladies Comedy Night at 9 p.m. ($5). The unusual assemblage features local DJs, rappers and female comedians in a likely fun mash-up. Full disclosure, I have a pig in this poke — my insanely talented middle brother Ian will be spitting his spoken-word rap stylings under the moniker Rufian so you bet your brass monkey I'll be there. So will DJ Goldylocks, Flow J Simpson, Jessica Grant, Melissa Gordon and many more.

Collin Yeo has been a vampire hunter, space pirate, prince of the universe and Mario Brother. He has also rarely played video games. He lives in Arcata.