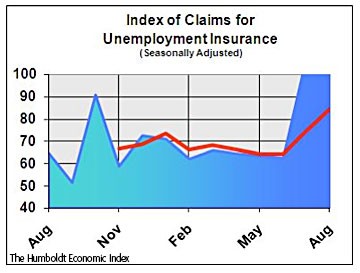 The world economy teeters on the verge of collapse. Stock markets in the U.S., Europe and Hong Kong resemble Richter readouts from the Big One. Wall Street brokers' heart rates leap tall buildings in a single market rebound while here on the Main Streets of Humboldt County we look desperately for answers.

What does it mean for us? Will the villainous credit crisis and impending recession destroy our home values, obliterate our 401(k)s and lay waste to our industries here behind the Redwood Curtain? Where can we turn in our time of need?

Last week, a team of mild-mannered financial eggheads gathered for a panel discussion at HSU -- four professors, the president of a local bank and a certified public accountant/business consultant, all called to action by Maggie Gainer, director of HSU's Office of Economic Development. They sat behind two tables, exuding calm confidence to the nervous crowd gathered in the Goodwin Forum of Nelson Hall East. It was the Fiscal Justice League, here to save the day!

Or at least, that seemed to be the hope of some in attendance. Whether worried, confused or angry, the citizens of our humble county wanted answers. HSU Economics Department Chair Erick Eschker began with a refresher on how we got here.

"There was a credit bubble," he said, "lots of money looking for a place to earn some returns in the early part of this decade." It ended up in housing, which had its own bubble inflated by loose (read: "irresponsible") lending. Wall Street made matters worse by funneling the risk into mortgage-backed securities and inventing creative trading instruments -- "creative," in retrospect, being a euphemism for "bat-shit crazy."

It was a house of cards suspended by collective faith that the housing market would increase forever. It didn't, clearly, and we're all now suffering the aftermath. "You've heard the term, 'Money makes the world go 'round?'" Eschker asked. "I like to instead say, 'Credit makes the world go 'round.'" In the modern world, no credit equals no economy.

That's a simplified version of the state of the world economy. So, what about here? Eschker recently released his assessment in a paper with the sobering title, "The Pain Begins." In it, he says the local seasonally adjusted unemployment rate has increased to a level not seen in more than 10 years. Claims for unemployment insurance also jumped in recent months while help wanted ads have declined. "All signs point toward a softening labor market," he wrote.

Makes you want to reminisce about the good ol' days. But it was those very days that led us to where we are now.

Good times, to be sure. But that economic model was unbalanced, Ruprecht said. Since we didn't produce the things we consumed, we depended on our exports to bring in money. That worked fine while the industry thrived. But when it declined seriously in the ’60s and ’70s, the whole county went with it.

According to the panel, we've gone a long way toward developing a more stable local economy by diversifying. The Workforce Investment Board has identified six areas of growth in the county, compiled in a report released last year called "Targets of Opportunity." (View it at www.humboldtwib.com.) In order of size those targets are: diversified health care; building and systems construction and maintenance; specialty agriculture, food and beverages; investment support services; management and innovation services; and niche manufacturing.

"These industries now account for almost 40 percent of employment and over 50 percent of wages" in the county, Ruprecht said. Another 20 percent of the workforce is employed in the public sector (thanks largely to HSU), compared to a statewide average of 16 percent. "That will help us," said Economics Professor Dr. Beth Wilson. "It seems unlikely that HSU will close down."

Many locals believe the North Coast will be protected from this crisis by its relative insularity — Redwood Curtain as security blanket.

"Our isolation is unlikely to save us," Wilson said. Her colleague, Dr. Steve Hackett, agreed. The whole world is essentially swimming in the same economic pond, he said. "When someone throws a rock in the pond, the waves are gonna hit us just like they hit other folks," Hackett said.

In fact, those waves could hit us even harder than other areas since so much of our economy is dependent on discretionary spending. From retail to tourism and the service industry, much of what we sell is expendable in tough times.

"People are being much more careful with their money right now," said Jay Reed, a CPA and business consultant with Aalfs, Evans & Co. "Suddenly there's competition for those discretionary dollars, and that's reason for significant concern for our economy." He cited recently released numbers for the U.S. consumer confidence index, which dropped from 61.4 percent to 38 percent. Worried consumers pinch pennies.

So what do we do? "We've got to be smarter and find a competitive advantage," Reed said. The North Coast has some inherent assets including the intelligentsia at HSU and an ahead-of-the-curve attitude about alternative energy.

Hackett said developing renewable energy has distinct challenges, notably a bottleneck in the state grid system that limits our ability to export energy. Wave energy is promising, he said, but Western Europe is currently offering more institutional incentives so will likely get there first. There are also hurdles in the way of finding credit and obtaining permits from the California Public Utilities Commission.

Nevertheless, Hackett said green energy has "great potential" for the North Coast. "Shell Wind is currently investigating developing wind energy on Bear River Ridge," he said, "and wind is one of the cheapest forms of energy."

John Dalby, president and CEO of Redwood Capital Bank, suggested banking locally, and while that clearly would benefit his own bank, the argument made sense. Of the $1.4 billion of FDIC insured deposits in Humboldt County, less than 10 percent is controlled locally. Dalby said money placed in non-local institutions gets put to work in other communities.

As for questions surrounding the federal bailout (Will it work?), the recession (How bad will it get?) and national markets (What will my house be worth next year?), the panel had few answers. Turns out they're only human after all.

But on the consumer end of the equation, they said the solution might be as simple as a single word: frugality. Simply put, we need to stop spending more than we make, Hackett said. That will probably mean a drop in retail sales, he warned, but spending responsibly will help us in the long run. "We have to learn to live within our means again," Hackett said.

So while the Fiscal Justice League may not be able to save the day by themselves, they were able to elucidate some possible roads to recovery, roads that will require nothing superhuman, just hard work, ingenuity and a little tightening of the belt. Maybe we should send them to Wall Street.