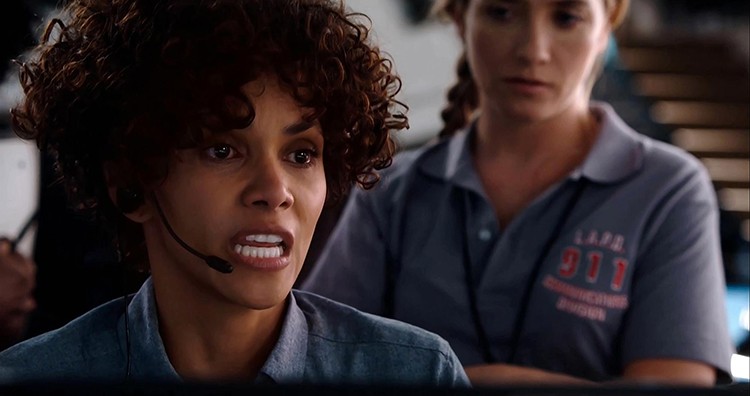 THE CALL. Despite a few original twists and turns, and an impressive performance by Abigail Breslin, this would-be thriller is just another mid-March waste of time.

Los Angeles 911 operator Jordan Turner (Halle Berry) takes a call from a terrified young girl whose house is being broken into by an anonymous prowler. Jordan manages to help the girl outwit her assailant, but when the call is disconnected, Jordan calls back. The ringing phone reveals the girl in her hiding place. Her body is discovered in a shallow grave a short time later.

Six months elapse, and Jordan has hung up her headset in favor of teaching new hires inside the call center. But when a call comes in from a just-abducted teen girl (Breslin), Jordan is called upon to take it. As the call and ensuing manhunt progress, it becomes clear that the kidnapper is the killer from that tragic earlier incident.

That much of the story is taut and really pretty original. But from there the suspense evaporates and logic flies out the window. Jordan's PTSD is depicted, in its entirety, as a few seconds of short breath, easily resolved by running her hands nervously through her hair. Her on-again, off-again patrol cop boyfriend (Morris Chestnut) inexplicably takes the lead in chasing down the kidnapper. And the kidnapper turns out to be a by-the-numbers aspiring serial killer from a white-bread suburban family who has a grisly fixation on his long-dead sister.

By the time Jordan takes the investigation into her own hands (who wouldn't, right?) The Call has spent so much time in hackneyed territory that it's hard even to muster the energy for frustration.

In spite of such low standards, Breslin gives a riveting, sometimes heartbreaking performance. She moves from teen-girl snottiness to terror to anger with an alacrity that Berry could take a few notes from. Unfortunately, Breslin spends much of the movie in the trunks of cars, so a lot of her physical acting gets lost to darkness and static camera angles.

*The Call* is just good enough to give a glimpse of what might have been. Perhaps a different director could have translated the script into a tense, efficient little thriller, but a few effective scenes notwithstanding, Brad Anderson surrenders the story to lazy exposition, superficial scene development and predictable characterization. R. 95m.

THE INCREDIBLE BURT WONDERSTONE. Incredible it ain't. Steve Carell could be a great big movie star if he didn't keep getting in his own way. He's been anointed the family friendly comedy star of the moment. All well and good: He generally turns in sturdy if unsurprising performances. The problem is that nobody seems to write funny or original family comedies these days.

Carell's most entertaining roles are in more adult-oriented movies where he gets out of the "dad next door" shadow -- The 40 Year Old Virgin and Anchorman*, in particular, but even the sometimes syrupy Crazy Stupid Love* gave him a character with some depth.

I like Carell, and I think he's got it in him to take on more demanding roles. I look forward especially to the upcoming Foxcatcher from director Bennett Miller (Capote, Moneyball). But that's in the future; for now we've got predictable, sentimental Burt.

Carell's title character is half of a Las Vegas magic act that's getting long in the tooth, its audiences dwindling. Yet even faced with the growing success of street magician Steve Gray (Jim Carrey), a cartoonish Criss Angel/David Blaine type, Burt refuses to change his outdated act. This precipitates a falling out with his partner, Anton Marvelton (Steve Buscemi), and the loss of his prestigious and lucrative contract with Bally's Casino. So Burt must start all over again, with a little help from the magician who inspired him as a boy (Alan Arkin) and a gorgeous up-and-comer (Olivia Wilde) who (unbelievably if inevitably) falls in love with him.

Somewhere in here is a funny satire of modern magic. Maybe studio tampering declawed this thing. Carell and Buscemi deploy their near-perfect timing and penchant for oddness, and Carrey gets back into his '90s slapstick rhythm. But it's not enough. The jokes are too tame, the resolution's too predictable, and the characters are far too simplistic. A few funny gimmicks and asides from a reliable cast are the only minor pleasures amid dull, slapped-together Hollywood drivel. PG13. 100m.

OLYMPUS HAS FALLEN. Gerard Butler tries to maintain his string of cinematic stink bombs with this action-thriller, which borrows the plot from Die Hard and puts it inside the White House. With Aaron Eckhart as the president (hmm) and Morgan Freeman as someone with gravitas. R. 100m.

ADMISSION. Are Tina Fey and Paul Rudd the most charming actors in movies today? I'm gonna say "yes." Here, Fey plays a Princeton admissions officer and Rudd's a teacher at an alternative high school who wants her to meet a promising kid. Could he be the son she gave up for adoption? I'm gonna say "yes." PG13. 117m.

The Future Shorts Film Festival returns to the Arcata Theatre Lounge Friday at 8 p.m. with a new selection of award-winning short films from around the world. Looks great. Sunday, my favorite Pixar movie, The Incredibles, plays at 6 p.m. And next Wednesday, the world must defend itself from such colossal creatures as Mothra, Godzilla and Rodan as the 1968 B-movie classic Destroy All Monsters invades Sci-Fi Pint and Pizza Night. 6 p.m.

21 AND OVER. The Hangover premise (drunken morons breaking stuff) recycled with characters who are barely legal. R. 93m.