And a Khmer eggplant and pork smoke-out 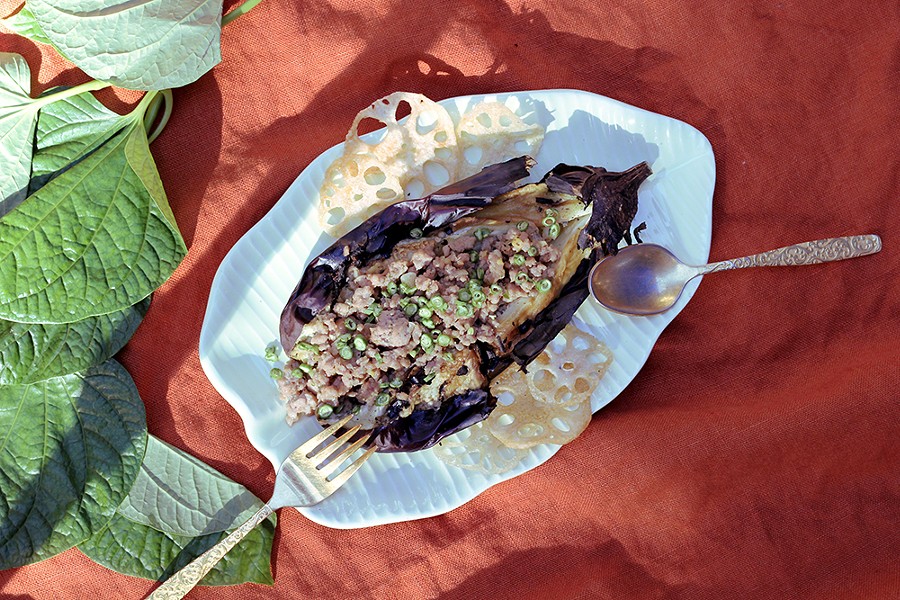 Photo by Malina Syvoravong . Styling by Deena Hashem. This eggplant is a smoke show.

Usually I'm more than excited when a fellow Southeast Asian has won an award for culinary prowess but, this time around, I wasn't amused. Humboldt residents, you voted for a Cambodian restaurant to win the North Coast Journal's Best Chinese Restaurant award. Anthony Bourdain is probably rolling in his grave right now. China and Cambodia each have their own unique historical, political, social, environmental, economic, cultural practices and traditions in food. The Khmer people, another term for Cambodians, do have rice as their staple but it is one of few things they have in common with the Chinese, other than the continent they share. I don't even want to start on how many different types of regional cuisine China offers.

That said, I'm still pretty excited to know there is a huge fanbase for Annie's Cambodian Cuisine. For those who didn't know, Annie Chau and her husband, Chin, were once the owners of Happy Donuts. Yes, that drive-thru doughnut shop near the Winco and CVS in Eureka. It didn't have the rowdy post-bar crawling crowds and disco ball lighting of a late-night trip to Don's Donuts, and I can only speak knowledgeably about that period, but if the shops were compared solely on doughnut merit, Happy Donuts circa 2005 would've won. Fight me on that.

I spent so many days sitting back on those slick booth seats, under the glare of your typical doughnut shop fluorescent lights, watching the doughnut-making and purchases. I still remember checking on the dough cut-outs proofing in the back, watching the workers glaze each freshly fried treat and memorizing all the regulars' orders. Chin would occasionally let me watch him fry the doughnuts or add a sprinkle here and there, and, of course, I was allowed to have all the doughnuts and hot chocolate a teenager could ever possibly want. Why would a teenager spend all of her time after school at a doughnut shop, might you ask? Well, my mother and father worked double shifts during my late high school years so I was left in the care of Annie and Chin during the evening. The Southeast Asian community in Eureka was small, so we all knew each other and helped out in times of need, which mostly meant taking care of each other's children.

Being in the shop and home of Annie and Chin led to learning about the types of food that Cambodian families ate at home. A lot of the dishes are quite similar to the Lao cuisine I know, with its use of a similar fermented fish condiment. Prahok, a fermented fish paste, is the go-to condiment for adding flavor in Cambodian cuisine because of its strong fish essence and saltiness. As an ode to Cambodian cuisine, Annie, Chin and my parents, I took a traditional Cambodian dish and adapted it to cha traop dot, an eggplant dish that was a favorite at my family's now defunct Eureka restaurant Hue Southeast Asian Cuisine. I wanted to make this dish easier to cook at home so I've found some substitutes you can find at your local market and given the recipe flexibility to adjust to your own needs or taste. Even Safeway offers fish sauce and lemongrass now so don't skimp on those.

You'll need a broiler, gas stove or some sort of open flame to smoke the eggplant. Open a window. Serves 4.

4-5 Japanese eggplants or any thin eggplants, washed and dried

¼ pound chopped shrimp (shrimp should be peeled, deveined and cleaned)

2 tablespoons oil (any oil with a high smoke point, such as grapeseed or peanut oil, works great)

1 bird's eye chili, finely chopped (or more if you can tolerate spice)

7-8 sprigs of cilantro, chopped, for garnish

Salt and black pepper, to taste

Over an open flame or under a broiler, char your eggplants 2-3 minutes on each side. Then, place the eggplants in a baking pan, cover them in foil and roast them in the oven for 15 minutes. The eggplant is done when it's soft, with skin that sinks in when pressed and translucent flesh.

In a wok or large frying pan over medium-high heat, pour in the oil. Add the pork, breaking up the ground meat into smaller pieces, and let it brown. Add the garlic, lemongrass, chiles and sugar, and keep stirring so it's fully coated with the sugar.

Toss in the shrimp and give the pan a light stir, careful not to break down or overwork the shrimp. Add the fish sauce or paste and oyster sauce, stirring to deglaze the pan. Add 2 tablespoons of chicken stock or coconut milk to create a sauce, adding more until you have the desired amount of gravy.

Place eggplant on a plate to serve. Peeling the purple outer skin is optional but I love the color variation to the dish so I keep it on. Using a paring knife, make a slit lengthwise from the top of the eggplant to the bottom, so that it exposes the delicate flesh of the vegetable. Fill the opening with the stir-fried pork and spoon over the gravy. Salt and pepper the dish to taste and add cilantro garnish before serving over rice. It's highly recommended to enjoy this meal while listening to vintage Cambodian psychedelic surf rock and researching where Cambodia is on the globe.

Malina Syvoravong is a Humboldt native currently living in Oakland, freelancing as a prop and food stylist. She spends too much time with her roommate's dog Moro and is always up for a night in, doing nothing.