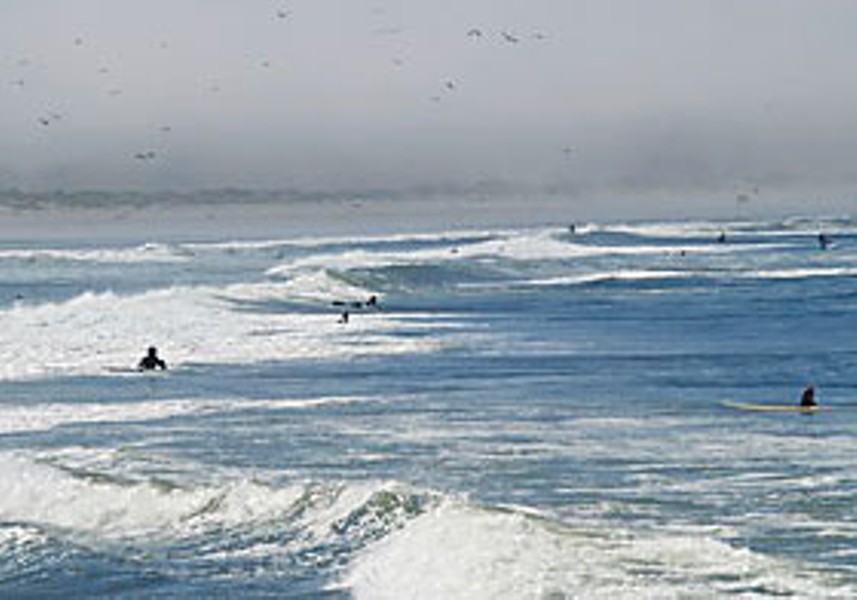 A lone surfer manages to get a little breathing room while riding down the face of a wave. Photo by Jennifer Savage.

In Humboldt County, surfing doesn’t exist. Don’t believe it? Go ahead, ask the next guy parked outside Wildberries with a stack of boards poking out of the back of his Tacoma, salt crusted in his hair, cell phone and tidebook splayed on the dash. Ask, “So where’s the best place to surf around here?” He’ll look at you as if you’re speaking a foreign language — which in a sense, you are.

Like undercover work, surf knowledge revolves around interpreting what doesn’t get said, what one isn’t told. Asking direct questions prompts vague answers at best, antagonism at worst. For a culture in which “talking story” is a defining characteristic, surfers are notoriously close-mouthed when sharing information with those outside their immediate circle. No matter how well known, how obvious a break is, surfers will claim ignorance rather than name a place where the waves might be good. (Not that any waves on the North Coast are ever good — and did we mention the sharks?)

Similarly, no one wants their name on a quote involving a surf spot, not even one with its own webcam, not even one that has become so ridiculously crowded and popular over the past few years that many lifelong Humboldt County surfers refuse to surf there, even on perfect, glassy days when the peeling waves offer up a rare promise of consistent fun. (Not that such a thing ever happens around here — and even if it did, you’d have to navigate the ice-cold, shark-filled waters. Yikes.)

But if someone were to comment on the overcrowding problem and resultant bad vibes at, for example, Houda Point’s Camel Rock, some background knowledge would be needed. First, the number of surfers in the water has increased exponentially over the years. Where once a handful of surfers reigned, now dozens upon dozens of wetsuit-encased bodies angle for waves. The reasons have mostly to do with improved equipment — lighter boards, warmer and more flexible wetsuits — and, some would argue, with the steady popularity of learn-to-surf classes. Second, with the increase in beginners and transplants, the heretofore established pecking order has devolved into a chaotic free-for-all. “I go out now and sometimes I don’t know a single person in the water — and they don’t know me!” might be heard from a 20-year veteran bemoaning the current state of things.

But back to Camel Rock. Until a few years ago, Camel Rock and its sister spot, Moonstone Beach, epitomized the romantic side of North Coast surfing: relatively easy fun in a spectacular natural setting, surrounded by surfers of varying age and ability who smiled easily and were, for the most part, happy to share a wave on occasion. But as more and more people showed up, stories revolving around bad manners and worse tempers became, like the occasional shark encounters, par for the course. The biggest sin in surfing is dropping in on someone else’s wave, but at Camel Rock, this breach in etiquette has become so commonplace that to surf there and not experience someone snaking into a wave in front of you is as surprising as getting through Eureka without hitting a single red light. “I was clearly going to make it,” a surfer we’ll call “Carl” related, “when this guy looked me right in the eyes and took off in front of me.” Because Carl rides an old beater board, he didn’t much care if his board hit the other guy’s.

Not everyone is as cavalier about using a board to make a point — some prefer to protect their property and demonstrate wave rage in a more directly physical manner. If a person feels threat to board, body or ego is imminent, responses might include yelling, hitting, tackling or, as a former Trinidad resident explained, “clotheslining the son-of-a-bitch as I’m going by.”

Right: A lone surfer manages to get a little breathing room while riding down the face of a wave.

While some view localism as a sort of antiquated pissing match, having experienced surfers calling the shots has some benefits. “If there’s not people in the line-up controlling things, it gets more hectic and dangerous for everyone,” Carl said. Of course, he added, “it sucks for people to be rude, too.” He’s been riding waves since he was 12 — he’s 31 now — and sees a split between “people who begin surfing in their mid-to-late 20s” and people who have been surfing their whole lives. On one side, he said, the latecomers bring big egos and can’t deal with being put in their place — “just because you own a surfboard and a wetsuit doesn’t mean you can surf” — and, on the other, surfers who feel their expertise entitles them to treat everyone else poorly. How does he deal with this mix at Camel Rock? “I try not to surf there a lot,” he shrugged.

As echoed as this sentiment is, Camel Rock remains crowded. The return of Humboldt State University students is already grumbled about. So much for the peaceful state of mind surfing is supposed to encourage.

But all hope is not lost. The swell might pick up, but emotions don’t have to.

Listen, if you’re new in town, be respectful. If you’re new to surfing, be doubly so. Pay attention to the line-up. Beginners, stay out of the way. Go to Moonstone until you have a sense of what you’re doing. When paddling for a wave, look over your shoulder. If someone else is closer to the peak, either stop or be prepared to pull back if he or she catches it. (If you’re a guy, don’t assume a girl’s not going to catch the wave. That happens too often, but you don’t hear about it because most girls are too nice to cuss you out.) If you’re an experienced surfer, don’t make the beginner feel worse about kooking out, just accept the apology gracefully. If you find yourself in front of someone, direct your board over the back of the wave to get out of the way. Apologize immediately. Pay your dues, and one of these days, that guy in the Wildberries parking lot might actually smile when you ask him where to go.

Besides being the Scene Editor for the Arcata Eye and a DJ on KSLG, Jennifer Savage is a surfer, spoken word artist and a mom.