Michelle Shocked, plus devil 1/3 Cooper McBean, green haps, Zion I and The Grouch 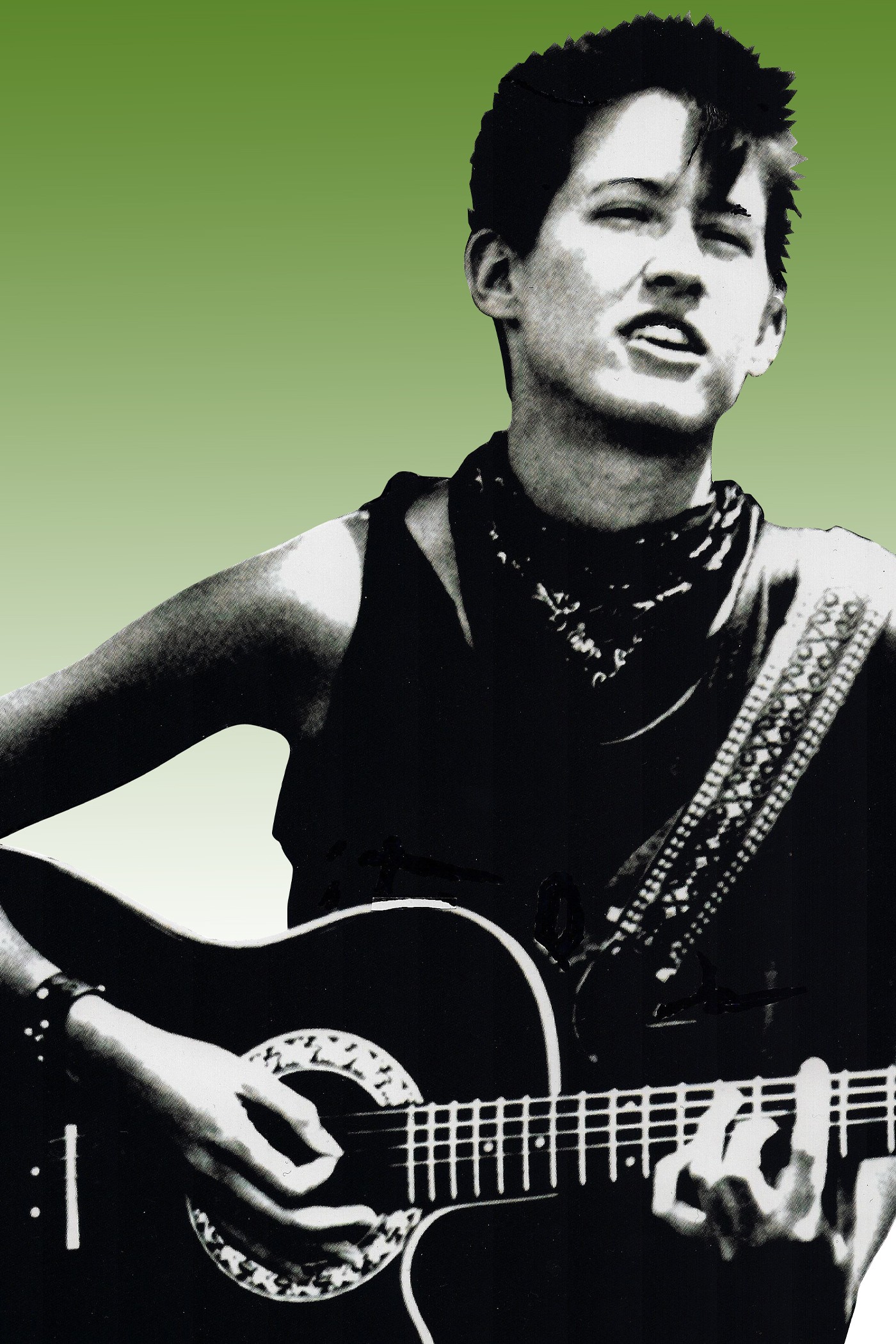 Crickets chirped as a young Michelle Shocked strummed her guitar and sang a few tunes around a mythic campfire at the Kerrville Folk Festival on a spring night 25 years ago. Before her set she'd been approached by a British journalist, Pete Lawrence. "He asked if he could record a few songs," Michelle recalled. "What I was totally unaware of was that he was in a long line of field recorders. He then went back and released it as a bootleg. I was blindly ignorant of that."

The lo-fi recording done on a Walkman came out in England as The Texas Campfire Tapes and, surprisingly, became a hit. Michelle eventually signed with Mercury, a major label.

"People want to project for me, 'Isn't it wonderful that he discovered you?' They don't understand the implication of that dynamic," she says looking back. "I've had to live with that legacy and work out the implications for myself, and work out how to tell the story my way."

Part of the story is the fact that her music was stolen from her. She's been fighting for musician's rights pretty much ever since. When she signed her recording contract she insisted on holding onto the rights to her music. Later, in 1993, when Mercury refused to release songs they didn't think would sell, she sued to escape the contract citing the 13th Amendment, the one that abolished slavery.

The music business has changed since then and not really for the better. "It's like the difference between traveling by an ocean-going sailing vessel and at warp speed on the Millennium Falcon in Star Wars," she says. Today it's piracy through file sharing that concerns her. "And it's been left not to the labels, but to the artists themselves to have to articulate why audiences do not want to undermine intellectual property in the long run. I'm telling you, it's a really momentous struggle. When you think about the relatively small media access I have to make my argument versus the tidal wave -- the tsunami of the zeitgeist out there."

When we spoke she was planning for what she's dubbed the Roadworks 2011 Campfire Girl Tour, which brings her to Humboldt Brews this Thursday, St. Patrick's Day. Her plans come with some apprehension. "I'm going out on this tour knowing that audiences are conditioned to expect the familiar and the favorites, so I'm reprising the Campfire Tapes for the 25th anniversary, and it's expected that I do a lot of songs from Short, Sharp Shocked, which they all know. But I'm also debuting five new, as-yet-unrecorded songs. The tragedy for me is, when I announce that I'm performing unrecorded songs, it almost becomes a coded invitation."

The new songs are from the "Indelible Woman" project, a collaboration with her "sweetheart," the painter David Willardson, honoring iconic women -- Audrey Hepburn, Georgia O'Keefe, Amelia Earhart, Anne Frank and Ella Fitzgerald so far -- with songs and paintings. Don't even think about recording one so you can upload it to YouTube -- she'll stop the show and chastise you for stealing from her. Seriously. "If I can hold fast, you know, Western civilization is pretty much built around the concept of intellectual property rights," she says. "Even though we're going through this bizarre technological blip, I think in the long run, if civilization is to sustain itself it will come back to a reasonable middle-ground where people understand there's a reason we honor creators rather than ripping them off. I just have to hold fast and hang tough while we go through this."

Six Rivers Brewery marks its 7th anniversary Thursday with a St. Paddy's party: Music starts at noon and runs until night on two stages with Six Rivs regulars Speak Easy Saints and The Grass Band, Seabury Gould (who plays some Celtic), plus The Strangled Darlings, an alt. Americana duo from Portland.

Bonus Productions celebrates the green of Thursday at the Jambalaya with reggae by Jamaican rootsman Perfect, who apparently is booked for this summer's Reggae on the River, plus Ras Indio from Belize.

Busy semi-Irish punks The Smashed Glass play Thursday at the Shanty, twice on Friday: at Li'l Red Lion with The Borstal Boys (from Washington) then at the Red Fox with Austin Alley, and finally, on Saturday, at Central Station.

Saturday night at the Red Fox, Wolf Navarro and Silent Giants (who have a new CD in the works) share a bill with The Malone and Music For Animals, an S.F. rock-pop quartet on their way to Portland.

Cooper McBean, the wild, tattooed banjo man from The Devil Makes Three, plays a Friday show at Couple Cups with his other band, Cooper McBean and the Vested Interests, a banjo/fiddle/drums trio with what he calls "a raucous and driving take on traditional music," ranging from honky-tonk to "psychedelic trance banjo."

Smokin' blues guitarist Laurie Morvan and her band Fire It Up! with some "red hot blues rock" Friday night at the Riverwood.

The revival of the Eureka Inn continues with two shows this weekend: Friday the College of Redwoods Big Band plays for dancers in the lobby under the direction of Bill Allison; beer and wine available in the Palm Lounge. Saturday Allison's back with the Redwood Jazz Voices, this time performing in the Palm Lounge itself.

In a parallel vein, pianist Darius Brotman's monthly jazz night at the Westhaven Center for the Arts is Friday. He'll be joined by his guitarist friend Duncan Burgess playing tunes by the late great Bill Evans.

Saturday at the Arcata Playhouse Portland "Celtic gypsy" folkies Daniel Rhiger and Rahmana Wiest, aka Sky in the Road, play guitars, bouzouki, harmonium, etc. and sing in sweet harmony with help from the Humboldt Sufi Choir in a concert benefiting the Area 1 Agency on Aging.

Acoustic guitarist singer/songwriter Catie Curtis plays at the Arcata Playhouse Sunday as part of the KHUM/Nutter Productions Upstage Live series, which, like the old Lost Coast Live concerts, includes an artist interview as part of the show. "Upstage Live is about brain catnip," says host/interviewer Mike Dronkers. "We want to get people thinking by bridging the gap between creator and audience." Guitarist/banjo picker Jenna Lindbo opens, then accompanies Curtis. It's all streamed live on KHUM and on the Net at KHUM.com.

At the start of "Healing of the Nation," a track on the new Zion I and The Grouch disc, Heroes in the Healing of the Nation, a voice whispers, "If you want to get something done, you have to do it yourself." The West Coast rhyming duo is full of DIY advice. "Frankenstein" speaks of a "modern day Babylon," a monster we created ourselves via information overload: "Spam from every direction until you don't know your reflection from your avatar. Are you who you say you are? Or just a sliver of who you know your s'posed to be?" asks The Grouch. "I know the answer already: Clear out the excess, get rid of the unnecessary. Now's the time y'all. Reclaim your souls."

The Heroes in the Healing of the Nation Tour hits Humboldt Brewery Wednesday, March 23. Opening acts include Blu and Jazz Mafia's Shotgun Wedding Quintet. At every stop they're helping local nation-healing heroes by giving a cut from advance online ticket sales to an activist group, in this case Humboldt Surfriders. Click through from zioniandthegrouch.com to make it happen. Then clear out your mental inbox.