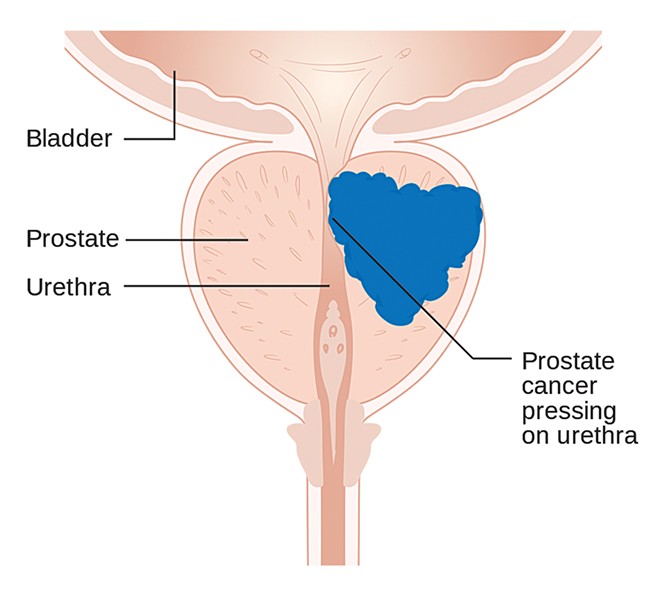 Cancer Research UK/Wikimedia Commons Two-thirds of men with prostate cancer have no symptoms. Those who do typically experience frequent urination, especially at night, due to the tumor pressing on the urethra.

Last week, we looked at some of the many reasons why the diagnosis and treatment of cancer are so difficult and controversial. A common way of illustrating the problem is the "turtle-bird-rabbit" analogy. Although it can equally well apply to breast cancer (the most common cancer in women), here I'll discuss it in relation to prostate cancer (the second most common in men, after lung cancer).

In a nutshell: About one man in seven will be diagnosed with prostate cancer; one in 39 will die of it; and 80 percent of us who reach age 80 have it. What the heck? Why aren't more men dying from prostate cancer if so many of us guys have it? To answer that graphically, urologist Dr. Frank Hinman divided newly diagnosed prostate cancer patients into one of three groups: turtles, birds and rabbits.

Turtles are patients with a very slow growing, ain't-going-anywhere tumor. So slow, in fact, that had they not been diagnosed, the outcome would be the same: They'd die of another cause, blissfully ignorant of the cancer cells in their prostate. The diagnosis, in this case, didn't help.

Birds are at the opposite end of the spectrum: Diagnosis came too late. Their prostate cancer cells — the birds — have already flown the coop. Their cancer has metastasized (spread to other organs) and is beyond treatment. In this case, diagnosis didn't help either.

Rabbits sit in the middle. A man with rabbit cancer cells may still be curable — doctors can catch those cells before they metastasize. Diagnosis, in this case, is useful.

So, screening makes total sense if you're a rabbit but won't help if you're a turtle or bird. No one wants to go through the trauma and expense of unnecessary surgery, but this is what happens when doctors operate on either a turtle or a bird. If you're being treated, both you and your oncologists want to believe you're a rabbit and that the procedure will save your life.

It's called the "hypothetical rabbit problem" because the rabbit may not exist. Most of the time, doctors are either operating unnecessarily on turtles (whose cancer would never have been a problem) or uselessly on birds (whose surgery is futile, too little and too late). How to know which, while the patient is alive and treatable? (Autopsies give the final word.) The best oncologists can do is to assign probabilities based on the patient's age, health, medical history, family history, etc. This method, apparently, isn't much better than a crapshoot when pitted against an enemy that's devious, stealthy, fast-moving and — in the case of turtles — may best be left alone.

We'll never totally eliminate cancer from our lives — that's the price we pay as multicellular organisms. And chemotherapy and radiation treatments actually increase the rate of mutation, with potentially deadly results. Instead of thinking of our relationship with cancer as a winnable war against an enemy that can be defeated, research is now starting to focus on living with, but managing the foe, as has been done with HIV.

We must also accept the fact that cancer isn't a "mechanical" disease like stroke and heart attack, which are likely to be virtually curable in the future. Cancer is here to stay and will — if you survive everything else and live to a ripe old age — get you in the end.

Barry Evans (barryevans9@yahoo.com) loves turtles, gets on OK with rabbits and wants to avoid birds.