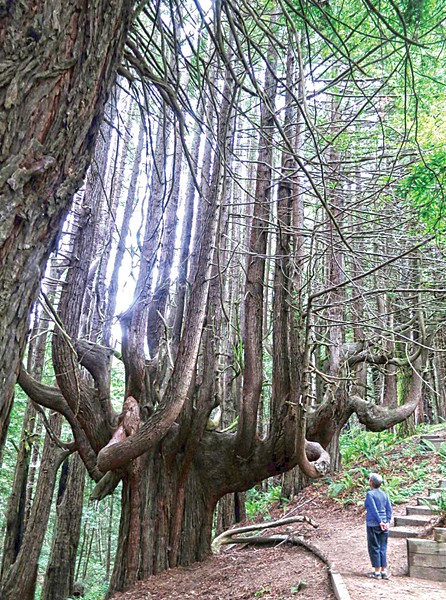 Ten miles south of the Humboldt County line, the insanely steep cliffs of the coastal range mellow into Shady Dell, a half-mile-wide oasis set back from Usal Beach. Unless you're a hardy backpacker heading south through the 7,800-acre Sinkyone Wilderness State Park, you're probably going to reach Usal from U.S. Highway 1, on a steep (up and down, both ways) 6-mile dirt road. If you're an old hand at this, you might notice a new sign near the top of the hill announcing the south end of the 2.3-mile-long Peter Douglas Trail.

You're probably best off driving on down the hill to Shady Dell, where you'll find the north end of the trail 30 yards south of the Usal Creek bridge. That's because (1) you get to go downhill on your return and (2) you start off through the 500-year-old candelabra grove. Candelabra redwood trees look much as they sound: multiple prongs of trunks formed when coastal gales blew the tops of the trees off, bending new growth, resulting in an uncanny resemblance to a candelabra.

The grove rises more than 200 feet in a quarter mile, necessitating nearly 300 steps to guide visitors from sea level up to an old logging road grade. The hand-carved steps are filled with gravel that had to be passed in a bucket line — too steep even for a wheelbarrow. For that, we can thank the California Conservation Corps. The trees themselves were saved from loggers because what mill wants deformed trees with bent boughs?

The easy grade of the mossy logging road ends at a bridge that crosses a tributary of Usal Creek. The new redwood bridge was built by Fort Bragg native and general contractor John Koski. The sign next to it makes the unlikely claim that salmon once swam so thick here that one could walk across the stream on their backs. Beyond the bridge the grade rises, crossing and re-crossing Usal Road with lovely (but frequently fog-limited) views of the ocean.

Impetus for constructing the new trail came in 2011, when the venerable Save the Redwoods League — one of the trail partners — bought nearly 1,000 acres of first and second growth from a logging company. Within a year, Louisa Morris of the Mendocino Land Trust — another partner — was mapping the area and designing a new trail. (The third partner is the California Coastal Conservancy.) After waiting two years for the permitting process to be completed, four months of construction work began last year. It was dedicated in May of this year. The trail is named for Peter Douglas (1942-2012), longtime director of the California Coastal Commission and one of the authors of California's 1976 Coastal Act.

I heartily recommend this short-but-impressive trail for its delicious variety of first and second growth coastal forests, sweeping ocean views and open cliff-tops. Drive south on U.S. Highway 101, and turn onto U.S. Highway 1 at Leggett. Watch for bikes on the steep and windy road until you reach the Usal Road turn-off on the right (mile marker 90.88). We made the 6-mile drive from U.S. Highway 1 to Usal Beach in our VW van, but it was dry and the surface had been recently graded; four-wheel drive would have been easier. There's a scattered campsite back from the beach, and a resident herd of Roosevelt elk — you'll be unlucky if you don't encounter some of the antlered beasts. Just keep your distance.