He still ended up getting sugar

"The coaches gave out Gummi worms, Skittles and candy bars for rewards."

When Tammy Rae Scott dropped off her 10-year-old son, Misha, at the Lumberjack basketball day camp for second- through fifth-graders last month at Humboldt State University, it was a frenzied, confusing scene. She asked several coaches for directions. Register Misha here, they told her. Buy his jersey there. Oh, and be sure to sign up for concessions over there.

Concessions are snacks. Parents pay a deposit to cover them so the kids don't have to run around with money in their pockets. Lunch, on the other hand, is included in the $289 camp fee.

She registered her son. She bought a jersey -- which he loves and wants to sleep in all the time now, she said. Then she checked out that concessions stand.

"I looked at it and I said, 'I will pack him a snack.' It's all Reeses peanut butter cups, candy bars, Gatorade -- it's all sugar," she said.

The next day, Scott handed her son a lunchbox containing a Clif bar, water bottle, blueberries, an apple and an organic fruit leather. He stuffed the Clif bar in his pocket and handed the rest back to her.

"You want to fit in," she said. "And if you're bringing mom's food in ... well, the pressure's definitely on to assimilate. That's why, bottom line, this is so appalling. We've got Type 2 diabetes. We're the fattest people on the planet. Access for dental care up here is difficult for kids. And all top athletes eat really well to keep their bodies in shape."

Misha didn't complain, though. "They're used to my lectures," Scott said. "My kids call my food 'hippie food.' Once in a while we let them have a candy bar or a Coke. But very rarely." 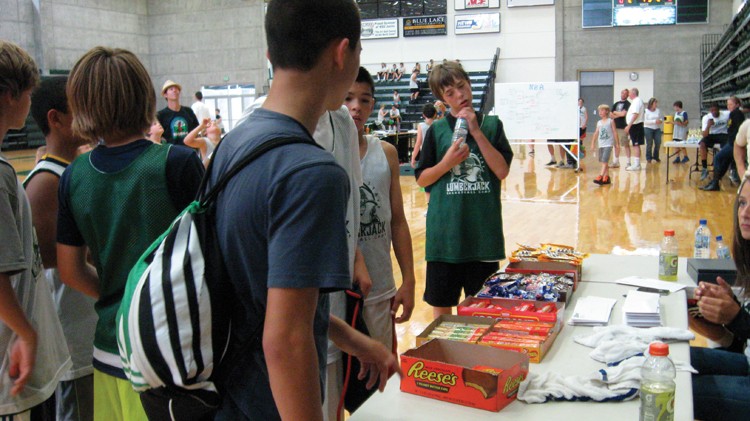 He still ended up getting sugar -- the coaches gave out Gummi worms, Skittles and candy bars for rewards. Still bothered a week after her son's camp ended, she phoned the Journal to complain. Why couldn't they keep some candy, but add in some apples and blueberries? Why couldn't the coaches set a better example?

Hardy Asprilla, assistant coach of HSU men's basketball and director of the camp, was surprised by the complaint. He didn't hesitate to answer in that calm, confident, emphatic voice coaches use to explain strategy and rules.

"No. 1, we've got to remember that they're kids," he said. "And the No. 1 thing that kids want to do is have fun at the basketball camp. If it's not fun, they're not going to come back. And they're kids -- kids like candy. For us, our No. 1 priority is safety. We want to make sure that we have the least amount of injuries as possible. The third item here, is, teaching the fundamentals and basics of basketball. In a nutshell, that's our philosophy: safety, fun, teach the game."

Why, he wondered, hadn't Scott talked to him? "You go to the source and try to take care of the problem," he said. "I take care of a lot of problems during the week and I could have looked at it."

But is that sugary stuff bad, and not representative of how top athletes eat?

"This is basketball camp, not nutrition camp," Asprilla said. "It's one week out of the whole year. To be honest with you, I didn't even think about it; we've been doing camp 20 years and this is the first time that we heard a parent complain about the candy."

His university players, on tight student budgets, probably do gobble burgers, candy and pizza on the cheap, he said. Then they burn it off in practice. "These kids are 20 years old, they're gifted athletes, they're in great shape," he said. "Yes, eating healthy obviously is a big part of life. If you don't have the vitality to function, to go to work, to play, then you've got a problem. We talk about that with our athletes."

The camp kids also burn a lot of calories, he said, all day long.

It's a great camp, she said, and she wants her son to do it again. She said maybe she will send a letter to the head coach, asking him for more nutritious snacks.