Art is a battlefield at Godwit Days 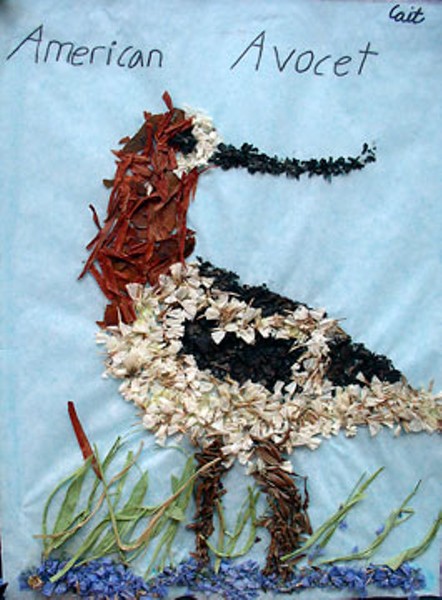 It's easy to forget in this modern time full of bewildering and exotic grist for the artistic mill, that it was wild nature that first compelled human beings to put pen to paper. The wonder that we feel watching the birds in the sky or the colors of a sunset have inspired the artist in us from the time of the Lascaux cave paintings to the present.

And in this present day we are well into spring, the bird migrations are in full swing, and with the birds come festivals to celebrate them. It should come as no surprise, then, that art plays an important part

The City of Arcata hosts the annual Godwit Days from April 17-23. Of course, the main attraction is looking for birds, and the list of field trips and birding tours available is dizzying. But a natural response to looking at birds is also drawing or painting.

For the past four years, the Student Bird Art Contest has been part of the Godwit Days festival. Modeled after a similar contest held during Crescent City's Aleutian Goose Festival, this one gives students a choice of 40 birds to choose from for their drawings, paintings or collages. The contest is open to children ages 5-18, and all entries will be up in the Arcata Community Center throughout the festival.

Winners of the contest will be announced on Friday, April 18, at 7 p.m. immediately following the free Godwit Days Opening Reception at the Arcata Community Center, and cash prizes and honorable mention certificates will be awarded.

It is at this point that I begin to chafe. A musician friend of mine once said, when I asked him why he wasn't interested in the Grammy Awards, "Music isn't a contest." I feel the same way about art. Those who engage in it are winners. Those who haven't experienced the soul satisfying and mind-expanding practice of doing something that excites them, and doing it to the best of their ability, have missed a significant part of life (but it's never too late to begin).

And so, I am pleased that an art event is a part of this festival celebrating nature, and I am glad that so many children are introduced to both the arts and the birds, but I do wish it weren't a contest. Recognizing some as winners is terrific for the winners, but what about all the others? Who is it that pronounces a handful of pieces as better than the rest, and on what do they base their decisions?

I'm not at all questioning the qualifications of the judges or the validity of their decisions. Instead I question why we need to rank the art works at all. I'm sure that one argument for a contest would be that the cash prizes may motivate more children to join in. Of course, it remains to be seen if that is true or not, as the first four years have included the competitive element. Personally, I'd rather see kids involved in art because it's a rewarding experience in itself, rather than luring them with cash. But let me get off of my soapbox. I've made my case against the contest, and it is my hope that the sponsors may consider the possibility of eliminating the awards and celebrating each and every artist. Now I'll move on to other things.

There is no doubt that it's a great opportunity for kids to make and display their art, and for us big kids to take a look at the world through their eyes. And the hope is that it opens up a relationship that will stay with them for life. Sue Leskiw, who was on the board of the Friends of the Arcata Marsh and the Redwood Region Audubon Society at the time she first introduced the idea for Godwit Days, told me the story of Lauren Tompkins, who she sees as the poster child for this goal.

Lauren was 12 years old when she won third prize for her Great Blue Heron in the art contest. Not long after, Sue's husband Tom told her that he'd been getting reports from a very young sounding voice on the Arcata Birdbox, a voicemail system that allows observers to report their avian sightings and interested parties to retrieve messages about unusual birds that have been seen in the area. Sue recognized the name, and realized that from the contest winner had been born an avid birder (one wonders, at this point, if Lauren's interest would have so blossomed had there been no prizes). Lauren was invited to join in the Audubon's Christmas Bird Counts in December, and her young ears picked up bird calls that experienced birders missed.

Lauren and her mother became regulars at the Saturday Arcata Marsh field trips, and before long, Lauren was leading the walks. Her list of achievements in the birding world goes on, giving talks to elementary school students, winning a scholarship to attend a Birding Camp, and birding with the keynote speaker of the 2006 Godwit Days festival, John Fitzpatrick, director of the Cornell Lab of Ornithology (which she is considering attending when she comes of college age). And according to Sue, it all started with that first entry in the 2004 art contest.

It's an impressive story, but of course an unusual one. You needn't be discouraged if your child isn't off to Cornell with a mile-long list of bird sightings under their belt after participating in the contest. If they have a great time, are thrilled to see their work displayed and have gained new insight into the world by looking at a bird carefully enough to render it, then they have won the greatest gift this contest has to offer.

And if you disagree with me about contests, as I'm sure many of you do, and even if you agree, you will be pleased to know that copies of the winning artworks will be on display at the Arcata Marsh Interpretive Center through the month of May.

As I said, the Godwit Days festival takes place from April 17-23. You can find a complete list of events and register at their website, www.godwitdays.com. The Arcata Community Center will be abuzz with many of the free activities through the weekend, and there you can see all of the student entries, as well as trying your own hand at bird art with the Family Nature Craft Activities session on Saturday between 11 a.m. and 2 p.m. There will also be some live birds there who will hold a pose for artists for a handful of birdseed.