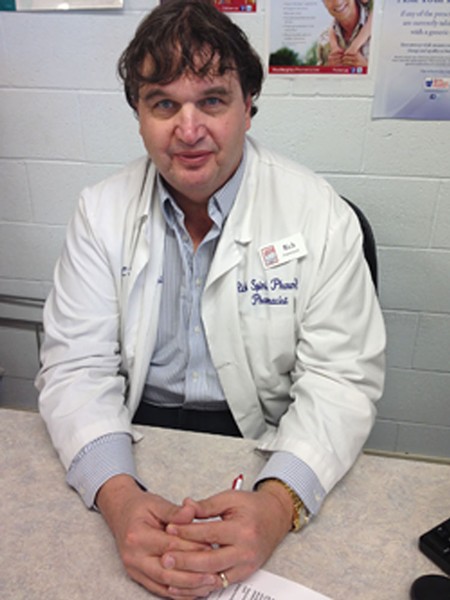 Earlier this month, an outfit called Coast2Coast Rx announced that Humboldt County residents "saved over $800,000 on prescription medications" in a two-year period using the free discount prescription card issued by the company and endorsed by Humboldt County. To boot, for every prescription filled with the discount card, the county received a small royalty.

Fantastic! Who wouldn't be pleased?

Apparently, nearly all of the independent pharmacies listed on the Coast2Coast/Humboldt County website as "participants" in the program. Some refuse the card altogether, and others accept it but try to divert customers into using their own in-house discounts instead, according to interviews conducted by the Journal over the past couple of weeks.

Seven local independent pharmacies are listed as participants in the Coast2Coast Rx discount program. Of them, only two say they'll take the card. Barnes Family Drug in Arcata, Lima's (two branches, in McKinleyville and Eureka) and Cloney's Red Cross in downtown Eureka don't accept the card any more. Palco Pharmacy in Scotia doesn't take any discount cards. Cloney's co-owner Rich Spini said he'll take the card at his Harrison branch if someone brings it in -- which is rare -- but prefers not to. Robert Johnson, owner of Green's in Fortuna, said the same.

So why should we care whether this card is a good deal or not? Well, for one thing, Humboldt County has been promoting it, and gets a cut when it's used. Supervisor Mark Lovelace pushed for the county's adoption of the card in 2010 because of the savings potential for residents using it, especially those with chronic conditions. The royalty, he said, was not the driving force behind the county's choice. "Someone I talked to just today said her father is on a number of medications and the program has been very good to them," Lovelace said recently.

More than one-third of California's counties -- 19 out of the 58 -- back the Coast2Coast RX card, according to the California State Association of Counties' Finance Corp. which helps counties with bulk buying, investments and other financial services. The card brings the counties a little more money, and another big chunk of cash flows to the association's finance corporation -- right now it's averaging around $12,000 a month, said Executive Director Nancy Parrish, noting the figure changes as usage rises or falls.

Humboldt started out getting 50 cents per prescription filled with the Coast2Coast card, and now gets $1.25 per prescription. In the first two years of the program, the county received $16,389 in royalties, said county Administrative Services Manager Karen Clower. The county puts that money toward medical care for poor jail inmates, which costs the county around $2.8 million a year.

And who exactly is ponying up the $16,000-plus that Humboldt has taken in? The pharmacies -- and the independent pharmacists say the Coast2Coast program cuts too deeply into their profit margin.

Here's how the card works: A customer brings a prescription into the pharmacy and hands it over with his Coast2Coast Rx card. The technician enters the information from both into a computer system that communicates with the prescription benefits manager -- in this case WellDyneRx. WellDyneRx spits back the discounted price (arrived at through negotiations with drug manufacturers, the chains and the buying services that represent the independent pharmacies). The price includes a dispensing fee for the pharmacist. The pharmacist collects the money from the customer. Later, WellDyne bills the pharmacist for a Coast2Coast administrative fee, which in Humboldt is $4.25 per prescription (out of which comes the $1.25 for Humboldt County). The $4.25 is considered a subtraction from the dispensing fee. So the pharmacist absorbs the discounts and forfeits some of his dispensing fee.

"Basically I started losing money," said Craig Barnes, owner of Barnes Family Drug. He said he liked the idea, initially, that the customer got a discount and the county got a little something too -- until he realized it all came out of his own pocket.

Rich Spini, at Cloney's, also embraced the discount card at first, considering it a goodwill gesture. But he, too, dislikes paying a middle person. "Why don't the drug companies have to pay the fee?" he asked. "The drug companies don't give the drugs to us at a discount." Offer too many discounts, he said, and he might not be able to keep providing as many services for his customers and full health-care benefits for employees. "We're on call for nursing homes. We're on call for Hospice. We have four full-time delivery drivers. We have 25 to 30 employees at the two locations." Spini said Cloney's offers its own, in-house discount card now, if people want one -- and the store doesn't have to pay a cut to the county or anyone else.

Robert Johnson, at Green's, said fewer than 2 percent of his customers use the Coast2Coast card. He offers a discount card from a competing company. Johnson said the savings touted by Coast2Coast are inflated. "Most of the savings are going to be 5 to 20 percent," said Johnson. "Although it can really help on generic drugs, where I've seen savings up to 25 percent. But that's the problem -- Coast2Coast, they advertise up to 75 percent savings. Not true."

On top of the independent pharmacists' resistance, virtually all of the chains listed on the county/Coast2Coast site -- with the exception of Rite Aid -- say they don't see many of the cards. At least one, CVS, doesn't take the card at all, instead offering customers CVS discounts, a pharmacy technician said. Mike Cent, manager of Costco's pharmacy, said he doesn't ever see the Coast2Coast card; his clientele tends to have insurance. "If we see a discount card at all, it's usually the AAA discount," he said. At Target, pharmacy technician Vanessa Carmichael said that of the about 2,400-plus scripts her team fills per month, maybe one or two are for people using the Coast2Coast Rx card. Target offers some $4 meds, plus its own free discount card which covers most generics, she said. (Another pharmacy on the list, incidentally -- the McKinleyville USCG (Coast Guard) Pharmacy -- shouldn't be there because its military clients don't need discounts; they already get their meds for free.)

Meanwhile, Coast2Coast reports show that usage of the card in Humboldt has steadily dropped since March 2011, when a high of 1,324 scripts were filled, to just 577 scripts filled this April. Is that because people are finding better discounts through other means? Or because the pharmacists are opting out of honoring the card?

Marty Dettelbach, chief marketing officer for Financial Marketing Concepts, the company that runs Coast2Coast Rx, seemed unable to believe independent pharmacists were shunning the card. "We have several independents that are doing great in Humboldt," he said. But he is forbidden by contract to reveal their names. "Independents need to understand they're driving business with the card. The ones who realize that work with us."

That's the idea behind most discount cards, of course -- to drive business to the store that honors or offers it. The Coast2Coast Rx card is aimed at people who have no insurance, inadequate insurance, a high deductible or are caught in the Medicare Part D donut hole. It covers more than 60,000 drugs, and recently more discounts were added including for dental, vision, veterinary, hearing, lab and imaging services. Dettelbach said the discounts, nationwide, have averaged 55 percent.

Coast2Coast bases its savings claims on a comparison between its price and what a drug would have cost without any discount or any insurance. But many people can tap into other options, so there's no way to tell how much Coast2Coast customers really saved if they had instead comparison shopped.

By all means, Dettelbach said, people should shop around among pharmacies to see who's offering the best price for a particular drug. Just because one drug is cheaper at, say, Target, that doesn't mean all drugs are cheaper there.