What will California do to win over vaccine skeptics?

By Ben Christopher and CalMatters 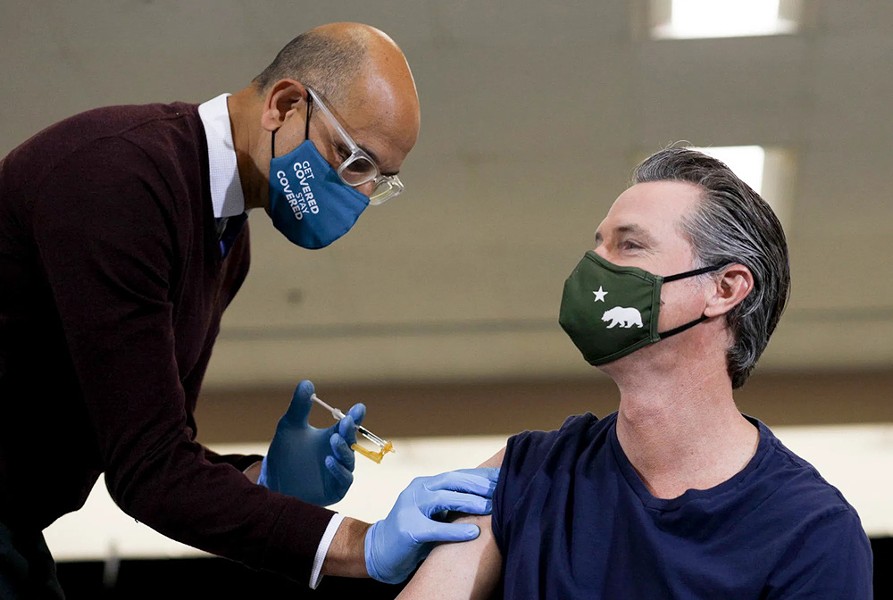 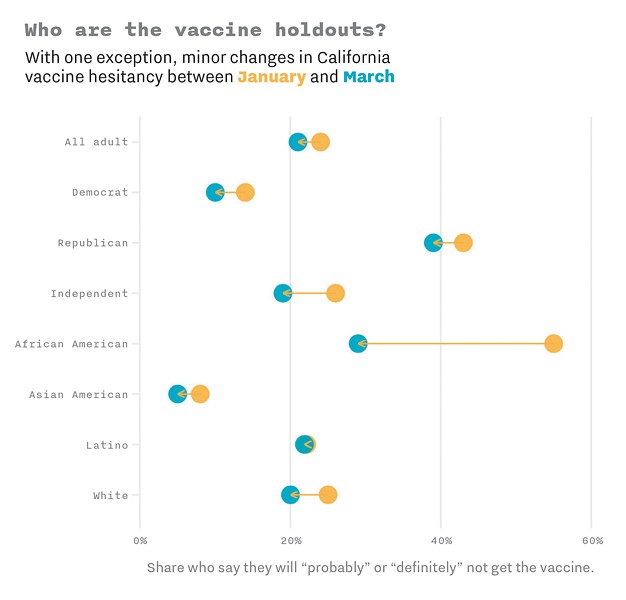 Toward the end of Health Officer Ian Hoffman’s April 6 briefing to the Humboldt County Board of Supervisors, First District Supervisor Rex Bohn asked a question. Nationally, he noted, 25 to 30 percent of those eligible are declining the COVID-19 vaccine. He asked Hoffman whether that trend has held locally.

“I think what I can say about the demand for vaccine in Humboldt is it has continued to be extraordinarily high,” Hoffman answered before quickly noting there have been “many more” people eligible to receive the vaccine locally than there have been available doses, making it hard to figure what percentage of the local population may decline a dose if offered one.

But the answer to that question may prove crucial in determining the pandemic’s course — both locally and nationally — moving forward. With a wide variety of COVID-19 variants popping up as the virus continues to spread, some health officials fear it may only be a matter of time before one appears that eludes the vaccines’ protections. In his prepared remarks to the board, Hoffman described the situation as a race between the mutating virus and vaccination efforts, which experts say must reach 70 to 85 percent of the population to achieve a level of herd immunity that would contain the virus and its variants.

Historically, there have been pockets of Humboldt County with disproportionate levels of vaccine hesitancy. When a new state law came into effect a handful of years ago, doing away with a personal belief vaccination exemption and requiring just about every child in California be fully vaccinated for 10 communicable diseases before attending school, it created havoc in some schools in Humboldt County, which at the time ranked 52nd of the state’s 58 counties in vaccination rates for incoming kindergarteners with roughly 10 percent of students entering school with a personal belief exemption the prior school year.

Hoffman described the vaccine effort as “our ticket out of this long, dark tunnel” and the thing that will return local residents to a “normal place.” And he urged local residents to be community minded when considering the vaccine, noting that every dose administered brings the entire county closer to a place of collective safety and the return of so much that has been lost over the past 13 months.

“Do your part: Get a vaccine when it’s your turn,” he said.

Beginning April 1, all Californians 50 and older became eligible to get their coveted COVID-19 vaccine — including one politically imperiled 53-year-old governor.

Gov. Gavin Newsom celebrated this latest benchmark by getting a well-publicized jab himself, thus marking the beginning of the end of what has been a particularly thorny political challenge for the administration: How to make sure the millions of Californians eager to get a vaccine are able to get one.

Now it's on to the next challenge: How to vaccinate the millions of Californians who aren't quite so eager.

A survey released recently by the Public Policy Institute of California found that 14 percent of adult respondents said they would "definitely not get the vaccine." Another 7 percent said they "probably" wouldn't. That suggests that one in five Californians will need, at the very least, some extra convincing.

With new more virulent and lethal mutations of the novel coronavirus now rippling through the unvaccinated population, public health experts say convincing those "vaccine hesitant" holdouts is an urgent concern — not just for the unvaccinated, but for everyone.

"This is like a shapeshifter of a virus, so if we don't do it now, then we may have to vaccinate everybody else again if some new super variant comes on board," said Peter Chin-Hong, an infectious disease physician at the University of California San Francisco School of Medicine.

In the early days of the pandemic, epidemiologists estimated that roughly 70 percent of the population would need to acquire some degree of immunity to the virus — either by getting sick and developing antibodies or by receiving a vaccine — to slow transmission to a containable rate.

The new variants raise that figure to reach "herd immunity" to about 85 percent, said Chin-Hong.

But many state lawmakers and public health officials say it's still too early to consider resorting to mandates or other coercive measures that have already proven contentious to goad people to wear masks during the pandemic.

"Rather than coming out with a hammer right away," said North Coast Assemblymember Jim Wood, a Santa Rosa Democrat who leads the Assembly health committee, the state should use the next few months to "identify what the major barriers are, educate people, provide information, reassurance, contact the people that have the most influence ... and see where we end up."

A "continuum of coercion"

Wood and his colleagues have good reason to tread carefully. In 2019, the acrimonious debate over a bill making it more difficult for parents to exempt their school-aged children from routine vaccine requirements ended with a protester literally raining blood onto the floor of the state Senate. During the pandemic, irate anti-vaccine protesters have been regular fixtures at legislative hearings. In January, two activists issued warnings to lawmakers — particularly sinister in the days following the storming of the U.S. Capitol — that a vaccine mandate of any kind would lead to armed political violence.

There are no state plans to mandate universal vaccination. In California and elsewhere, some health care workers and first responders, who were given priority for shots, declined the opportunity. In a March report by the Kaiser Family Foundation and the Washington Post, only 52 percent of health care workers said they had received a shot.

In theory, California and other state governments have "broad power to regulate in the public health, even if that means limiting individual rights," said Dorit Reiss, law professor at the University of California Hastings College of Law. But in practice, states have been wary of exerting that power.

On the "continuum of coercion" that ranges from mandatory public health education to fines for non-vaccination to mandatory shots, "we don't really use those last two in the United States," said Reiss.

Waiting for the dominos to fall

On April 15, all Californians age 16 and older are scheduled to become eligible to get their shots. With supply still the limiting factor, Darrel Ng, a spokesperson for the California Department of Public Health, said it will be a couple more months before everyone who wants a vaccine actually gets one. As of today, more than 19.8 million doses had been administered and nearly 7.4 million of 40 million Californians had been fully vaccinated, according to the department.

"Given where we are in the supply cycle, we are working to help people who want to get the vaccine and to convince the next people who perhaps are only one step away through additional access and information," Ng said.

That means partnering with community groups that can help the tech-unsavvy book their appointments and peppering vaccine-hesitant or out-of-the-loop Californians with ads.

Newsom got his shot April 1 at the Baldwin Hills Crenshaw Plaza mall in the historically Black south Los Angeles neighborhood. He said he hopes community members who get their vaccine there will serve as "ambassadors" for vaccination: They will "go back home, talk to friends and family and say, 'I just got my vaccine, you should do the same thing.'"

As more vaccine holdouts see their friends, family members and neighbors get the shot and enjoy a return to a nearly-normal life, Ng said there is likely to be a "domino effect."

But those last few dominos could prove difficult to topple.

Mark Baldassare, president of the Public Policy Institute of California, which conducted the poll released last week, said the vaccine-reluctant bloc hasn't diminished much since January when a similar survey put the number at 24 percent.

"There seems to be a hard core of 20 percent," he said. Despite early concerns that Black Americans would be particularly reluctant to be vaccinated, given the long history of undertreatment and mistreatment at the hands of health care professionals, the share of Black respondents "definitely" opposed to getting the vaccine fell significantly over the last two months — from 35 percent to 17 percent as public information campaigns ramped up.

Instead, the most striking and unmoving predictor of vaccine skepticism was political affiliation. While 26 percent of Republicans said they "definitely" will not get vaccinated, only 13 percent of independents and 5 percent of Democrats said they definitely won't.

Wood said he's optimistic that with enough time, enough information and enough encouragement, most people will come around. "I would hope that people that maybe have a political reason for not doing this would show a little bit more compassion for their fellow man," he said.

Baldassare said he drew a different conclusion from the new numbers: "Don't take for granted that as more vaccine becomes available that people will just come to accept it."

Last week, the Washington Post reported that the White House is considering a program to give those reluctant to get the shot an extra nudge. "Vaccine passports" would offer proof of inoculation for international travelers, but also give companies and public institutions the ability to mandate vaccination among their employees or customers. The program is similar to Israel's "green pass" program, which has allowed vaccinated people to enjoy concerts, sporting events and other perks of pre-pandemic life.

That news prompted a backlash on the political right.

Republican U.S. Rep. Marjorie Taylor Greene of Georgia, who was stripped of her committee assignments over her past peddling of far-right conspiracy theories, had a more Biblical denunciation, asking in a social media post whether a vaccine passport was "something like Biden's mark of the beast."

There's also some legal uncertainty over the three COVID vaccines, all of which were fast-tracked for regulatory approval.

Earlier this month, seven Los Angeles Unified School District workers, including four teachers, sued the district over a requirement that all district employees be vaccinated. The legal argument hinges on whether a vaccine authorized only for emergency use can be required as a condition of employment. This follows a similar case brought by a county jail officer in southern New Mexico.

That uncertainty is discouraging some of California's other public institutions from issuing their own mandates. At a meeting of the University of California regents in March, Vice President Carrie Byington said the emergency-use authorization status of the three vaccines "would make it very difficult" for the U.C. to follow the lead of New Jersey's Rutgers University and mandate vaccines for all students.

With politicians and public officials hesitant to act, the private sector seems to be taking the lead on much of the nudging, with carrots favored over sticks.

California businesses are "all looking at how they can reopen safely, protect their employees and their customers," said Rob Lapsley, president of the California Business Roundtable, a coalition of large businesses. But at the moment, he said, there's no coordinated "discussion about it being mandatory or a requirement."

Kroger's, Trader Joe's, Target and Amtrak are among the major employers who have recently announced bonus pay, paid leave and other financial incentives for their employees to get vaccinated.

And then there's Krispy Kreme, which is offering neither carrot nor stick, but a donut. Dozens of them. The company recently announced  it would offer a free donut "anytime, any day, every day for the rest of the year" to all customers who bring in their vaccination cards.