Any way you look at it, the Carson Block is big. Big in stature, long in history, iconic in design and an important part of Eureka's economy.

With the massive rehabilitation of the building nearing the end of its first phase (see Linda Stansberry's cover story), the Journal wanted to get a sense of the years-long project's reverberating economic impacts. To do that, we talked with Humboldt State University economics professor Steven Hackett, who shared with us his formula for determining the multiplying effects on every dollar spent on infrastructure projects like this. 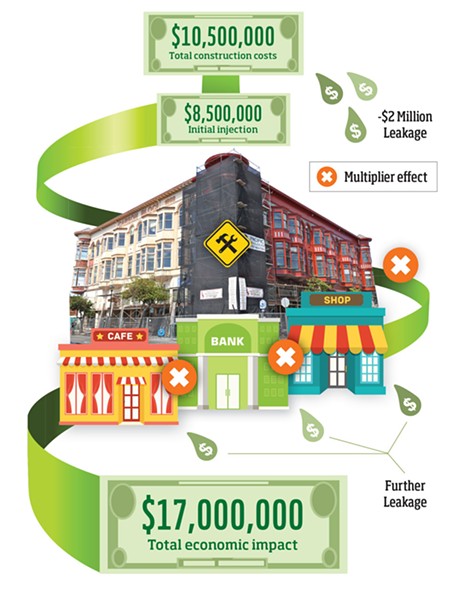 The basic premise is that every time there's an injection into the local economy, the new dollars circulate several times, losing a bit of spending power each time but expanding on their initial impact. Hackett, in his 2011 textbook, defines income injections as revenue coming from outside sources — whether it's the export of locally created goods, tourism, or state or federal governmental expenditures.

In the case of the Carson Block, Northern California Indian Development Council cobbled together a variety of funding streams and paid Pacific Builders of Arcata about $10.5 million to restore the building (not the total project cost, but a vast majority of the construction spending). But it's difficult to determine how much of that represents a true income injection. Hackett said the the $6.5 million the NCIDC received in tax credits and a California Cultural and Historical Endowment grant probably represent a true injection. But it's possible to argue that an additional $5 million in grants and loans from the California community development block grant that the NCIDC received could have gone to other local projects. That displacement wouldn't represent a true income injection.

Pacific Builders co-owner Nick Lucchesi told the Journal his company sub-contracted much of the specialty work, and ended up paying businesses from outside of Humboldt County about $2 million. Under Hackett's model, this represents "leakage" — money that doesn't continue to circulate in the local economy. Those outside contractors take the vast majority of their income back to their respective communities (an income injection of their own). While there is still some local spending from outside contractors (on meals, supplies, hotels, etc.), there's also outside spending from local contractors (tools and supplies from elsewhere), Hackett said, and for this illustration, the Journal assumed those balanced each other out.

The money paid to local building companies will re-circulate as the employees of those companies spend their wages on groceries, health care, mortgages, professional services — and anything else you can imagine. Those grocery store clerks, doctors, bankers, etc., spend that money on similar things, multiplying the effect of the initial dollar again, and again, and again.

That power of that original dollar diminishes with each round of spending. The grocery store where that construction worker bought a sandwich may have imported the bread — an example of leakage. The clerk whose wages were partly paid by the sale of that sandwich bought a book on Amazon.com — more leakage.

Narrow economies, like Trinity County for example, suffer from much more leakage than economically diverse regions, like the Bay Area, which has a broad array of locally sourced goods and services. A regional economic center like Eureka, Hackett said, would fall somewhere in the middle.

Assuming a 50-percent per-round leakage rate, and that the money NCIDC raised for the Carson Block project was a true economic injection, the restoration of the historic building represents a total economic impact of $17 million — double the amount spent directly on local construction services.

On the low end — assuming that CDBG funding would have gone to other local projects, and projecting a slightly higher leakage rate — the Carson Block project represents a $9.3 million dollar economic impact, by Journal calculations.

While it's impossible to accurately trace the trajectory of money spent on the project, it's clear that the ramifications go beyond the corner of Eureka's Third and F streets, beyond the nearby coffee shops and retailers.

A project like the Carson Block, Lucchesi said, has a "huge impact on the community."