Caught in the Web

The Spidey reboot has heart, unlike Oliver Stone or Woody Allen’s latest 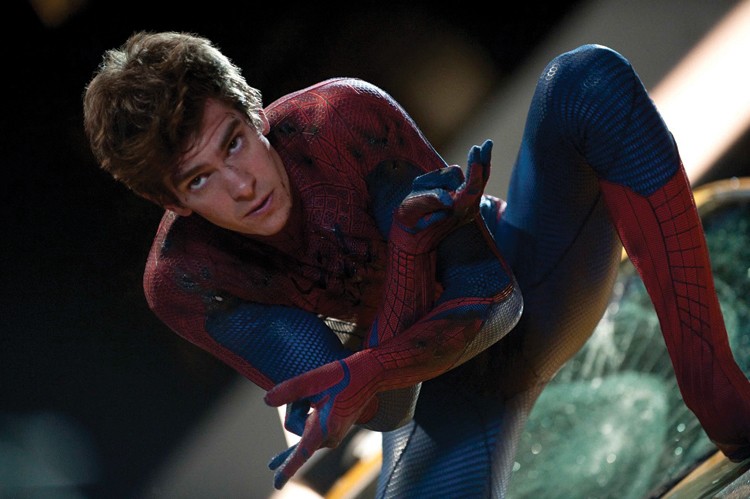 THE AMAZING SPIDER-MAN. I think Sam Raimi is a fine director, and I'd re-watch a number of his movies any day of the week. However, I don't feel any real connection to his Spiderman trilogy. The movies were fun, if unremarkable, entertainment. They were also released pretty recently, so I was mildly surprised (not to say upset) when talk of the reboot started. As it turns out, this new one is smart and strong enough to just about erase any memory of the previous three.

When the first teaser trailers hit theaters, I was pretty skeptical: They looked like videogame footage and seemed to contain all of the movie's action sequences. But that was a clever marketing gambit: Nearly everything in those trailers comes from the final third of the movie, so we get the pleasant surprise of two acts of solid character development and subtle visual storytelling. By the time the last, action-packed section rolled around, I was totally involved.

Director Marc Webb builds the story painstakingly, first introducing Peter Parker as a smart, bullied high-school senior. Webb perfectly evokes the painful, all-encompassing dramas of teenage life, with help from a tremendous performance by Andrew Garfield. He plays Peter as a kid who may be a little lost, but who knows he's a person of strength and value. His peers don't recognize it, so he's trapped in the doldrums of late adolescence, trying to navigate an uncooperative world. When the fateful super-spider bites him and sets him on the path of hero-dom, there's an exhilarating catharsis. Peter doesn't have to submit anymore, and he revels in it. As he builds his Spidey skills, his enjoyment of this newfound strength and freedom comes through in the smart-assed, cocksure way Garfield delivers his lines.

Overall, The Amazing Spider-Man charms and satisfies thanks to Webb's light touch. He possesses the rare ability to tell a story visually, with frames full of details, but also hold onto the overarching narrative. He obviously has a way with actors, as well. The supporting cast members all turn in strong, distinctive performances, with the formidable Emma Stone in the lead. Rhys Ifans' combination of intellectual arrogance and sensitivity make him a compelling villain. PG13. 136m.

SAVAGES. With the wreckage of Wall Street: Money Never Sleeps still smoldering, Oliver Stone again attempts to mine his back catalog for inspiration. This time, he lifts the kaleidoscopic aesthetic of U-Turn (1997), the weird sexual politics of Natural Born Killers (1994) and the pointed politicizing of almost every movie he's made. The mash-up almost works: Savages is watchable, for the most part, unlike the Wall Street sequel. In that case, a permeating over-seriousness and sense of self-importance unmade whatever positive impression the movie might have made. Ironically, Savages ultimately falls apart because Stone treats its subject matter too lightly.

Aaron Johnson and Taylor Kitsch give convincing performances as Ben, a business/botany wiz, and Chon, an ex-SEAL. Implausibly, but allowably, the two are best friends and co-owners of a thriving cannabis collective. (They also share a girlfriend, but more on that in a minute.) Ben's the brains behind the production and distribution of the most potent strain on the planet. Chon's a one-man army, controlling collections, payoffs, strong-arming -- those aspects of large-scale dope-peddling that offend Ben's delicate Buddhist sensibilities. Blake Lively plays the aforementioned shared love interest, a spoiled-rich-girl burnout.  She goes by O, short for Ophelia (guh). Their consensual love triangle and booming enterprise clip right along until one of the Mexican cartels demands a piece of the action. The boys try to outsmart them and fly the coop. O gets kidnapped, and the bullets start flying.

Back to the main problem: Ultimately this is a movie about the war going on around our southern border. It even opens with a series of chainsaw beheadings but goes no further in examining the scale and horror of the conflict. The narrative ignores any cultural implications of this international drug war, electing instead to use it as an excuse for shoot-outs and torture videos.

No less damaging is the beyond-clumsy voice-over that frames the story. Lively's performance, and the character she plays, are pretty cold and unlikeable to start with. This makes her an unconvincing narrator, and she certainly isn't helped by the script's attempt to play some kind of postmodern game with Sunset Boulevard's storytelling model. The cinematography emphasizes the bright light and tan skin of southern California and its beautiful people.

TO ROME WITH LOVE. There are two distinct tiers of Woody Allen movies. At the top we have Annie Hall (1977) and Midnight in Paris (2011), among others. They stand among the finest American comedies ever made and bear the imprint of a singular storyteller. Waaaaay down on the second tier we have stuff like this. While better than some of Allen's bombs (the almost unwatchable Scoop, for example) Rome is inarguably a minor work.

Because he's Woody Allen, he'll never have trouble attracting talented casts -- or gorgeous starlets, for that matter. And the dialogue will always be distinctive and clever. But this, like a few of his late-period movies, seems more like an excuse to take a European vacation with a film crew than a story that needed to be told. It does make me want to go to Rome, though. R. 102m.

MOONRISE KINGDOM. My enjoyment of Wes Anderson movies peaked at The Life Aquatic with Steve Zissou (2004). His subsequent efforts have been ambitious but emotionally diluted, less resonant.

The writer/director's visual style and thematic material have remained remarkably consistent over the years. Like it or not, the guy's built a career paying homage to naif art, the French New Wave, Powell and Pressburger, and art/music/culture of the early-mid 1960s. His movies are meticulously assembled little masterpieces of style that have spawned countless knock-offs in cinema, television and advertising.

Thematically he's spent this first part of his career exploring loneliness and family dynamics. More than once, romantic relationships have served as a stage for unpacking these ideas, and Moonrise Kingdom represents a culmination for Anderson, stylistically and thematically.

As a storyteller, he has often approached sexual relationships from the prospective of a precocious adolescent. This was previously best exemplified by Jason Schwartzmann's Max Fischer (Rushmore). Like any number of Andersonian protagonists, Max is wise beyond his years but ill-equipped to navigate the humid, unseen world of adult sexuality. This world comes crashing in on him in a particularly painful confrontation with his teacher/would-be lover, Rosemary Cross (Olivia Williams). In The Royal Tenenbaums, Richie's fumbling, heartsick fixation on his adopted sister Margot is another fine example. The list goes on.

So it seems only fitting that Anderson finally turns this perspective on itself in Moonrise Kingdom. Rather than again applying the narrative formula to a pair of adults or building another age-inappropriate crush scenario, he calls a spade a spade and tells the story of two troubled misfits finding each other within the maelstrom of puberty.

Sam Shakusky (Jared Gilman) is an orphan recently turned out of his foster home. He's also a crackerjack Khaki Scout who can't make friend with the rest of his troop. Suzy Bishop (Kara Hayward) is the sullen eldest child of two neurotic, self-involved attorneys (Bill Murray and Frances McDormand). Sam and Suzy fall hard for each other and attempt to escape into the wilds of a largely unpopulated island in 1960s New England.

In classic Anderson style, a colorful array of supporting characters mobilizes to catch and separate this mid-20th century Romeo and Juliet. There's the well-meaning, naïve scout leader (Edward Norton), a "sad, dumb policeman" (Bruce Willis), the brutally efficient Social Services (Tilda Swinton), and a troop full of bloodthirsty pre-teen boys off their leashes. The chase winds down into a less-bitter-than-sweet -- though predictable -- resolution.

The cast, composed of unknowns sharing the screen with the most seasoned of veterans, is terrific. Anderson's characters require a particular cadence and pathos, and everybody here is on board. Behind the camera, he pulls out the stops, packing every artfully composed frame with period equipment and media. He fits in some beautifully produced miniature sequences, a wandering weather scientist as narrator (Bob Balaban), and the prerequisite slow-motion processional shot. But he also manages, perhaps more effectively than ever before, to illuminate the not-completely unpleasant ache of impending adulthood and new love.

Although I was initially cynical about Moonrise Kingdom, I'm now struck by the maturity and self-assuredness of it. It's about young love, but it may be Anderson's most grown up movie yet. PG13. 94m.

ICE AGE: CONTINENTAL DRIFT. Yet another installment in the computer-animated adventures of a woolly mammoth (voiced by Ray Romano), a saber-toothed tiger (Denis Leary) and a lisping sloth (John Leguizamo). PG. 94m.

FOR GREATER GLORY. Andy Garcia stars in this historical chronicle of the Cristeros War (1926-1929), a popular uprising against an anti-Catholic Mexican government. R. 145m.

Toned Italian pecs feature prominently in this week's Sci-Fi Pint and Pizza Night, Thursday at the Arcata Theatre Lounge, with a pair of sword-and-sandal epics: Fury of Hercules (1962) followed by Triumph of the Son of Hercules (1962). 6-10 p.m. On lucky Friday the 13th, Oliver Stone's 1991 biopic The Doors stumbles into the ATL, with Val Kilmer as Jim Morrison, trippin' balls in tight pants. R. 140m. 9 p.m. Last year's The Muppets successfully revived the genius and playful spirit of the late Jim Henson. On Sunday you can catch The Muppet Movie (1979), their delightful and star-studded feature film debut. G. 95m. 6 p.m.

You have four opportunities over the next week to catch Who Bombed Judi Bari?, the award-winning documentary about the late Earth First! activist who, along with SoHum agitator Darryl Cherney, was blamed by the FBI for the 1990 explosion in their own car. On Friday and Saturday the film will screen at the Mateel Community Center -- doors at 7 p.m., show at 7:30 both nights. On Sunday it will show at the Arcata Playhouse (same show times), and Monday it'll be at the Arcata Theatre Lounge -- doors at 7:30 p.m., movie at 8. Cherney will be in attendance at all screenings.

KATY PERRY: PART OF ME. But which part? Starting Thursday, this behind-the-scenes documentary takes you backstage with the bubbly tween pop idol, who split with British funnyman Russell Brand during production. See the drama and the Sesame Street-scandalizing décolletage in 3D! PG. 95m.