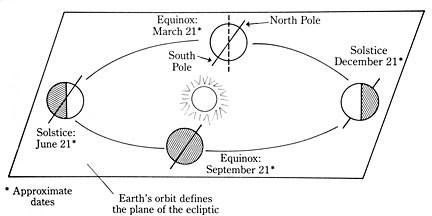 Don't forget to set your alarm so you can celebrate this year's winter solstice, one of Earth's four annual regular-as-clockwork astronomical events -- the others being the summer solstice and the spring and fall equinoxes. Solstice happens here in Humboldt -- and everywhere in the Pacific time zone -- on December 21 at 4:04 a.m.

The word solstice comes from the Latin solstitium, "sun standing" -- that is, the time when the sun, having reached its lowest point in the sky (as seen from the Northern hemisphere), might be thought, poetically, to hesitate before its six-month ascendancy to its zenith, next year's summer solstice. The lower the sun, the less radiation, or "insolation," we receive from it, so solstice is the time of minimum insolation.

That's from Earth's point of view, with the sun getting higher or lower in the sky depending on the season. From the sun's point of view, it "sees" more or less of Earth's twin polar regions, as our tilted planet whirls around it (relative to the background stars) on our 600 million mile annual journey. See the accompanying diagram. The moment when the sun has its most expansive view of Antarctica around the south pole is our winter solstice.

Temperature here on Earth is also governed to some extent by our distance from the sun, which varies throughout the year due to our elliptical orbit. However, since we're closest to the sun ("perihelion") in northern winter, obviously distance isn't as important a factor as the sun's apparent height in the sky. The date of the next perihelion is Jan. 4, 2009.

Astronomically, winter in the northern hemisphere starts with the winter solstice and ends with the spring equinox (March 20 next year). But "winter" means different things to different people. For instance, Celtic winter starts with All Hallows (Nov. 1, the day after Halloween) and ends at Candlemas (Feb. 2). Here in Humboldt, most of us think of "winter" simply as the coldest season, whatever the sun might be doing. The minimum temperature lags about a month behind minimum insolation (since Earth heats up and cools off and heats up relatively slowly, the same as your iron), so we usually think of winter as December-January-March.

With luck, sometime in March, we'll start appreciating the warmth of the season. Just in time for the spring equinox.