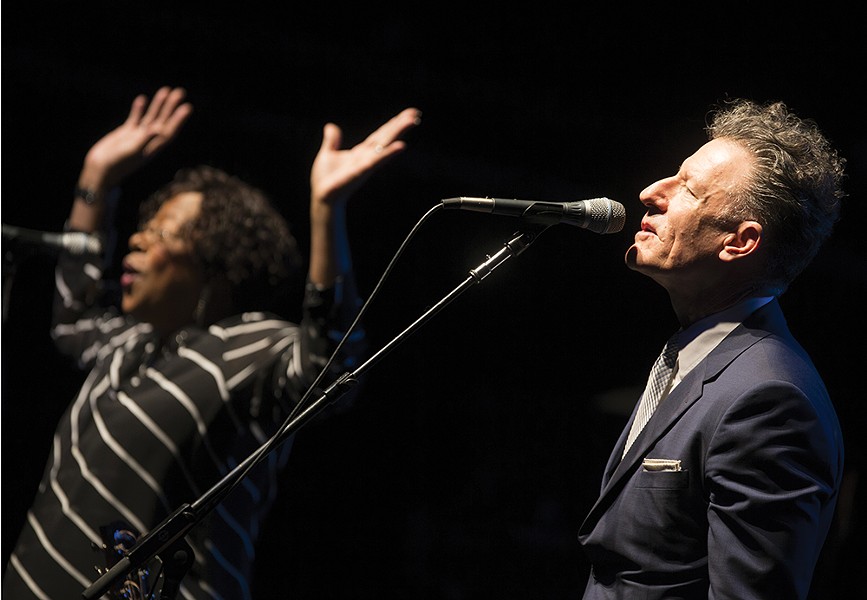 Lyle Lovett and His Large Band

Courtesy of the artist Lyle Lovett and His Large Band play the Van Duzer Theatre on Thursday, Sept. 13 at 8 p.m.

OK, I am back in town and happy to say that in my absence none of you managed to burn the place down. And in this new reality of having a permanent fire season — the smoke from which I drove through in two separate states. I am not really joking and, looking at the impending hurricane action bearing down on other parts of this country, I am driven to wonder two things about climate change: Is it really too late to reverse course and will we ever really prosecute the plutocrats responsible for this evil? The optimist in me hopes for a "yes" on both counts but the realist in me wouldn't bet on it. Until we see a general strike, I believe that the only balm we have for the wrongs around us is music and dancing. Will our future celebrations be a victory strut across the lines once owned by a toppled power elite? Or will we instead dance a mad jig in the midst of an end-times plague? God knows but one way to find out is to vote in the upcoming midterm elections and encourage others to do the same.

In the meantime, though, enjoy your week. May it be a good one.

Lyle Lovett brings his Large Band to the Van Duzer tonight at 8 p.m. for an evening of Texas-flavored cowboy swing delivered by the best in the business. Having pursued his craft for longer than I have been alive, Lyle will likely put on a great show. As for the $89 ticket price? Well like I said, he does come with a large band.

Vocalist, violinist, and Beirut native Georges Lammam brings his group — appropriately called the Georges Lammam Ensemble — to Fulkerson Hall tonight at 7 p.m. to present an evening of Arabic music and dance. Musicians in the ensemble will play traditional instruments like the delightfully expressive chordophonic oud — have I ever told you that I have an oud? Well I do, although if I am being honest, I can't really play it well — while local belly dancers Shoshanna and Laura Ayllon will provide the hypnotic midsection jigglin'. Advance tickets are $15, $10 students, while tickets at the door will be $5 more, so yalla yalla!

Later on in the evening over at the Arcata Theatre Lounge, you will find Los Angeles' own premiere good-time funk band Orgone busting out a groove for all of the local rug-cutters who know disco from Crisco and care about dancing to live jams. Will any of the featured instruments be the FDA-confiscated equipment that Wilhelm Reich pioneered to the ire of the evil and stuffy G-Men of mid-century America? Probably not but there's an easy way to find out at 9:30 p.m. ($23).

It's North Country Fair day in Arcata and if you have had your fill of booths, crowds and doppler-effected live music heard while eating on the fly BUT you have your family in tow and are still looking for some entertainment, then I have a to-do for you. The Sanctuary is hosting an all-ages workshop with local shadow puppeteer Sean Shadows at 6 p.m. All those who participate will learn to craft a shadow puppet of their very own to take home and, best of all, there will be a performance by local polymath plot-setter and all-around rad artist Violet Crabtree and her Comix Trip. The suggested donation is $25.

The Outer Space has a palatial and potentially spooky show at 7 p.m., when the dark Pennsylvania grave-digging folk sounds of Geist & the Sacred Ensemble collide with some local psychedelic flavors. Which flavors you ask? Well how about the always-good haunted duo Die Geister Beschwören and the spiritual realm-informed collective Medicine Baul, who are energized by the eternal essence of our dearly departed Vinny from on high. This is a good show to just trance out to on a bit of Sabbath day bliss ($5).

Once upon a time in the more innocent era of mid-century pop and rock, there was a band called Jay and the Americans, an inoffensive vocal group whose claim to fame beyond some treacly ephemera "hits" was that their touring band was staffed by genuine geniuses Donald Fagen and Walter Becker during their pre-Steely Dan days. What am I getting at here? I don't really know but Blondies has a funk band trio tonight at 6:30 p.m. called Dan and the Americans so I am just free-associating band names while flicking the tail of my resin-sculpted Diplodocus figure in an attempt to stave off ennui and writer's block. Ronny Two Shows opens and the visual effects will be by LightsbyShawn. The price is TBA.

Alt-country/folk/jam/druggy space cadet and one-man musical asteroid Todd Snider brings his unique and shambolic act to Humbrews tonight at 8 p.m. Noted for everything from being too spun out (allegedly) for Hunter S. Thompson to being a jam rock curio wunderkind prancing through the sunset of the baby boom generation, Todd also writes some pretty cool songs. Opening the show will be Boston's folky Reed Foehl ($25).

Austin-based decade-and-a-half-old anti-folk players Origami Ghosts will be haunting Eureka tonight with deconstructed — or perhaps decomposing — acoustic melodies for those lucky and wise enough to creep into the Siren's Song tonight at 8 p.m. (price TBA). Along for the ride are neo-folksters Boo Hoboo and local oddity merchant mister moonbeam.

Collin Yeo would like to wish those who care a belated l'shana tova tikateyvu. He lives in Arcata.