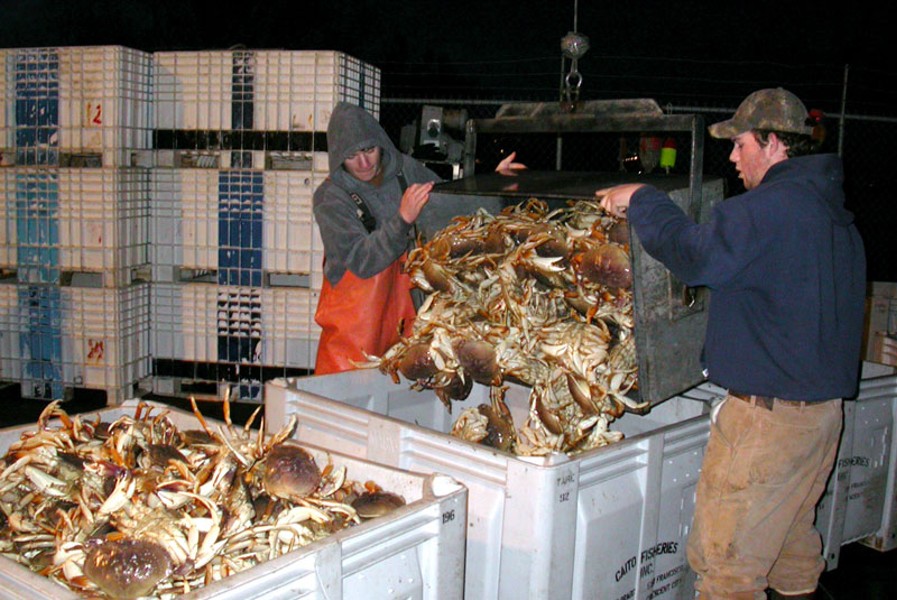 Heidi Walters. The catch that may not come.

"This was a weird year for the ocean," says Dave Bitts. The 40-year veteran of the local fishing industry and president of the Pacific Coast Federation of Fishermen's Associations is docked at Woodley Island. He sits at the Marina Café nursing a cup of coffee and talking with some other fish folk about the weather. Normally, the captains wouldn't be found on dry land any morning past the first of December, the traditional opening date for crab season on the North Coast, but a public health threat has grounded the fleet, spelling possible disaster for thousands of small businesses and families. As Bitts said, it's no ordinary year.

First, it was the salmon, or the lack thereof. Many small operators fish for salmon in the summer and crab in the winter to make ends meet. This year, however, the runs were thin. Bitts says he grossed about half of his usual haul. He caught a total of six fish after July 8.

"The fish were eating stuff I'm not used to seeing them eat," he says. "Salmon are wonderful creatures. They can survive off almost anything. This year, though, I cut them open and saw a lot of small octopuses in the fish. I caught fish that were plugged with them. I've never seen that before."

Wade Sinnen, senior environmental scientist with the California Department of Fish and Wildlife, says that although salmon numbers have not been finalized, experts think they will "not meet pre-season expectation."

"We had that warm water sitting off the coast, it definitely affected the distribution, if not the numbers," he says, adding that scientists have also noticed the salmon eating strange things, indicating that their normal diet may have been disrupted.

Biologists also blame warmer ocean water for a large algal bloom stretching from the central California Coast up to Washington. The biggest bloom in over a decade, it's producing unprecedented levels of domoic acid, a powerful neurotoxin that has rendered large quantities of shellfish harmful to human health and forced public officials to stall the opening of the crab fishing season.

"I'm upset, I'm not happy," said Charlton Bonham, director of the California Department of Fish and Wildlife, at a recent hearing on the delay of the season. "This is a situation that's causing real harm to many people."

At the hearing, which was hosted by State Sen. Mike McGuire and Assemblyman Jim Wood on Dec. 3, Bonham reviewed the options in front of officials.

"I don't know when we will open. You deserve honesty," he said. "Should we hold and open statewide? Should we open on a regional basis, taking into consideration that a crab may not respect a regional boundary?"

The CDFW has set up a hotline and a webpage for crabbers to call for updates. It will take two consecutive weeks of clean tests before the agency considers opening the season.

"The reports are inconsistent," McGuire says in a phone interview. "One week we'll have crab with low levels of domoic acid, another week high levels. We are very much starting to plan for the worst."

The worst, many agree, would be no crab at all. It already seems likely that the season may open after Christmas, traditionally the height of consumer demand for the Dungeness.

"In particular for Del Norte and Humboldt counties, we are dependent on crab industry for a healthy economy," McGuire says. "There was a $95-million crab harvest last year; the average is $60 million. There are very few industries that put people before profit, and this is what the Dungeness crab industry has done this year."

McGuire refers to the publicly stated desire of many crabbers to ensure safe conditions before hoisting anchor.

"We don't go until we can prove that the crabs are clean," Bitts says. "Our chances of putting a bad crab on the market are vanishingly small. We want the chances to be as small as they can be. We're kind of proud of ourselves for being proactive. We're not recalling anything like the beef or the peanut butter people."

McGuire, too, praises the high standards of Bitts and his ilk.

"It is the first time you've had such significant coordination between crabbers, processors, state and federal government," McGuire says. "But we're also in unprecedented times."

At the Dec. 3 hearing, which brought together scientists, politicians and state officials, there was near-unanimous agreement that climate change is responsible for the changing ocean. Cat Kuhlman, deputy secretary for Oceans and Coastal Policy at the California Natural Resources Agency, warned that these conditions "are the new normal." Many who work the seas agree.

"It's impossible to say climate change is not involved," Bitts says. "With ocean acidification ... we're not looking at a smooth and linear change."

McGuire has put out the call to those in the industry to begin tallying this season's costs so far for possible reimbursement, should a state of emergency be declared. On Nov. 24, congressional representatives sent a letter to Gov. Jerry Brown requesting the state consider compensation if the season is canceled.

Bitts says some relief money would be welcome, especially to pay seasonal workers who have been standing by, waiting for their chance to pull out of port. Many captains have lost their crews already. Still others have sunk their savings into gear and getting their crafts ship-shape, leaving little left over for buying Christmas presents. But Bitts says he would rather have the season open late than not at all, adding that the most profitable season he ever had began in January. A start as late as March or April, though? That would be hard, he says.

Businesses and industries tangential to crabbing are also feeling the squeeze. Processing plants, which normally run all hours at full tilt during the season, have stopped hiring. On the other side of the bay, Seth Griggs, third generation owner of Custom Crab Pots, says that a busy November has tapered off into silence.

"This is the first time we've ever laid off guys before Thanksgiving," he says. "I hear of guys moving out of the state, some of them just trying to get work wherever they can."

But, he adds, crabbers are used to an occasional "bump in the road."

It was a similar bump that knocked Tim Harkins, formerly a Trinidad crab fisherman, out of the industry in 1992. The season was delayed by many rounds of price negotiation and the subsequent strike of crabbers up and down the coast as they waited for buyers to set a better price per pound.

"It was unusual because people got together," Harkins says. "There was solidarity up and down the coast."

Strikes, delays due to underweight crabs, and the vagaries of the weather are common in the industry.

"I would never have much of a margin," he says. It was, and is, a gamble. Bigger operations might make a year's salary in two months. Harkins fished year round. With two kids at home, he was barely making it.

The strike broke when some boats in Newport decided to leave harbor. Everyone else followed suit, "stumbling out of the gate." Then, a few weeks into the season, the news came down. Domoic acid had been found in shellfish off the Washington Coast, the first such discovery. Fishing stopped for the season, and Harkins decided to get out for good. He went on to become a school bus driver, a job with its own set of challenges but a great deal more stability.

"When you fish, there are so many things you have no control over, and one or two more make it the tipping point," he says.

'Twas the night before Christmas, and all through the hall,
all the fisherman sat at the conference call.
The boats, they were nestled all snug in the bay,
in hopes that tomorrow would be opening day.
And Bud with his checkbook, and Vince with his pen,
were just sitting down, they had done it again.
They had to come up with some new kind of story,
"Well you know guys we've got way too much inventory.
The most we could possibly pay you's a buck,
if you want more than that, well you're shit out of luck."
In all of the ports there arose such a clatter,
people jumped out of bed to see what was the matter.
"All right guys, calm down now, you've vented your spleen,
perhaps we could give you a dollar fifteen."
"Enough of this bullshit, we've had it to here,
we're not goin' fishing, we're not setting the gear."
So we tied up the boats, put away all the bait,
and we all settled down for a long winter's wait.
In Fort Bragg and Eureka, "Come hell or bad weather"
Crescent City and Brookings "We're sticking together!"
And even in Trinidad, Port Orford too,
but we just didn't count on that bad Newport crew.
"We're not sitting around, nah, we're setting the gear
the rest of you go stick a squid in your ear!"
Well the wind it was calm, and the ocean was placid,
then came unfamiliar words, DOMOIC ACID.
"For some weird sort of chemical found in the guts
they're closing the season, those guys must be nuts!"
We ranted and raved, but 'twas to no avail
'cause the Feds and the bureaucrats always prevail
After twenty-some odd days, we finally did go,
and over both shoulders some crabs we did throw.
But there weren't too many, and a pretty poor price,
For a lot of us Christmas really wasn't that nice.
Well you knew things got screwed up, now you know the reason.
Happy New Year to all, and, well, maybe next season.