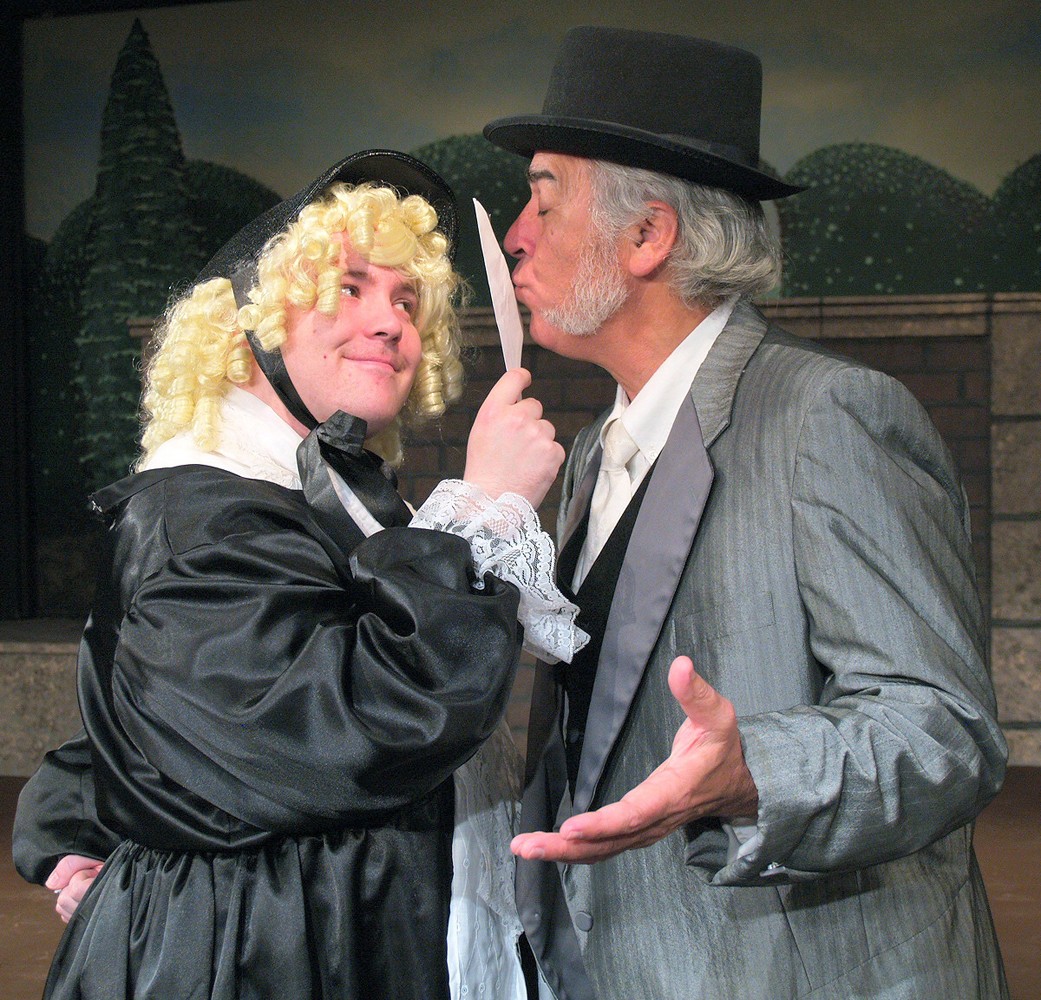 Two Oxford students in 1892 are in love with two young women and invite them to lunch to tell them so, but they need a chaperone to maintain propriety. Charley Wykeham's aunt (who he's never met) is conveniently scheduled to be around -- until she inconveniently cancels -- so they enlist a classmate to impersonate her. Various complications ensue.

It's an old chestnut, a war horse of a play -- or maybe a charley horse chestnut. Charley's Aunt by ex-music hall performer Brandon Thomas was so popular for so long when it opened in England in 1892 that it spawned associated merchandise, like Star Wars or Harry Potter. In the U.S. there have been six Broadway productions of this cross-dressing farce, beginning quickly in 1893 but ending ignominiously in 1970 when a production closed in a week. These days it's seen most often in high school and college productions, and it's now at the North Coast Repertory Theatre in Eureka.

So questions naturally arise with plays of this pedigree: Does it translate? Does it still work? Is it still funny?

Thanks to the NCRT actors and probably coaching by director Nathan Emmons, the British part does translate. In particular Jasper Anderton (as one of the students) and Anders Carlson (as the cross-dressing Lord Babberly) not only nail the Brit accents, they revel in them, and use their music (especially the resonant possibilities of deeper tones) to create as well as enhance the comedy.

The cultural differences from that age to this don't seem much of a barrier either. The actors were mostly convincing. Anders Carlson has the central comic part and came through with his best sustained performance that I can recall. Phil Zastrow had some crazed Alistair Sims moments, while Kathleen Marshall (as Charley's real aunt) was intriguingly understated, and the rest of the cast carried their required load: Neal Schoonmaker, Brittany Williams, Lanelle Chavez, David Moore and Jackie Bookstein.

But does it work? It's certainly funny some of the time. Though it isn't pure farce (it ends up with more marriages than a Shakespeare comedy), that's the source of its laughs. But farce is about concentrated energy, and this play sprawls, as does this production.

Charley's Aunt has also been made into movies in Germany, Denmark and Russia as well as the U.S. and England. Unsurprisingly, none were faithful to the play, but that could be the key to reviving it. The NCRT production even keeps the old three-act structure, resulting in a play that is too long and too diffuse to maintain the energy of farce. It also creaks at times, like a farce with a charley horse.

This production also locates the action throughout the theatre, including in the aisles. I realize that diffusion in the pursuit of variety and "stage pictures" is the theatrical fashion, and I'm unlikely to convince anyone that people shouting at each other from long distances bleeds both drama and comedy from the stage (or the aisles). But it may hurt particularly in farce, where in a sense the comedy comes from claustrophobia.

Two holiday productions begin this weekend. Dell'Arte's touring show this year is The Musicians of Bremen, which I'll review next time.

I wasn't around for the premiere of Charley's Aunt, but I was for Amahl and the Night Visitors, which was shown on TV every Christmastime during the ’50s -- sometimes called the Italian Decade in popular music, not only for crooners like Sinatra and Perry Como but for the popularity of opera music. After all, the first million-selling record in America was by Enrico Caruso, and operatic voices like Mario Lanza were often heard on radio in those years.

But even in these different musical times, the Three Tenors phenomenon suggests openness to the operatic. It's also more exciting live. Amahl and the Night Visitors is sung in English, and since the story involving the three Magi and the Nativity is told from a child's point of view, it remains a family Christmas classic.

Amahl and the Night Visitors opens at Ferndale Rep on Friday Nov. 26 and runs Fridays and Saturdays at 8 p.m. and Sundays at 2 p.m. until Dec. 19.

The Musicians of Bremen has its opening weekend Friday (Nov. 26) running through Sunday evenings in Dell'Arte's Carlo Theatre before heading out on its traditional North Coast tour, returning to the Carlo Dec. 16-19.