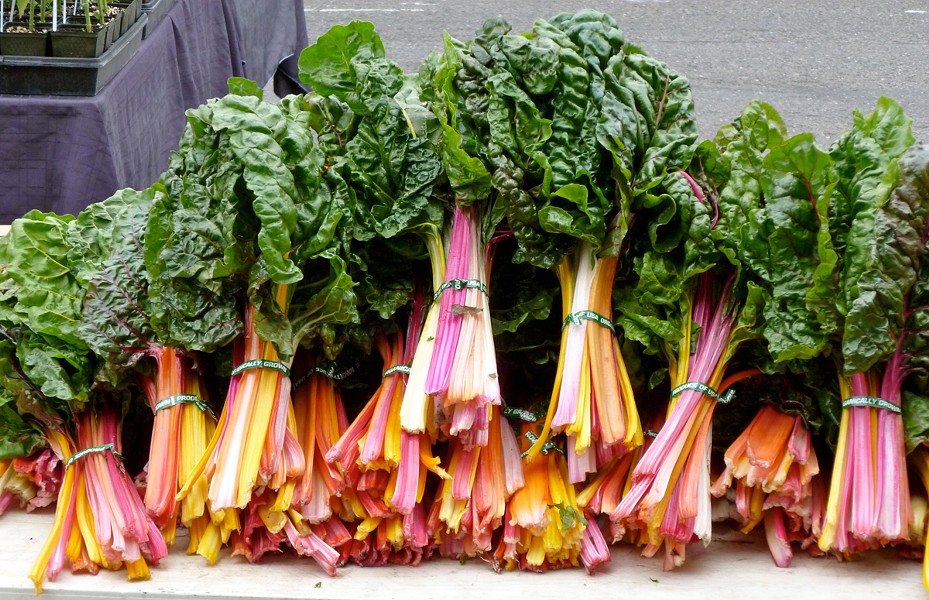 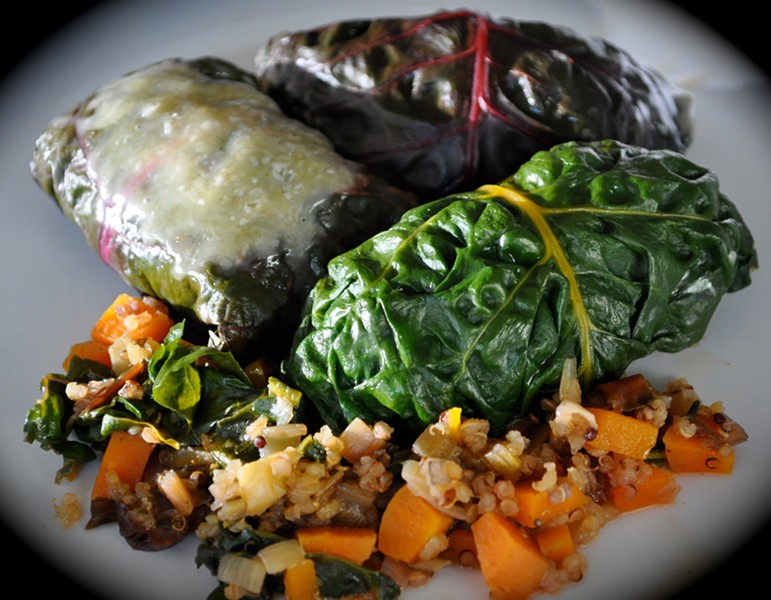 As the season progresses, a wider variety of fresh fruit and vegetables becomes available at the Arcata Farmers' Market. But from the very first day, Swiss chard could be purchased from several farmers. If you managed to walk all around the Plaza last Saturday and go home without any chard in your basket, you'll have time to make up for it. In fact, the Humboldt Local Produce Availability Chart (downloadable from Humboldt CAFF: www.caff.org/humboldt), tells us that chard is available year-round.

Why would you want to be tempted into putting (at least) a bunch of chard in your basket? First, because chard is good for you. A New York Times article by Tara Parker-Pope, "The 11 Best Foods You Aren't Eating" (June 30, 2008), lists Swiss chard in third position, describing it as "a leafy green vegetable packed with carotenoids that protect aging eyes." (If your doctor recommended limiting or avoiding chard because of its oxalate content, you should comply with the recommendation.)

So, chard is good for you, but what about its flavor, texture and looks? Chard is a winner in all those categories. I'll deal with the last characteristic first. A deep green body and legs of various colors give chard a fascinating and photogenic look -- in particular, "rainbow chard."

According to Alan Davidson's The Penguin Companion to Food, "The history of chard has been traced back to the famous hanging gardens of ancient Babylonia ... Cicla in the vegetable's scientific name [Beta vulgaris ssp cicla] derived from sicula, which refers to Sicily, one of the places where chard first grew. Chard is popular around the Mediterranean especially in Provence and Nice, and in Catalonia ... where the leaves are often prepared with pine nuts and raisins, a dish with Arabic origins."

I liked this vegetable even as a child in Italy where the word for chard is bietola, or bieta. The variety of chard I knew there was the one with a white stalk. When I moved to California I was introduced to technicolor chard. My mother would boil chard and then serve it at room temperature dressed with olive oil and lemon juice, or ripassata -- warmed up in a frying pan with olive oil and garlic. She also used it as stuffing for double-crust pizza. While I have made variations of all of the above, here I will offer two other possible uses.

Large leaves of chard just beg to be filled and rolled. Once cooked, they need to be handled with care, but there is enough material that usually your involtino (roll) will look good even when there is a little mishap in the rolling. Consider my recipe simply a suggestion: Exercise your imagination in combining ingredients for the filling. A nice characteristic of this recipe is that it uses both the leaves and the stalks.

For ideas on preparing chard for stuffing I turned to Deborah Madison's Vegetarian Cooking for Everyone. From the same source I took also the idea of chopping the chard stalks and adding them to the filling.

For the filling, I use either hull-less barley or quinoa, a nutritious seed (it contains all nine essential amino acids) that coincidentally is a relative of chard as well as spinach and beets (they belong to the same subfamily, Chenopodioidae).

Shakefork Community Farm introduced me to the idea of toasting barley before cooking it. I learned that the same technique can be applied to quinoa. If you are unfamiliar with this practice, I recommend it: Besides enhancing the flavor of grains and seeds, it is just plain fun to hear and see your grains or seeds pop in the skillet. Toasting takes little time but requires a focused attention to avoid burning. As you will see on the recipe card, the recipe for chard rolls includes other ingredients that you can find at the farmers' market, such as fresh red onion and carrots.

Many recipes for chard use only the leaves or assume a short stem. I became aware of the distinct personality of chard stalks when, after moving to Milan, I tasted a dish made up of that oft-neglected part of the plant. Are chard stalks the Cinderella of the vegetable world? Let's dress them up and send them to the ball.

Try this simple recipe for Chard Stalks Gratinée. Clean and trim chard stalks; peel away fibers on the back side (as you would with celery). Slice crosswise into 1 1/2-inch long pieces. Steam or boil until tender. Meanwhile, pre-heat your oven to 400 F. Season the cooked stalks with salt and a touch of pepper, dress with a bit of olive oil, toss well. Spread in a 1/2-inch thick even layer in a gratin dish. Sprinkle with your favorite cheese. Bake until cheese is melted and chard stalks are heated through. Serve immediately.

8-10 large chard leaves, stems included (if your chard has very long stalks, trim them 4-5 inches from the base of the leaves and use the extra for the other recipe described on this page)

the leaves of a few sprigs of fresh thyme

ground cinnamon and allspice, to taste

If using quinoa: Cover with water in a bowl, massage thoroughly and drain. Do that three times. If using barley: Rinse several times and drain. Dry-toast quinoa or barley in skillet over medium heat, stirring constantly, until  the popping slows down.

For quinoa: Add quinoa to 1 cup boiling water, cover, and simmer for 15 minutes. Take off the heat, keeping covered. Uncover after 5 minutes and fluff with a fork.

For barley: Simmer in 1 1/2 cup of water until tender. Drain before adding to filling.

Measure half of the cooked quinoa or barley. (You can use the leftover in many ways; for example, add it to a soup.)

Carefully wash chard, cut off stems at base of each leaf. (Save stems for filling.) Plunge leaves into boiling water 4-5 at a time, cook four minutes, drain and spread on a towel, handling with care. Repeat process with remaining leaves.

Add quinoa or barley with drained raisins. Season with cinnamon, allspice, salt and pepper to taste.

To assemble rolls, place chard leaf smooth side down on your working surface, cut away thick part of rib at the base of each leaf.

Place 2 heaping tablespoons of filling above the cut.

Fold the long edges in over filling, then roll leaf up, starting from the base.

Repeat with the remaining leaves.

Finely dice the cutout ribs and add to the leftover filling.

Place rolls on top of leftover filling in skillet. Add half a cup of water, cover and simmer for 10 minutes.

A few minutes before the timer beeps, sprinkle cheese of choice on some or all the rolls, cover again and continue cooking.