Charon's Obol and Other Coins 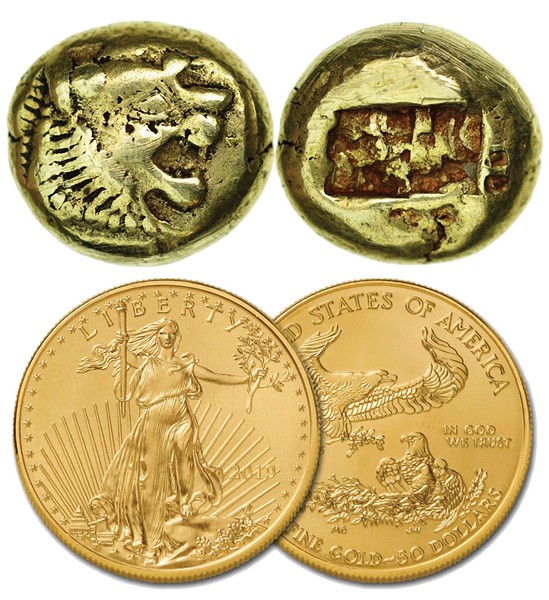 "My luggage is but a flask, a wallet, my old cloak and the obol that pays the passage of the departed."

Today, we take coins for granted. But there was a time when being able to trade a small disc of metal for a sheep, a bushel of corn or a night's lodging must have seemed like some sort of alchemy. The first coins, dating around 650 B.C., were minted in Lydia, the Iron Age kingdom located in present-day western Asia Minor. They were made of electrum, a naturally occurring alloy of gold and silver, like the one-third stater shown in the illustration, stamped with the royal lion. According to The Oxford Handbook of Greek and Roman Coinage, three of these — one stater weighed half an ounce — represented about a month's pay for a soldier. All coins used around the world today, including the dimes and quarters jangling in your pocket or purse, are descended from Lydian coinage like this, via ancient Greece and Rome.

One of the most important coins for the ancient Greeks and Romans, at least according to their myths, was "Charon's obol." Charon, the ferryman of Hades who carries the dead across the river Styx dividing the living world from the dead, demands an obol for the crossing. Which is why many skeletons found in ancient graves in the Mediterranean world are found with a coin in their mouths—traditionally an obol, or one sixth of a drachma (worth about $10 today).

More recently in literature, crazy Captain Ahab nailed a one ounce gold "sixteen dollar piece" to the mast of the Pequod. "All ye mast-headers have before now heard me give orders about a white whale. Look ye! d'ye see this Spanish ounce of gold? ... Whosoever of ye raises me a white-headed whale with a wrinkled brow and a crooked jaw ... he shall have this gold ounce, my boys!" The coin, we learn later in Melville's Moby Dick, is an Ecuadorian eight escudos doubloon, minted in Quito between 1838 and 1843.

Here in the States, the U.S. Mint has produced gold coins since 1795, other than a 53-year break from 1933 to 1986 as a result of the Gold Recall Act. Currently the mint produces the Gold Eagle in 1-ounce, ½-ounce, ¼-ounce and 1/10-ounce sizes. They actually weigh a little more than their specified weights, since they're 22-karat (not 24, i.e. 100-percent gold) due to the addition of silver and copper for wear-resistance.

And then (shiver!) there's the Zahir. This is the 1929 Argentine 20-centavo coin given in change to the protagonist of Jorge Luis Borges' short story The Zahir, whose name happens to be ... Borges. Well, it's a coin then, in 1949, but in previous incarnations the Zahir has also been: a tiger, a blind man, an astrolabe, a compass, a vein in one of the 1,200 marble pillars of the Cordoba Mosque, the bottom of a well and more. If you're already a Borges fan, this litany won't surprise you. If not, you have a treat coming. The Zahir — one of the 99 names of Allah ("The Manifest") — is "a person or an object that has the power to create an obsession in everyone who sees it, so that the affected person perceives less and less of reality and more and more of the Zahir," per Wikipedia. Borges — the fictional one, we trust — realizes that his fate is madness as he becomes completely consumed by the coin. "Others will dream that I am mad, and I [will dream] of the Zahir. When all men on earth think day and night of the Zahir, which one will be a dream and which a reality, the earth or the Zahir?" Read at your peril!

Barry Evans (barryevans9@yahoo.com) wonders why anyone would pay to get ferried over to Hades.