Mood-alleviating shows to usher you through the SAD 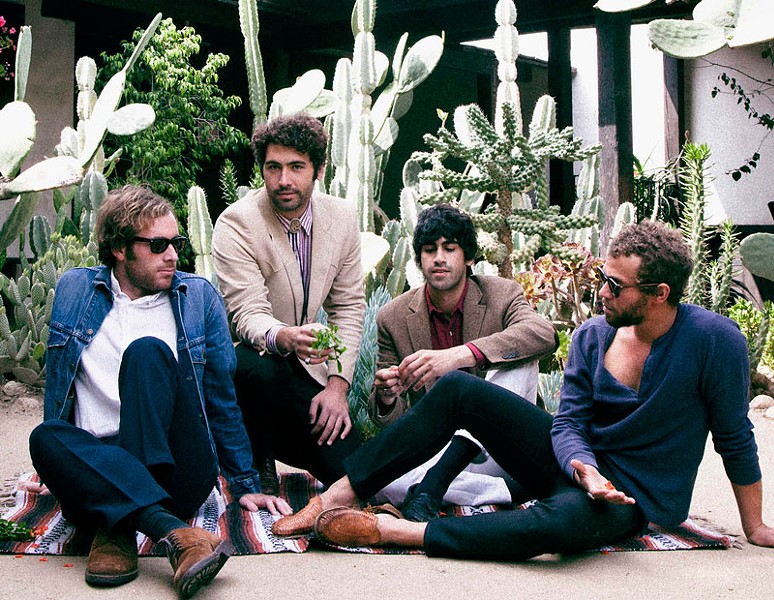 Hello, dear readers! How are you feeling? Perhaps you, too, are struggling to adjust to the early darkness, thinking it must be about time to crawl into bed and then realizing it's only 7 o'clock. Maybe the lethargy is compounded by the fact that we're reaching the end of the semester and that people who give your days meaning — or even you, yourself — are preparing to move away.

I imagined you feeling this way, lonely in the evenings and wondering if you'll make it through winter, as I strolled down a Sacramento sidewalk thick with fallen leaves, all brilliantly orange and red under the shining streetlights, noting the utter lack of a Sunday nightlife in that city and feeling grateful for the endless opportunities to savor life in the Humboldt Nation. I know your despair may not be quite as I described it — it may be "happiness," for example — but whatever mood you're in, let's rally and go out this week, shake off any winter blues and lose ourselves in what is an especially fine lineup of live music options.

Show of the Week!

Because, whoa, drop everything and let this etch itself on your brain: On Monday, Dec. 8, Los Angeles-based garage rock quartet Allah-Las is playing at the Jambalaya. If you know the band, you're thinking, "Hey, that's amazing! I must get tickets!" If you don't know it, let me give you a bit of background (TL;DR version is: extremely cool, go get tickets). The band formed in 2008 with a clearly shared love for harmonies and pop hooks, psychedelic flavor and unhindered rock 'n' roll. They released a single of "Catamaran" and "Long Journey" in 2011, produced by friend of the group and old-school soul revivalist Nick Waterhouse. Their latest effort, Worship the Sun, intoxicates with a laid-back charm that'll have you believing in endless summer. Only $12! Show starts at 9 p.m. and is 21-and-over. (Sorry, kids! Skip to the end!) L.A.'s Tashaki Miyaki and Eureka's Lost Luvs open.

Live-band-on-high-tech-hyperdrive Eoto features multi-instrumentalist Michael Travis and percussionist/vocalist Jason Hann — best known for their rhythm section role in The String Cheese Incident. The band, along with Buku and Willy Joy, performs at the Arcata Theatre Lounge. Doors open at 9:30 p.m. Tickets are $15 advance at www.worldfamousparty.com, $20 advance at Wildberries, People's Records and The Works, and $25 at the door. Show is 21-and-over.

On Friday, the HSU Symphonic Band rides the range with John Williams' music for the 1972 John Wayne western, The Cowboys — Paul Cummings conducts — and also performs music based on English and Korean folk melodies, all in Fulkerson Recital Hall. A group of HSU singers will preview "Greensleeves" and other folk songs adapted by Gustav Holst in his Second Suite, which the band plays in full. Admission is $8/$5 seniors and children, with HSU students admitted free.

On Sunday, the HSU Madrigal Singers — in costume — begin the holiday season with their traditional program of madrigals and English folk songs centered on young love with news flashes from Renaissance England, plus the Mad River Transit Singers perform jazz, bebop and blues with a four-piece backing band. Harley Muilenburg directs both ensembles in Fulkerson Recital Hall. Admission is $8/$5 seniors and children, HSU students free. All three concerts begin at 8 p.m. Tickets available from HSU Ticket Office (826-3928) or at the door.

If you show up at Arcata's Veteran's Memorial Building at 7 p.m., you will discover Dreamland, a nighttime flea market/rock 'n' roll party — how can you pass that up? Especially with L.A.'s The Zermatts (Daniel Johnston meets the Velvet Underground) and the darling (and busy!) Lost Luvs. $8 gets you in.

Also on Friday, everyone's favorite A-town jam band, Liquid Kactus, plus VJ Marmalade Sky, DJ Cha-B and RXR promise to bring you "a psychedelic night to remember" — the exact ratio of psychedelic experience to memory retainment has yet to be determined, but as the show's Facebook page says, "Long Live Rock!" Tickets are $10 at the Jambalaya, show is 21-and-over.

The Jambalaya hosts a Toys For Tots Music Showcase with The Gas Station, Vidagua, Madi Simmons, Little Kidd Lost, Redwood Blue, SFB, Dead Oak Tree and DJ Wise. Bring a new unwrapped toy with a value of at least $5 or offer up a $5 donation at the door — all toys and donations go to helping local families over the holiday season. Show starts at 9 p.m. and is 21-and-over.

Hand it to Blondie's (again) for providing an all-ages, and by all accounts very cool, venue. For those unable to make the Allah-Las, seeing The Cosmonauts is an extremely fine option, even if they are from Fullerton, a place I still begrudge due to a bad ex-boyfriend experience. I digress, although coincidentally, the band reminds me a lot of the moody, elegantly anguished-yet-catchy acts of the late '80s. How weird is it that Monday night is bringing two notable out-of-town big deal bands to Arcata? That's rhetorical. Just be prepared to hand over $5 and clap along. Doors at 9 p.m. The engrossing local Mother Vines opens.

*Technically, telling depressed people to "cheer up" is highly ineffective, especially for those with low self-esteem. (Google it.) Please know that we understand it must suck to be feeling the way you do about the various things and if you can't muster the energy to go out, that's OK. Music is still good therapy — slip on some headphones and listen to your favorite songs till the darkness passes. You are loved.