A Brooklyn transplant shows what she brings to the table 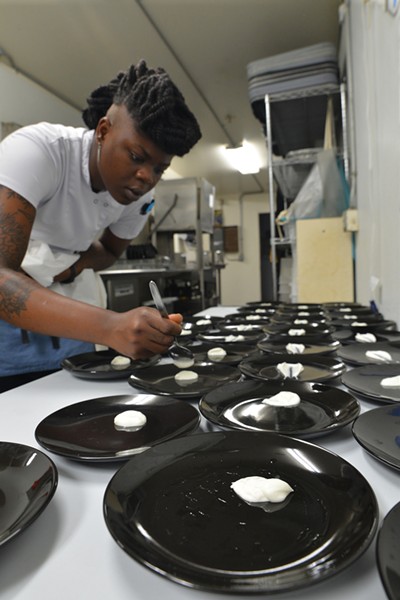 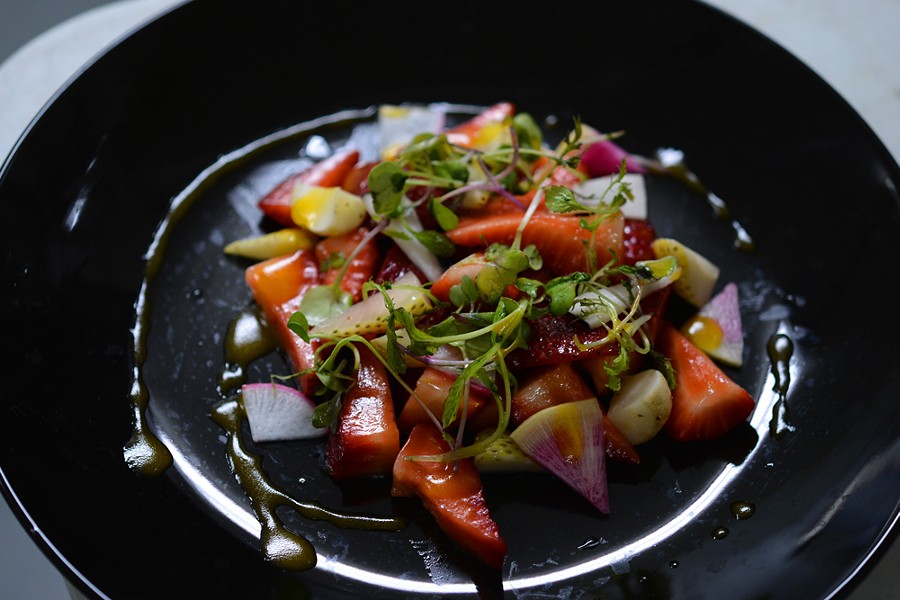 Rochelle Burgess has worked in some big-name chefs' kitchens in New York City and Brooklyn, including those of Daniel Boulud, Francois Payard, Tom Collichio and Dale Talde. But asking about the studio kitchen of the TV cooking competition Chopped will get you a groan and a laugh. If you manage to dig up her 2017 appearance as a contestant, fresh from her job as sous chef at Brooklyn's Fort Defiance, you'll see "a very young me not knowing what she was doing because she was just thrown to the wolves," says Burgess, who adds it was an interesting experience and she'd give it a shot again, despite how strange it was to cook with cameras everywhere. "I went on national TV with blue pigtails," she admits with a giggle.

Like so many people in the restaurant industry, Burgess lost her job during the pandemic, pausing a career that had been moving along briskly. This past September, she and her husband, William, who'd grown up in Arcata, packed up their place in Williamsburg in Brooklyn and moved to Humboldt. "There was nothing that was holding me down or back," she says.

But after a brief stint at the Ingomar Club and a few interviews, Burgess, who holds a pastry and baking degree from the Institute of Culinary Education, realized she wanted more than was available, and not just in terms of pay, though she notes, "The hiring and pay rate in this industry and in this county needs to change." So she found a gig cooking for international students in St. Bernard's Academy dorms and started working on building a pop-up dining venture of her own. She held her first five-course event "Hello Humboldt" at Mad River Brewing on Friday, June 10, for a crowd of 30. It was a 13-hour flurry of prepping, cooking, plating, hosting, serving and cleaning, and she's eager to do it again.

Much of the draw of a pop-up business for Burgess is creative autonomy. "I wanna do my own thing, where it's not cooking how someone else wants it to be. This way I get to incorporate the many cultures that I grew up around and my own," says Burgess, who was born in Jamaica and raised in wildly multicultural Queens, New York. Her Hello Humboldt dinner showcased her new American cuisine style, combining different flavor profiles and cooking techniques. Taking advantage of Humboldt's "beautiful" produce, she sourced salmon from Ashley's Seafood, and fruits and vegetables — including still-green strawberries, their acidic and floral flavor perfect for pickling — from farmers markets. The berries starred in the color-saturated first course with radish, calendula and turnip. "There's a lot of Middle Eastern influence in this one," Burgess says, an assertion borne out by the lamb breast served with yogurt, mint and rhubarb in the fourth course. The tasting menu closed with a chocolate crémeux served with kumquat and coconut cream.

Each course was paired with one of Mad River Brewing Co.'s beverages, from pale ale to Jamaican red and hard seltzer, for which Burgess called on her training and research, rather than tasting herself. "I've been sober for two and a half years and it was interesting to work with Mad River," getting notes from the brewer and selecting compatible elements, ingredients and flavors, "but without printing out their secrets to me," she says with a broad laugh. "I think that you can still be sober and do these kinds of pairings where you're not straw testing — you're using your culinary knowledge," she says, noting the benefits of clear-headedness and a change in her palate allowing her to taste more, similar to the way quitting smoking allows one to detect more subtle flavors.

Burgess enjoys the small footprint and strong controlling hand she has in a pop-up dinner, too. Most of her recipes, she says, are in her head and not written down, so she can work without a sous chef but still needs a couple sets of trusted hands for prepping, plating and serving. "I am fine working alone but I acknowledge that I cannot do it alone," she says, and adds she paid the three she hired for the evening $20 per hour. While ingredients were hardly cheap, there's little wasted at a ticketed dinner, since she's able to purchase only what's needed for the set number of guests. "There's a lot of food lost and food waste in this business and it pains me, it always has," Burgess says. "Basically, my food waste is what you don't eat off your plate."

Even with what she has to pay to use the hosting establishment's kitchen, the dinners pencil out on Burgess' end with less risk than paying monthly rent for a permanent brick-and-mortar restaurant of her own, especially in uncertain times that have led to long stretches of closed doors. This first night took more of an investment, including flatware, place settings, printed menus and other expenses, but profit was not the main motive this time around. "I want to show what I'm about and what I can bring to the table."

Burgess is confident she can make it worth it on the diner's end, too. "If you're going to spend $95 or whatever it is ... it should be extravagant and you should feel taken care of, and it should be special." Some of that feeling is accomplished by having the meal itself become an event. The vibe Burgess is going for is a social one, so the pair of long tables with 15 seats each are meant to foster conversations between possible strangers sharing an experience. "Which is what I want to happen. [Hello Humboldt] is not just about me meeting people in the community but it's about everyone involved."

Days later, Burgess is still reviewing her comment cards — one consisted of little drawings — and filling out her calendar with planned collaborations. Her hope is to work up to bi-monthly or monthly ticketed events. So long as "people are still excited about it and I'm not a one-hit wonder," she says, with a burst of laughter and a fortifying breath. "I'm all in. I'm going for it."