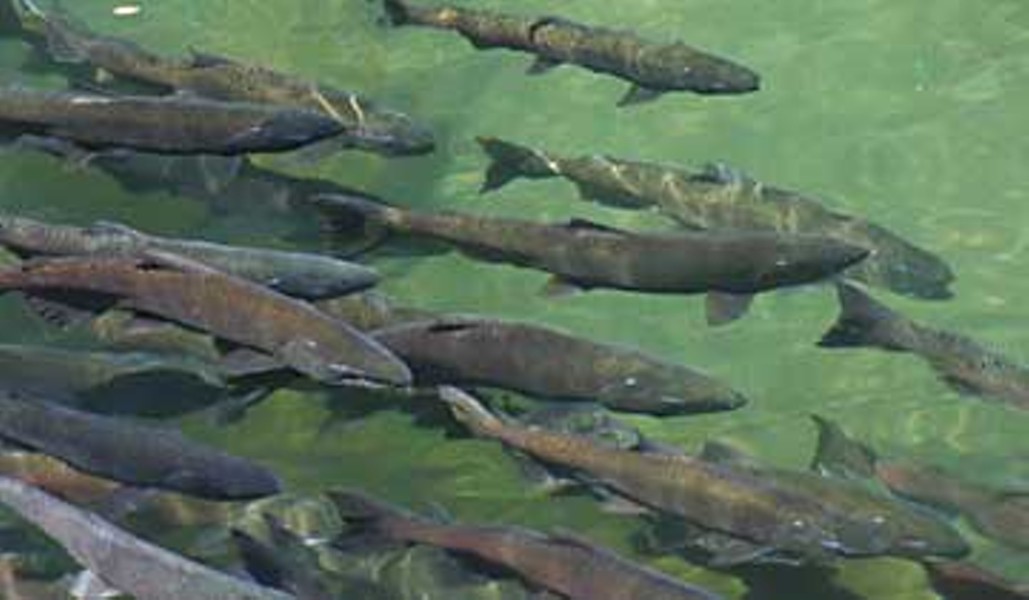 I've cooked a fair amount of salmon in my day. In the years when I worked as a chef at one place or another I became fairly proficient at filleting whole fish or cutting them into steaks. I learned various methods of preparation, but most of the time I'd chargrill the salmon and present it basically unadorned. An exception was something I borrowed from a cookbook by Alice Waters of Chez Panisse fame: I would grill a slab of red onion brushed with olive oil along with the salmon and serve it atop the fish.

In the '80s, when I was beginning my career in a professional restaurant kitchen, Waters was an inspiration, a back-to-the-roots chef who advocated a return to "real food," a "buy local" visionary who started talking about organics and sustainability before they became buzzwords.

Back then I did not think much about where my salmon came from. I bought it directly from local fishermen, or from my fishmonger, who typically got his fish from some other Pacific Coast source. Somewhere along the line Atlantic salmon came into the picture. I didn't know a lot about it, just that it seemed a pale sister to the vibrant red fish I'd grown to love.

The primary advantage was its availability. I could get it in the off-season, and sometimes for less per pound than I paid for local salmon. How could that be? Well, the Atlantic salmon is not shipped here after being caught on the East Coast; it's raised in captivity in floating pens called fish farms.

A lot has happened since the '80s, when salmon farms began popping up along the Pacific Coast from Chile to Canada. A complex range of impacts on the habitat of our native wild salmon drove them toward endangered species status. Meanwhile, chefs like Waters were becoming activists, using their celebrity status to draw attention to impacts on our food supply.

A group of those activist chefs and affiliated restaurant professionals gathered in Washington, D.C., last week to deliver a message to Congress regarding the dangerous state of the Pacific salmon fishery. They called their campaign, "Vote With Your Fork." (They also prepared the legislators a wild salmon feast.)

Their statement declared, in part, "Wild salmon is one of the unique, authentic heritage foods of the Pacific Northwest, intricately tied to centuries of Salmon Nation culture and tribal traditions. It represents perhaps our country's last great wild meal. We call upon your leadership to ensure the future of healthy, abundant, self-sustaining and harvestable populations of wild salmon and the healthy rivers upon which they depend in the West Coast salmon states of Washington, Oregon, California, Idaho and Alaska. We urge you to make every effort to protect the declining Columbia-Snake and Klamath fisheries by restoring healthy habitat and thereby sustaining our fishing seasons and a nutritious food for many generations to come."

Former chef Paul Johnson was part of the Washington invasion. Johnson runs the Monterey Fish Market in San Francisco and Berkeley, a wholesale/retail operation that supplies fresh seafood to what he humbly deems "white tablecloth restaurants," among them Chez Panisse and Thomas Keller's French Laundry. He's also the author of a cookbook, Fish Forever: The Definitive Guide to Understanding, Selecting, and Preparing Healthy, Delicious, and Environmentally Sustainable Seafood , due out in June.

"What we're trying to do with this whole 'Vote with Your Fork' coalition and movement is to bring the importance of wild salmon to Congress' awareness," said Johnson, calling from one of his markets after returning from Washington. "The only way to get fishery management under control is through politics. In my opinion, it's totally screwed.

"The people we should be supporting, the small-boat sustainable fishermen, are being put off the water by the Pacific Fishery Management Council. The way we've been managing our rivers, our wetlands and our fish has hurt the fishermen economically -- but also the whole community, from restaurateurs to wholesalers and retailers, people who sell bait, people who sell boats. Everybody gets hurt when we have a salmon season like we did last year in the state of California, where we were only allowed 10 percent of the normal amount of fish."

Rep. Mike Thompson was among the congressman who met with the Vote With Your Fork group. "What they're doing, and I applaud their effort, is trying to grow the community of interest. Right now those who are concerned about the future of salmon and salmon fishing are a few Native American tribes, a few sport and commercial fishers and people who live in the areas that have been impacted by some of these Bush administration policies that have devastated the salmon runs."

Thompson was impressed by this group of "chefs and foodies" who "value and appreciate quality food products."

"They don't buy bad vegetables or skinny cows and they don't buy farm-raised salmon. They get it. They understand that wild salmon are better. And they understand the connection between a healthy salmon stock and the quality of the environment. Salmon are our canary in the cave. If salmon are devastated it means the watershed isn't healthy."

How can Congress help the wild salmon? "You have to have good water and healthy habitat," said Thompson. "You've got to have clear passage in the rivers so the fish can get up to spawn."

How will that be achieved? "On the Klamath River we need to take out the dams," he said -- without equivocation.

Beverley Wolfe, who runs Avalon Restaurant in Eureka with her chef/husband Ron Garrido, waxes poetic about wild salmon. "The Pacific salmon, glorious creature that it is, is all about freedom and the Wild West," she said -- but the main reason Avalon chooses Pacific salmon is that, as she puts it, "Farm salmon is not healthful."

She points to the use of antibiotics, required because the fish are crowded in close quarters and thus subject to diseases, to the potential for runaways from the farms infecting wild fish, and to the dye added to their feed to make farmed salmon redder. "We're environmentally committed and we're committed to the health and well being of our guests," she said. "We're conscious that the food we put in front of them becomes part of them."

The sign in front of Mr. Fish, the seafood market on Broadway in Eureka reads, "Fresh Wild King Salmon." Mark McCulloch, aka Mr. Fish, was once one of my restaurant fishmongers. (He's no longer in the wholesale business, but that's a story for another day.) He hasn't sold farmed salmon for years. "Not since it came out about the health issues, the color-added routine and all that. I just feel better about selling wild salmon, it sells better and tastes better. It's three times the price, but it's worth it."

Johnson agrees that wild salmon is healthier, but not necessarily for the same reasons. He's looking at the health of the ecosystem. "Some of the arguments against [farmed salmon] are specious, such as color and all that -- it's not that harmful," he said. "But all of the arguments are pale compared to the fact that we're fishing the bottom of the food chain to feed these fish in an inefficient manner.

"It takes three pounds of wild forage fish, things like anchovies and sardines, to produce a pound of farmed salmon. And it does it in a way that is not natural. A wild salmon will choose the old, the dead, the stupid fish in the sardine school, but when they go in to catch fish to feed aquaculture salmon, they're taking everything, the whole school. For me that's the biggest problem. The protein transfer is totally inefficient, it would make more sense to eat the sardines."

That very hugeness is part of the problem. "The new aquaculture is the same type of thing as large industrial-style agriculture," said Johnson. "There are just four companies that own almost all of the salmon aquaculture farms in the world and they're horizontally diversified: They grow the fish, catch the fish, sell the fish."

While Johnson expressed concern that the aquaculture industry does not receive adequate government oversight, that's not what the V.W.Y.F. group was in Washington to discuss. They are primarily concerned with improving the conditions for wild salmon in North Coast rivers and in the case of the Klamath that means removing the dams.

Johnson is optimistic. "I think the dams are going to come down," he said. "I think PacifiCorp is just holding out for more governmental money. It's going to be negotiated."

Thompson is just a bit more equivocal than Johnson regarding the immediacy of dam removal. "[PacifiCorp] certainly can't believe that it's economically feasible to spend the money for the fish ladders that are required to operate the dams," he pointed out, adding, "I think when the numbers are right they will probably move on it."

In closing Thompson offered his preferred method of wild salmon preparation: brine the fish and barbecue it. He also had a suggestion for a wine to accompany your grilled salmon meal, a Bonterra Vineyards wine that includes some of the Sauvignon Blanc grapes he grows at his place in St. Helena.

"They're organic," he noted.