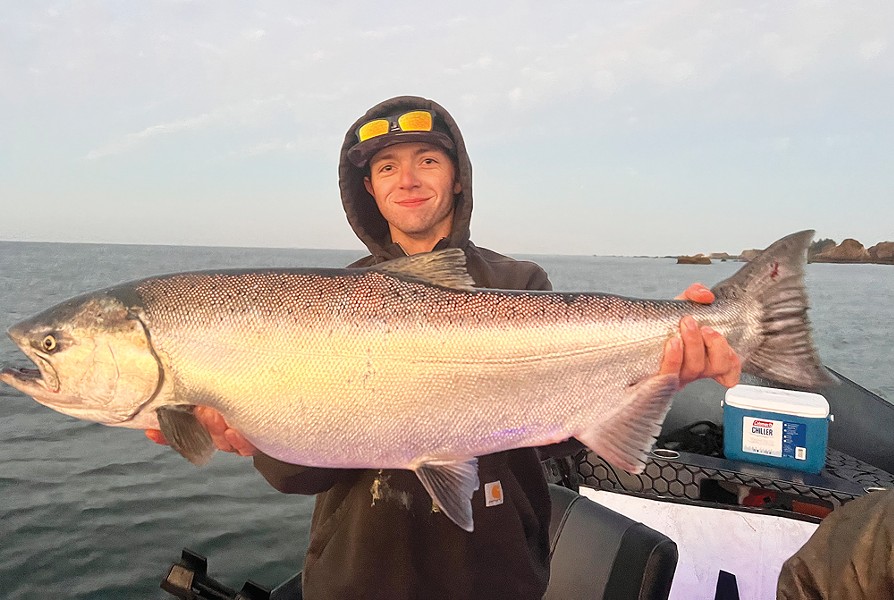 If you're looking to catch big, ocean-bright kings, you'll want to keep an eye on the Chetco estuary. Salmon have been staging in the tidewater since the beginning of September and they'll be there until rain allows them to make their way upriver. And according to Andy Martin of Wild Rivers Fishing, the season at the mouth of the Chetco is now in full swing. "With an above-average return so far this season, the estuary has been crowded, as word has gotten out about the good fishing," said Martin. "There is no ocean 'bubble' season this year, meaning all fishing must take place from the trips of the jetties inward. Trolling 360 flashers with spinner blades or anchovies has been effective this season as the technique catches on for bay trolling throughout the Oregon Coast. Trolling plug-cut herring or threaded anchovies without flashers also is working. The last two hours of the incoming tide and first half of the outgoing tide has produced the best fishing."

The daily bag limit for salmon on the Chetco is two adult fish per day, no more than one adult wild Chinook. Anglers may harvest adult hatchery Chinook until the daily bag limit has been met. Once the adult daily limit is harvested, anglers cannot continue to fish for jack salmon. Gear restrictions are in effect upstream from river mile 2.2 until Nov. 4. For additional Chetco regulations, visit eregulations.com/oregon/fishing/southwest-zone.

Over on the Smith River, the tidewater fishing hasn't been as good, but there are some fish being caught. Most of the fish are being caught by bank anglers tossing Kastmasters and Cleos. The best bite has been an hour before the top of the tide and then a few hours on the outgoing. The Smith River is currently closed to fishing above the mouth of Rowdy Creek due to low flows.

Winds will begin to decrease Friday and the ocean looks to be plenty fishable over the weekend. As of Wednesday afternoon, Friday's forecast is calling for winds out of the north 5 to 10 knots with northwest waves 5 feet at eight seconds. Saturday, winds will be out of the southwest 5 to 10 knots with northwest waves 3 feet at eight seconds and northwest 4 feet at 13 seconds. Sunday looks even better with winds coming from the northwest up to 5 knots and northwest waves 5 feet at 12. These conditions can and will change by the weekend. For an up-to-date weather forecast, visit www.weather.gov/eureka/ or www.windy.com. You can also call the National Weather Service at 443-7062 or the office on Woodley Island at 443-6484.

The upper Klamath and Trinity adult quota closure dates are not yet set, according to Dan Troxel, an environmental scientist with CDFW's Klamath River Project. "Typically, the quotas are based off harvest timing, meaning a set number of days following the closure of the adult Chinook salmon fishery on the lower Klamath," said Troxel. "As of now, the upper Klamath will allow for adult harvest likely into the first week of October. As for the upper Trinity, we like to see what's happening at Junction City and Willow Creek weirs to better inform that decision, but will likely occur mid to late October. Additionally, the Lower Trinity sector is partly informed by the recreational creel survey conducted by Hoopa Valley Tribal Fisheries; at this point harvest remains fairly low. Please keep an eye out for department press releases in the coming days and weeks."

Rock fishing at Cape Mendocino was excellent over the weekend, according to Tim Klassen of Reel Steel Sport Fishing. "There's lots of variety, and the black rockfish bite is as good as I've seen," said Klassen. "There's plenty of vermilions, canaries and yellowtails, as well. The lingcod bite has been good, too. We've been catching them up to 20 pounds, but the average is about 6 to 12 pounds. Ocean conditions looked good Tuesday and a few boats were headed south off Gorda roughly 35 miles for tuna. It was a one-day window before the wind picks back up."

According to Jake Mitchell of Sea Hawk Sport Fishing, the tuna action has been excellent for quite a few days. He said, "We've been getting them 15 to 20 miles from the Cove. We're averaging right around 25 per day and they're a really good grade. Our biggest this week was 44-pounds. It looks like Tuesday may be the last day for a while. The wind is forecast to pick up Tuesday night, we'll have to see what happens to the water after that."

According to Britt Carson of Crescent City's Englund Marine, a few boats were chasing tuna Tuesday. "The warm water pushed out a little, it was about 50 miles," said Carson. "Late last week the boats did really well around 40 miles out. Hopefully the water will stick around after the wind blows for the next few days. Other than tuna, the rockfish and lingcod bite continue to be wide-open."

Lingcod and rockfish action is fair out of Brookings reports Andy Martin of Brookings Fishing Charters. He said, "Pacific halibut season remains open, and fishing has been good on calm weather days. Sport crabbing is slow."

Fresh kings continue to move into the lower Klamath. Anglers are catching a mix of jacks and adults from the Glen to Johnson's. Fishing soft beads in some of the flats has been productive. Anglers can keep two jacks (less than or equal to 23 inches) per day with a possession limit of six.

All adult Chinook salmon caught must be immediately released and reported on an angler's report card. For the week ending Sept. 23, 219 jacks were harvested and 252 adults were released above the U.S. Highway 101 bridge.

According to Martin, the Rogue Bay continues to fish well for salmon, with lots of jacks, a few hatchery coho and some big fall kings still moving in. "The Coos also is fishing well, while coho fishing is hot on the Umpqua River."