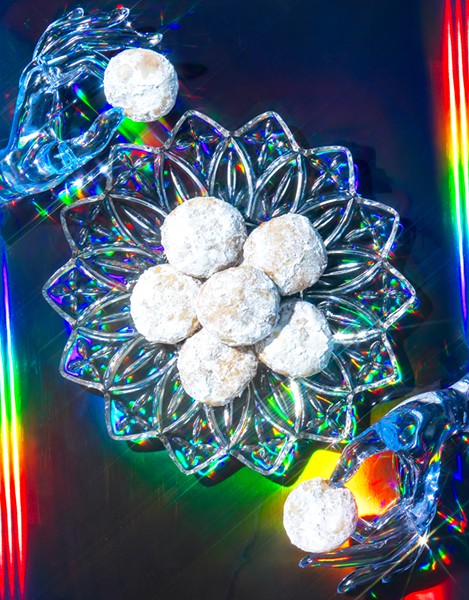 The cover of Esteban Castillo's second cookbook Chicano Bakes is like a panaderia dessert case set up in Studio 54. A flan that shines like Donna Summer's lip gloss, a square of pink-frosted cortadillo cake is cut sharp as Bianca Jagger's suit. It's a departure from the signature style of sunny lighting, bright backgrounds, and sharp shadows that defined Chicano Eats: Recipes from my Mexican-American kitchen, both the blog and book ("Playing with Tradition," June 11, 2022). But it's a natural continuation of his mission of sharing the foods he grew up loving, the ones he first learned to make for himself as a Humboldt State University student.

There are recipes for rolls and yeast breads, savory and sweet tamales, cookies and pies, cakes, pies, punches and hot drinks. Narrowing down the recipes for the "Pan Dulce Mexicano" chapter was a daunting task, and Castillo anticipates some readers will be disappointed to see a favorite missing, but a little perspective: Mexico's Cámara Nacional de la Industria Panificadora recognizes some 750 varieties of sweet bread. Among the desserts, some hew to tradition, others blend and remix, like the horchata tiramisu and red velvet chocoflan. Among Castillo's personal favorites are fresas con crema, the red strawberry and gelatin dressed up in a coupe glass. "It's one of the things I had for every single birthday," he says, recalling his childhood in Southern California. "It was that or flan." A laugh bubbles up as he adds, "I don't wanna toot my own horn but I make a really good flan."

Castillo had to push to feature those favorites on the cover instead of the cupcakes his publisher thought might have broader appeal. "I got that dreaded question: 'Is it going to be too niche?'" But as a self-identified queer Chicano who's influenced by both Mexico and the U.S., it was important that the look of the book as a whole spoke to who he is and his aesthetics. "Someone has to be first, someone has to open the door," he says. The same goes for the mirrors, rainbow colors, shine and prismatic backgrounds in his photographs — all of which he shot — instead of more conventional staging for Mexican cuisine. "I want people to revisit the way they think about things," he says.

Well, that and the disco he was listening to while working on the book — songs like Sylvester's "You Make Me Feel Mighty Real." It was 2020, during the first year of the pandemic. With so many people pandemic baking to find some pleasure in stressful times, working on a collection of the recipes readers were asking Castillo for — conchas and other treats from his Chicano Eats blog — made sense. He'd also finally come out to his father, with whom he's had a complicated relationship that's in a far better place now. "I felt free," Castillo says. "Super light and liberated. And disco was one of the things that helped me get through the workday in 2022. ... It makes you want to dance; it makes you really happy," and he wanted to bring that energy and joy into the book.

Along with its disco vibes, Chicano Bakes is easy to follow. "One of my goals was making sure these recipes are accessible," says Castillo, "not fussy, so that anybody at any skill level can just get in the kitchen and have some fun." Hence his use of all-purpose flour throughout and ingredients that aren't too challenging to get ahold of.

The Mexican wedding cookies, or besitos de nuez, shared here from Chicano Bakes, are an example of Castillo adding his own touch to tradition but keeping it accessible. He says he swapped pistachios into the classic nutty, powdered cookies but, while the flavor was nice, they were pricey. So he went with equally flavorful pecans, browned butter for extra richness and a touch of hazelnut liqueur. They make a stellar addition to a holiday cookie tray but nothing is stopping you from enjoying their fragrant glamour all year.

In a medium stainless steel saucepan or skillet, melt the butter over medium heat and wait for it to start fizzling and foaming, stirring occasionally with a silicone spatula to make sure nothing burns or sticks to the bottom of the pan. As the butter fizzles, the milk solids toast/brown, giving the finished product a hint of toffee flavor. Once the fizzling stops it's time to start checking for doneness. You want the melted liquid to be a golden color and there to be golden brown toasted milk solids on the bottom of the pan. From start to finish this should take about 12 minutes. Place the brown butter in a heatproof measuring cup, making sure to scrape all the flavorful browned bits off the bottom of the pan along with it. You should be left with just over 3/4 cup (175 g) of liquid browned butter. Set this in the refrigerator for about 1 hour or so to firm up to about the consistency of room temperature butter.

Place the pecans on a small baking sheet and toast them in the oven for 7 to 8 minutes, carefully shaking the pan at about the 4-minute mark to make sure they don't burn. Once they're toasted, tip them out onto a large plate to cool for a few minutes, then finely chop them in a food processor or with a knife and set aside. Leave the oven on.

In a stand mixer fitted with the paddle, beat the brown butter, ½ cup (50 g) of the powdered sugar, the hazelnut liqueur, vanilla, and salt together for a full 2 minutes. The full time is important because all that air whipped into the cookies helps give you the melt-in-your-mouth texture. You should see the mixture go from a tan color to an almost white color and it will have grown in volume, too.

With the mixer on low, add the flour and pecans and mix until the dough comes together. It will look dry and crumbly at first but after mixing for about 30 seconds it should form a cohesive dough.

Line one 13-by-18-inch (33-by-45 cm) baking sheet with parchment paper, then roll out tablespoon-size balls of dough and place all 30 on the baking sheet. These don't spread very much, so you can place them about 1 inch (2.5 cm) apart to bake.

Bake just until the bottoms of the cookies are barely golden brown, 15 to 20 minutes. Let the cookies cool completely on the baking sheet.

Once the cookies are cool, carefully roll them around in the remaining 1 cup (100 g) powdered sugar until fully coated, and serve. Store cookies at room temperature in a sealed container for up to 5 days.•

Jennifer Fumiko Cahill is the arts and features editor at the Journal. Reach her at (707) 442-1400, extension 320, or jennifer@northcoastjournal.com.