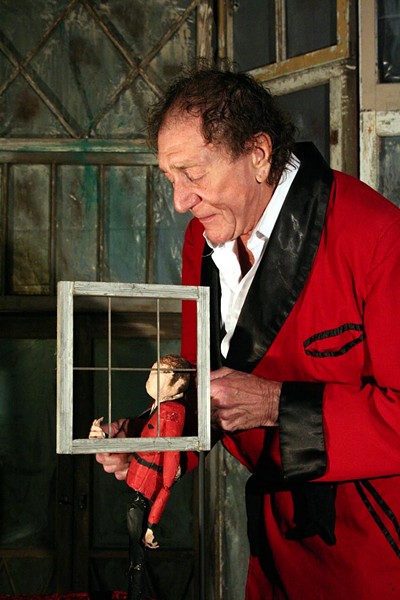 According to renowned early 20th century Italian actor Tomasso Salvini, the three most potent elements of acting are: "Voice! Voice! Voice!" You might expect that sentiment from an old-school actor like Salvini, or even actor and director John Gielgud, who suggested that while attention is often lavished on other aspects of performance, how the words are spoken "can have more effect than anything else."

But open almost any book on stage directing or acting, and they proclaim the importance of voice. The purported Stanislavski "Method" may have enshrined mumbling on American stages, but director Robert Lewis quotes Stanislavski writing at length about vocal acting: "Letters, syllables, words -- these are the musical notes of speech, out of which to fashion measures, arias, whole symphonies." Harold Clurman (another Method-influenced director) writes about it -- even Jerzy Grotowski devotes some 30 pages to vocal technique in "Towards a Poor Theatre."

A revelatory object lesson in vocal acting is available this weekend at the Arcata Playhouse, where Bob Wells performs in a short play by Arthur Kopit, directed by Dan Stone. First of all, every word Wells says can be heard, and every word can be understood. With these foundations in place, Wells goes on to act with his voice -- his intonations, pronunciations, the words he stresses hard, the syllables he lets linger and float away. Beginning with his surprising "entrance," Wells captivates, even when he does almost nothing except create this character with sound. He's masterful: both poetic and clear. We know who this man is, and we attend to what he has to say.

The play, Sing to Me Through Open Windows, is more problematic. Arthur Kopit is a contemporary American playwright with a long career that began with revolutionary absurdist romps like Oh Dad, Poor Dad, Mama's Hung You in the Closet and I'm Feelin' So Sad, but more recently has included musicals, including Nine, which reached the silver screen this year with Kopit as an executive producer.

Whether Kopit has copped out or America has caught up to his absurdism is an open question, but this early play is at best an exercise in poetic symbolism that for me remained fairly elusive in this production. There's the old magician (Wells), the boy who visits him (played by newcomer Zachery Davis with appropriate vulnerability) and a clown whose relationship to the others is difficult to assess (played with appropriate physicality by Craig Klapman).

This is the kind of challenging work that Dan Stone often chooses. Figuring out what was happening was more difficult because Bob Wells was the only one who was clearly audible all the time. Even so, a kind of ambiguity is inherent in this play. The stage imagery, including the music (all created by Dan Stone), worked well. The lighting was especially clarifying, but other choices (like the puppets) less so.

The themes of life's transitions and mythic cycles are there when you think about it, but the impact of aging was absolutely clear as an experience. That's the work of Wells, playing a magician who is in the process of himself vanishing. "Fear is like regret," he concludes, "only with fear, there's not much time left." Remarkable words to come from a 22-year-old playwright (as Kopit was when he wrote this), but very powerful when spoken by a veteran actor in conscious control of a superior vocal instrument. I particularly urge young actors to experience -- and listen to -- this performance.

This Sanctuary Stage production plays this Thursday through Saturday at 8 p.m. at the Arcata Playhouse.

Speaking of voices, the Arcata Playhouse recently hosted a live original radio comedy, broadcast on KHSU. Both Ferndale Rep and Redwood Curtain have done these, and the full house at the Playhouse also attests to their popularity. What's weird about watching a radio show is that it isn't weird at all. The talent -- too numerous to name -- was great; the script (a detective story parody involving KHSU) was mostly funny, pocked with puns and other psychic detritus (you know, crazy people from Detroit). Afterwards some participants recalled the great audio artists called Firesign Theatre, of "Temporarily Humboldt County" and "Nick Danger, Third Eye" fame. Get their CDs -- still funny, and not insane.

Coming Up: Still speaking of voices, completing its run this weekend at the HSU Studio Theatre is The Homecoming by Nobel Laureate Harold Pinter, known for his unique dialogue, and among the ensemble is another notable North Coast actor who excels at vocal acting, Jabari Morgan. Remaining performances are Thursday through Saturday at 7:30 and Sunday at 2 p.m. Info at HSUStage.blogspot.com.

North Coast Repertory Theatre presents a special one-weekend-only addition to their regular season with the one-act comedy Hidden in This Picture, running this Friday and Saturday at 8 concluding with a 2 p.m. Sunday matinee. The play by Aaron Sorkin, the writer behind television's The West Wing, tells a story of two friends involved in theatre making their first film.

On Friday, Saturday and Sunday at 8, The Dell'Arte Company Cabaret features your favorite Dell'Artesans plus special guests and a sneak preview of their epic work-in-progress: Blue Lake: The Opera. Then on Monday, Dell'Arte hosts visiting Le Cabaret Noir's Sin on Heels, advertised as "a tawdry blend of burlesque and gender-bending performances." For more on both cabarets, check dellarte.com.

And on Saturday, March 13, Ferndale Rep holds its annual fundraiser, "RepFest: Comedy Tonight" at the Ferndale Community Center. Auction items and other information posted at ferndale-rep.org.