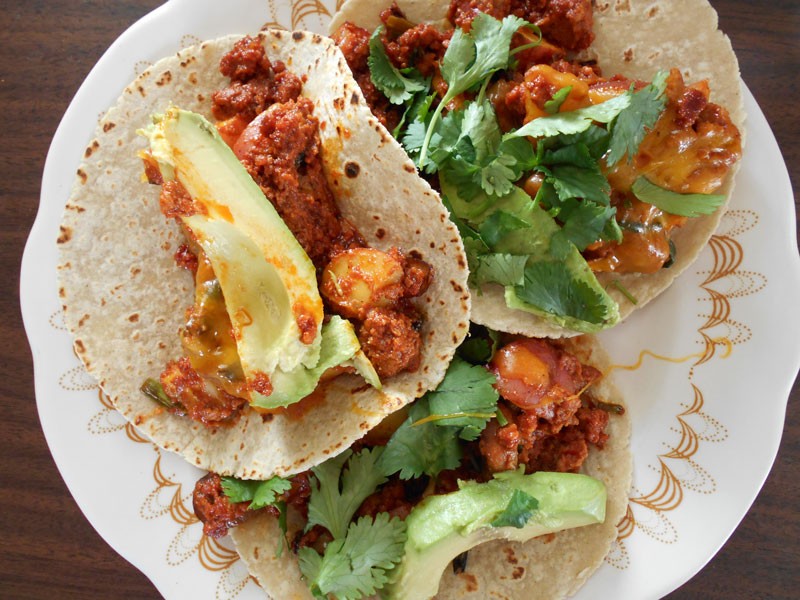 Photo Credit LINDA STANSBERRY Chorizo, like love, is filled with mystery. And lard.

To set the record straight, I wasn't trying to murder my ex per se. But he deserved it for cracking a joke with his Poblano buddies that American women only know how to take food out of the freezer and stick it in the microwave. What did he think he was getting when he chose a gringa who only owned one frying pan? Pendejo.

"Give up, chula, please give up," he moaned, clutching his stomach.

It was after that second failed attempt at making carnitas from scratch that I turned the cooking over to him. Sucker. Handmade tamales for me? Yes, please.

But then I discovered chorizo. Oh, chorizo, every time I think I'm out, you suck me back in. The burnt sienna color stuffed into a blunt, little plastic tube with dots of pure lard winking out from the packaging, your ingredient list at once sincere and disturbing — pork salivary glands, lymph nodes and cheeks, ground with a handful of seasonings and a dash of sodium nitrate. That's what's in it, say the unconverted with a shudder, but what is it? Is it a sausage or a condiment or a slurry of byproducts? To which I say: yes.

It's hard to describe the sound that chorizo makes when you slide it out of its packaging onto a hot frying pan. It sounds something like, sloooomph, followed by a sizzle and a dizzying sensation in your olfactory glands. All senses ignited, you watch the fat become molten and roll over each added ingredient in a tsunami of greasy flavor. All you do is stir and watch the heat. The grease and spices saturate everything in their path, a force of nature. Chorizo is the Chuck Norris of meat products. Chorizo does not "mix." Chorizo happens.

My mastery of chorizo didn't tie me to la raza, but when my baby got home and sniffed the air, his eyes filled with a strange glimmer — a mixture of hope and homesickness. I filled his plate twice and he ate every bite. The next night I cooked up the same, and the night after. A week later, the bloom was off the rose, and I got to put my feet up again while he cooked arroz con pollo. Chorizo, as it turns out, tastes of shame to some people. Delicious shame. It's an end-of-the-month-going-to-get-paid-in-a-few-days kind of food. Some of the best foods are (menudo, anyone?). If you're eating it every day, it means you need to find a job and/or a good heart surgeon. In the end, I left my chulo before I could poison him off with other dishes. I hope he has found a nice girl who can cook by now. As for me, whenever I'm in the mood, I make a run to the refrigerator case at WinCo. There, next to the soft Casero cheese and below the cheap dollar burritos, it sits waiting, bulging in its plastic casing, begging for release.

And so the dance begins again.

Quarter the potatoes and steam them until slightly tender. This increases their absorbency.

Cut open the chorizo and squeeeeeeeze it into the pan. Immediately use a fork to mash the chorizo into something resembling food, for aesthetics and even heat distribution.

As the chorizo begins to cook, slap it often with flat of a spatula. When it begins to bubble and pop, add the potatoes and mushrooms.

Do not worry about overcooking chorizo! Worry about undercooking it! As long as the heat is low and you keep stirring it, the chorizo will not burn. Let its flavor insinuate itself into all added ingredients. When it's gone crunchy around the edges of the pan, turn the heat off and sprinkle the mixture with cheese. Serve in tortillas garnished with cilantro, avocados and sour cream.

For a breakfast version, add a couple of eggs into the mixture right after the potatoes, stir and fry well.