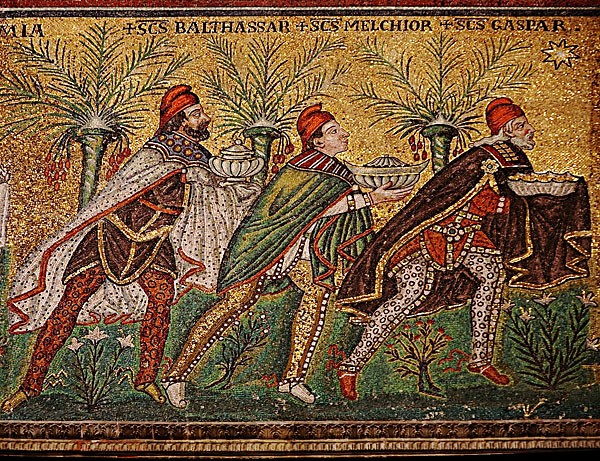 Maybe the author of the Gospel of Luke, written sometime around the year 80, wasn't paying attention to his sources. Why else would this educated Greek writer get the date of the birth of Jesus so wrong, by linking it to both the census of 6 or 7 (he references Quirinius, governor of Syria from 6 to 12) and to the reign of Herod the Great, who died some 10 years earlier?

Astronomers trying to assign a natural cause for the Star of Bethlehem face many such ambiguities in Luke's and Matthew's accounts of the nativity. Not only is the date in question, but the word "star" lends itself to various interpretations, as in: "wandering star," that is, a planet, or perhaps a conjunction of planets; "hairy star," i.e. a comet; "new star," meaning nova or supernova (short-lived outburst from an actual star); "falling star," or meteorite.

Perhaps the best explanation comes from taking Matthew literally when he implies there were actually two "stars." The first would have been visible to the Magi coming from the East at the start of their long journey, while the second would be the one shown in popular accounts of the nativity story, hanging over Bethlehem. Conjunctions of the two brightest planets, Venus and Jupiter, fit the story nicely. Here's how:

On August 12, 3 BCE, a close conjunction of Venus and Jupiter (just 12 minutes of arc apart, a fifth of the diameter of the full moon) occurred in the eastern dawn sky of the Middle East. This is the one that prompted the Magi to set out on their quest.

The following June 17, 2 BCE, saw another conjunction of the two planets, only this time they were really close, less than a minute of arc apart. To the Magi, it must have seemed the two bright objects had merged into one. The idea is that they set out after seeing the first conjunction and were nearing Bethlehem at the time of the second one.

Of course, having Jesus born in the spring would mess up our December 25th tradition, but this came later anyway, when Constantine adopted Christianity as the official religion of the Roman empire. (The December date may have been chosen by early Christians to coincide with the Roman festival of Saturnalia.) Luke tells us that the birth was celebrated by "... shepherds abiding in the field, keeping watch over their flock by night." Again taking the story literally, it's unlikely they would have been up all night in chilly December; they'd have been more interested in tending their charges round the clock during the spring lambing season.

Which is about the best science can do with the ambiguous gospel nativity stories.