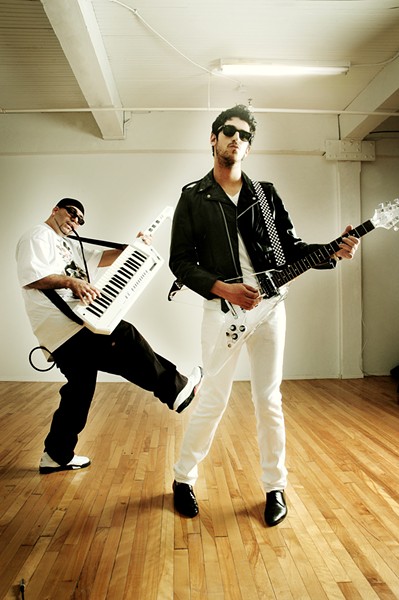 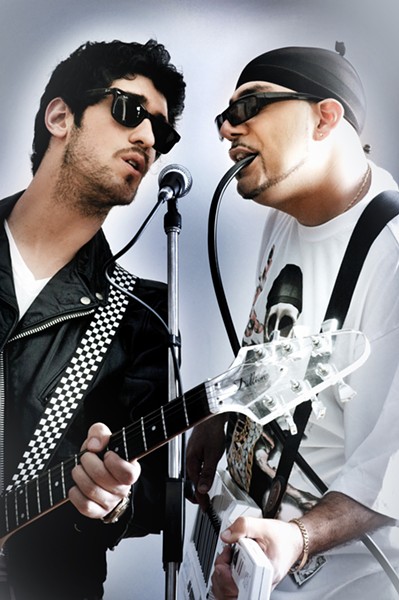 photo by May Troung Chromeo

Chromeo -- the name takes the Bard's tragic romantic hero and adds a modern gleam. The Canadian neo-funk duo consists of David Macklovitch and Patrick Gemayel, aka Dave 1 and P-Thugg, two friends who have been making music together since their high school days in Montreal in the mid-'90s.

The partnership began with Patrick joining David's band. "We mostly played organic funk, the typical bass, drums, guitar, vocal. There were no electronics at all," said P-Thugg, who was a bass player back then, but now handles synthesizers and the Talk Box a la Zapp and Peter Frampton.

"Now it's electrofunk. We got into hip hop back then and into samplers and more modern machines. At some point our friend Tiga, who was running a record label in Montreal, asked us to do something for his label. The label was more techno, but he thought it would be interesting to have some hip hop guys mix up the sounds a bit. We took our funk roots with hip hop and changed it a little to cater to electronic music. We figured out that was a great avenue to pay homage to the music we'd been listening to, the more electronic funk of the '80s. That's how our sound was born."

He says the sound they came up with drew inspiration from funk/soul acts like Cameo, Midnight Star and Hall and Oates, "different bands that used a lot of machines, but were also staying very funky." For P-Thugg, this was not nostalgia for music he'd grown up listening to. "I was born in Lebanon and grew up there. It was kind of hard to get American music or television over there. I basically rediscovered all that music collecting records as a teenager."

While Chromeo's music does not sample '80s funk, it maintains the electro-soul feel. "I'm fascinated by technology and machines, stuff like that, and this kind of music combines funk and technology, but with a certain innocence," said P-Thugg. "The machines they were using were just coming out in the early '80s and that became a time for some really weird and experimental amazing music, stuff that had not been heard before."

Chromeo's success lies in the duo's ability to make retro soul sound fresh and new. "The first love is the music -- working in the studio creating songs, listening to records, discovering new music together, trying to incorporate new things," said P-Thugg. "We're trying to create a career that's sustainable so we can keep doing this. I figure if we do it right, we'll be able to create whatever we feel like. I really just want to see where it takes us."

At this point it's taking them around the U.S. on something they call the Night Falls Tour, a two-month road trip, the band's longest to date, playing with another neo-retro soul star with hip hop roots, Mayer Hawthorne, and his band The County. When we spoke last week, Chromeo was in Miami; after the Midwest and Colorado it will hit the West Coast. Working its way from Seattle down to San Diego, the tour stops off for an AS Presents show in Arcata with Brooklyn-based remixer and "party maestro" Sammy Bananas opening.

The Chromeo and Mayer Hawthorne Night Falls Tour is at the Arcata Community Center, 321 Community Park Way on Wednesday, Oct. 12. Showtime 8 p.m. Tickets are $35, $30 for HSU students, at the University Ticket Office, 826-3928, or at humboldt.edu/aspresents.